What I miss out on when using an iOS device

Posted by Ryan Moore on April 14, 2014
I always like to think of myself as an open-minded person.  As such when an opportunity at work presented itself to use an iPhone for my work line I thought I'd give it a shot.

So, after a couple weeks I thought I'd make sure I gave it a proper go and fair shake.  I mean, I am an Android blogger, I wouldn't have started this blog if I wasn't a huge fan of the system.  So I knew there was going to be some items that I had to learn to deal with or get around in that realm.

I never wanted to ever write a piece 'against' anything.  That's not the way to behave.  When i reviewed an HTC 8X I thought I gave it an unbiased review, but I sure did receive a lot of hate for that video. 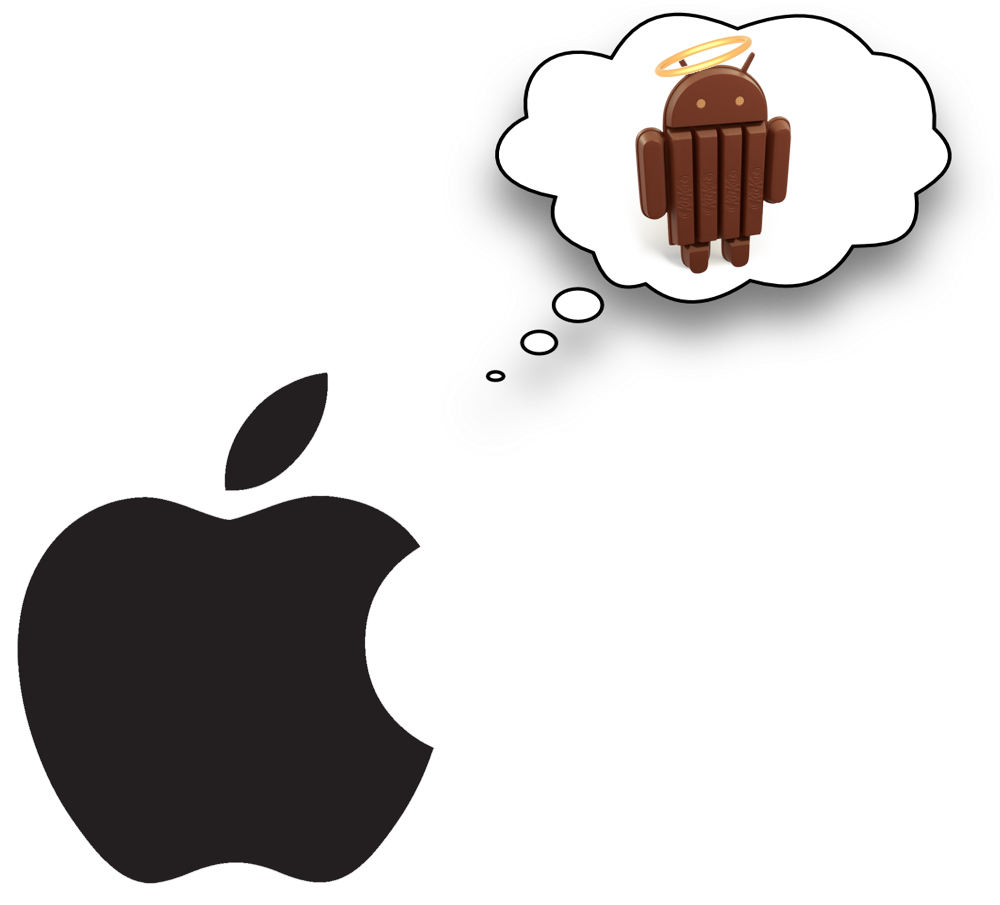 So, I'm going to try to be as fair as I can with this article.  I'm not going to 'poke fun', or talk about quality or even specific apps.  Just going to talk about every day usage and how there are things 'missing' from iOS that we on Android take for granted.

Duly note that this is just my opinion... in my own use case scenario.  For the comparison I'm using an iPhone 4S.  Which, hardware wise handles itself quite well for its age.  But this article isn't about that. 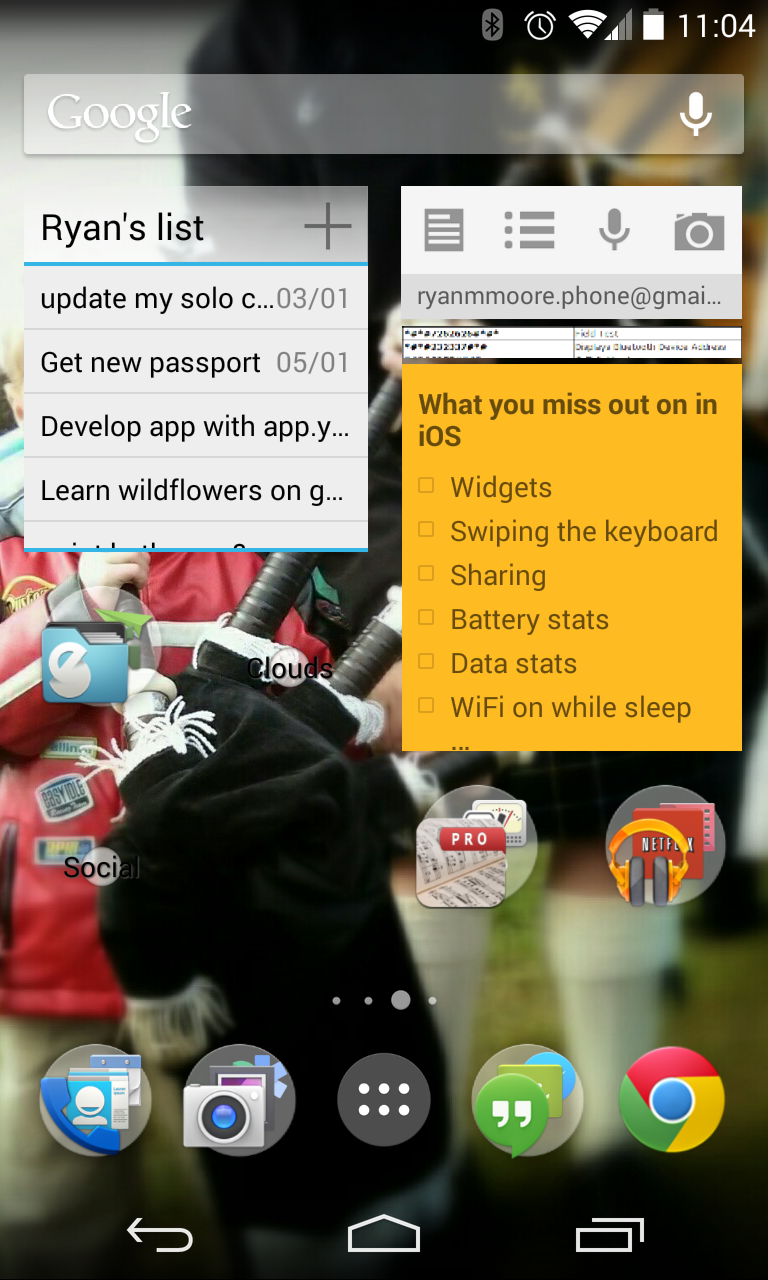 This is the first thing that a lot of people will notice initially on seeing an Android device.  And unfortunately there are even more users on Android who aren't really taking advantage of this feature.

On iOS your homescreens are a list of your apps that you have installed.  You can arrange them as you like, and put them into folders; however, they're still just icons.  If you want any info on an app you'll have to open it up.

On Android we can have a widget that will display information about the app without having to go into it.  Whether it's a calendar widget showing you your next appointment, or Facebook showing you some posts... or even quick actions like making a quick tweet.  Widgets are just handy.

Now, the counter argument to this is that there are a pull down shade for notifications and calendar in iOS and a sort of command centre for some actions if you pull up.  But they're limited in what they allow you to do.

Workaround?  Just deal with the notification centre and command centre.


Keyboard
I've been a long time convert to SwiftKey.  It has excellent prediction for the next word and continues to learn from the user.  Plus it has 'flow', which is that swiping ability.  Just swipe from t - to - h - to - e and you've spelt out THE ... get good at it and you're typing WAY faster than before.  But, there's not just SwiftKey, there's Swype, TouchPal, etc.. Even stock Android Keyboard has it built in.  Every keyboard you install can bring with it a new style, a new look and new layout.

I guess what I'm missing here is the option to have 'options' for my keyboard mainly.  On iOS you only have the one Keyboard.  You can't switch.  And for me, the big thing I miss is being able to not only swipe away my words, but change the layout.  Like if I want to write out a password that has letters and numbers it means I'm having to hit the ABC/123 button back and forth (whereas most Android keyboards either have another line for the numbers or the top row is numbers if you long press).  I also miss the prediction of the next word that Android has.

It's a small thing, but once you've tried it out, you're spoiled for life!

Sharing
One of the things we tend to use our phones for is sending people things.   Pictures being probably the top of that list.

On Android we can tap a picture and the share button (three dots in a triangle with 2 of them connected, making it look like a C).  Developers making apps can give that app a 'share intent' so we can then choose to share that picture with that app (i.e. Google+, Tumblr, etc...).

Workaround?  You'll have to go into the specific app you want and choose to pick the file form the camera roll.

Okay, maybe it's just that I'm a science-y guy that I like my graphs and stats; but you can't argue that they don't provide some vital information.  Often I'm told "my battery isn't lasting".  On Android device you can look at the battery stats and see how long it's lasted, how much time was screen on, etc... something to help you diagnose what might be at issue.

On iOS you just get a basic 'time since last full charge'.  Doesn't really tell me WHAT is eating my battery, just how long it's lasted.

Also, on Android you can have a graph of what apps were using your data.  And you can have full control on that with a cap and warning levels.  If an app is using a lot of data, you can cap that app specifically to not use 'background data' (i.e. not use data while it's not actively being used).

Workaround?  Well, the data you'll have to reset yourself manually every billing cycle.  For battery you can try to diagnose battery issues by trying to determine if it's 'sleeping' or not (check out +MobileSyrup's article they shared:  http://mobilesyrup.com/2014/04/10/ios-technician-dishes-the-goods-on-saving-your-iphones-battery-life/


WiFi sleep
I took this for granted to be honest.  And I doubt it's really a big issue or not, but I've found that if I've left my iPhone alone for a while, the next time I turn it on it'll be on 4G and not on WiFi, and when it wake up it does take a few seconds to switch over.

Android has this 'feature' as well, but I turn it off (I believe that it's off by default).  I don't know how much data it would consume (see point above) while it's in that sleep option... but if I'm in range of my router, I don't want it to use ANY cellular data.

Sure, there's a bit more drain on the device... but to be honest I don't really notice.  Plus, turning off/on the wifi radio has to be drawing about the same amount as it would be to just leave it on.

Workaround?  None... it's not a feature you can disable on iOS


Sharing from the camera on the lock screen
Above I talked about sharing photos and the limited opportunity iOS presents you.  Well, it is worse if you want to take a photo from the lock screen.

I do this a lot.  I see something I want to take a photo of, so I'll turn the phone on and both iOS and Android allow you to jump straight to the camera from the lock screen.  Normally I take the photo and then will want to share it to somebody or post to a social network, etc...

On Android, it works just as it normally does.  Swipe the camera to go to your photo (or hit the thumbnail), review and then share.

On iOS it has removed the share option if you review a photo while using the camera from the lock screen.  I can sort of see why.  Maybe you left your phone somewhere and some nefarious person grabs it and takes a photo they want to email themself or whatnot..

Workaround?  None.  It's a security thing (as far as I can tell)


Gmail/Mail & Calendar
Above I mentioned I'm a Google fan.  As such I like to use the Gmail app, and not the built in email app.  Which causes the phone some confusion.  If I want my contacts and calendar from my Google apps to come in I have to put it in the phone in the system, but ensure not to sync the Gmail.  It's just annoying to have to set it up that way ... to have 6 of one and half a dozen of the other.

On Android we can install an app, like say "Outlook" and it will sync in contacts and calendars from those accounts as well as the email, and the email will go into that app, and not the basic/built in email app.

iOS will not allow you to put in another account from another app (aside from the system) to bring in contacts or calendar.

Workaround?  Just have to add the accounts in the Mail settings but turn off Mail.  It works, but I shouldn't have to.


What I do like?  Well, I do get to play Angry Birds Epic early.  It is small enough to carry around, and given the age of the 4S it does handle itself okay.  The iPhone 5 is pretty thin.

Everything has their pluses and minuses, it's a matter of what you want most and what you'd be willing to put up with while using it.  For me the iPhone just has too many things I'd have to 'work around' or put up with.
Comparison features iOS missing