So we've had a fair bit of reviews on power lately.  Martin has done some reviews on Anker and RavPower portable chargers, and I'm here to show another alternative with +TYLT's Energi packs. 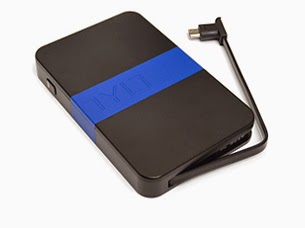 You've probably seen (I hope you've seen) some of my reivews of Tylt's other products.  I've done the band car charger and the Vu Qi charger and I've really been impressed with the quality of Tylt's stuff.  So I was excited to try out their battery charger.  With spring coming out it means I'm away from my charging stations for longer periods of time; meaning I'll need to have more battery power.

I bought my wife a PowerRocks recently so I wanted to see how it would stack up to the Tylt.  After using it for only one weekend and a couple of instances I have to say it's very good.  I was sent the 3K (see comparison chart for their other models below) and it was more than what was needed.  I had been living with a Motorola battery pack with 1800mAh.  Although it was perfect size, the battery life was a little less than I found I would be using.  At nearly double the capacity, it was almost double the size tho'.  Still, it fits in the pocket pretty easily.

I chose the 3K because it comes with the attached microUSB cable.  My wife's PowerRock is very 'sexy', but it also means that you have to carry a cable with you.  I want to be minimal with my accessories; so having the cable attached was awesome.

What I missed on it versus my Motorola was having a better battery indicator.  Tylt uses a single LED that has different colours for the different % ranges.  So if you see 'yellow' it's in that 30-70% range.. kind of a large area to guesstimate.

I did like how if you plugged in a phone it pretty much automatically sensed the phone and started the charge (on others you have to press a button).

The best thing about it was the output. Having the 3K's 2Amp output was really nice as it charged the phones much faster.  While we were out I could have my phone plugged in and use it and it was still having a good climb in %.  My wife's phone went from 30% to 75% in about 20-30 minutes.  Even while in use! (Just did a test and it charged my phone up 35% in just an hour) Keep in mind with the bigger battery it'll take longer to charge up (especially if you're using your work computer like I am right now).

When you compare any of line up below you'll see that the cost / mAh doesn't really change, so there's no real big advantage to go with the bigger devices unless you need the extended time to charge.  The big advantage of the 10K is the better battery indicator (it has 5 LED's that light up to show the remaining capacity, rather than a guesstimate range).