Posted by Ryan Moore on April 02, 2014
Another month has gone by.  It's hard to believe that yesterday was April 1st.  Sure there were several jokes going around... but realizing it's April 1st and the first day of APRIL are 2 different things.  Especially as our April 1st here in Thunder Bay meant 20cm of slushy frozen rain everywhere (my car was an ice turtle this morning). 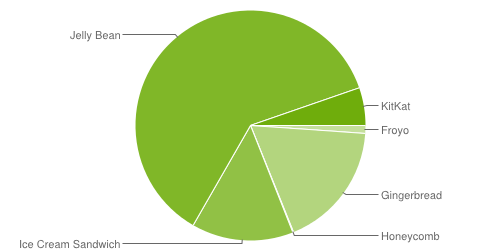 With the passing of the month, Google passes out their monthly data on the Android Platform Distribution.  This set of data lets us see what devices out there are running which version of Android.  March saw that the S4 and Note 3 as well as some Sony and the G2 got Kit Kat.  As such, you'll see a pretty big jump, and as more folks do the update you'll see a probably bigger jump again in April.

Now I've gone and tracked this information historically on our Databases Page if you'd like to see the growth over time.

I love me some graphs.