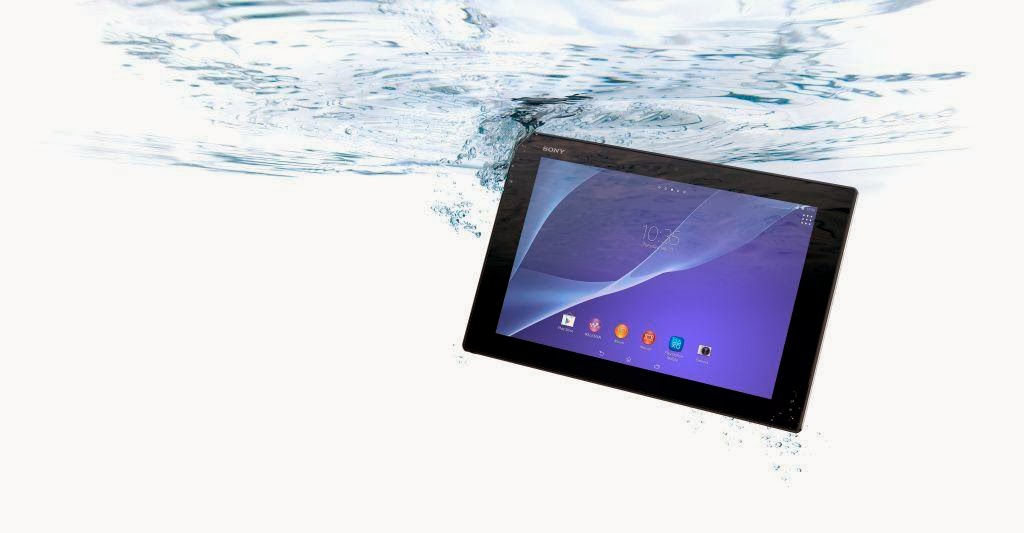 Finally, Sony will release a new proper tablet. The Xperia Tablet Z, released last year had a good run, but was starting to show its age. Sony has decided to revamp it and will be releasing the Sony Xperia Z2 Tablet. The Tablet Z was heralded as the thinnest tablet on the market, and Sony has decided they will not be dethroned.
The Xperia Z2 Tablet measures in at a slender 6.4mm and weighs in at only 426g for the Wifi and 439g for LTE model. Similar to the Xperia Z2, it will be sport the Qualcomm Snapdragon 801 processor at 2.3 GHz with Adreno 330 backing you up for all your graphical needs. It also comes with 3GB of RAM to keep you going with all your apps open.

The Xperia Z2 Tablet comes with a 10.1” Full HD Triluminos display with Live Colour LED technology. If you don't know what that is, check the Z2 article for more details. Sony claims it will give you a realistic viewing experience, but we will have to see to find out.

Similar to other Snapdragon 800+ devices, it will come with Quick Charge 2.0, giving you considerably faster charger. My experience with this has been finicky, as you need an adaptor and cable that can deliver. Speaking of batteries, Sony has crammed in a 6000 mAh lithium polymer battery, and they promise to be able to deliver 10 hours of uninterrupted media usage, or 100 hours of music playback. We shall see…

This wouldn't be a Sony flagship device if it didn’t have waterproofing, and the Z2 Tablet is no different. It is certified with IP55/58 waterproofing, so you shouldn’t have an issue taking it for a dip, if that’s your sort of thing.

Sony has always fell short in the audio experience on their devices, and they hope to fix that this time around. The Xperia Z2 Tablet will feature Sony’s front surround audio technology. I hope that translates to front speaker grills. It will also make use of Digital Noise Cancelling technology which, when paired to one of their digital noise cancelling headsets, claims to be able to cut out 98% of the ambient sound. Great for the plane ride next to that crying baby (sorry everyone).

Sony has also opted to put two camera sensors on there, but they aren’t quite the caliber of the Z series phones. On the back, you will find an 8.1 MP camera with Exmor RS for mobile. On the front, Sony has put a 2.2 MP camera for chat and selfies (of course).

A tablet is no good without it’s accessories, and Sony is releasing a barrage with this tablet. The main addition is the Bluetooth Keyboard and Tablet cover stand (BKC50BT), which is Sony’s attempt to fill in their lost laptop market. Sony has been pretty bad at keyboard cases in the past, so here’s hoping they will take a book out of their Vaio Tap design. They will also be releasing a Bluetooth Speaker dock with magnetic charging pad (BSC10), to make use of the magnetic charging pins that Sony is in love with. The other accessory of note is the Bluetooth remote with Handset functions (BRH10). It will allow you to control media functionality as well as handle “telephone” calling. Clearly Sony is gunning for the boardroom with these additions.

The Xperia Z2 Tablet will be available this March and will come in Black and White variants, as well as Wifi and LTE variants. No details yet on Canadian availability. Keep your eyes peeled here for more information when it becomes available.