Posted by Ryan Moore on January 22, 2014
One of the few reviews that I've done that I just don't want to do... not because I dreaded testing out this device, but because that would mean that the testing time has come to an end.

LG hasn't been a lot of folks' top brand for a while.  It's kind of a joke at my work.  Apparently some folks are able to look beyond the sins of the past.  But I have got to give it to LG.  They have really REALLY produced some nice items in the past while.  There was the Optimus G that I really liked.  Then the Nexus 4 (sibling devices) and then of course the G2, which I loved!, and the Nexus 5 (not quite as closely related to each other as the OG and the N4). 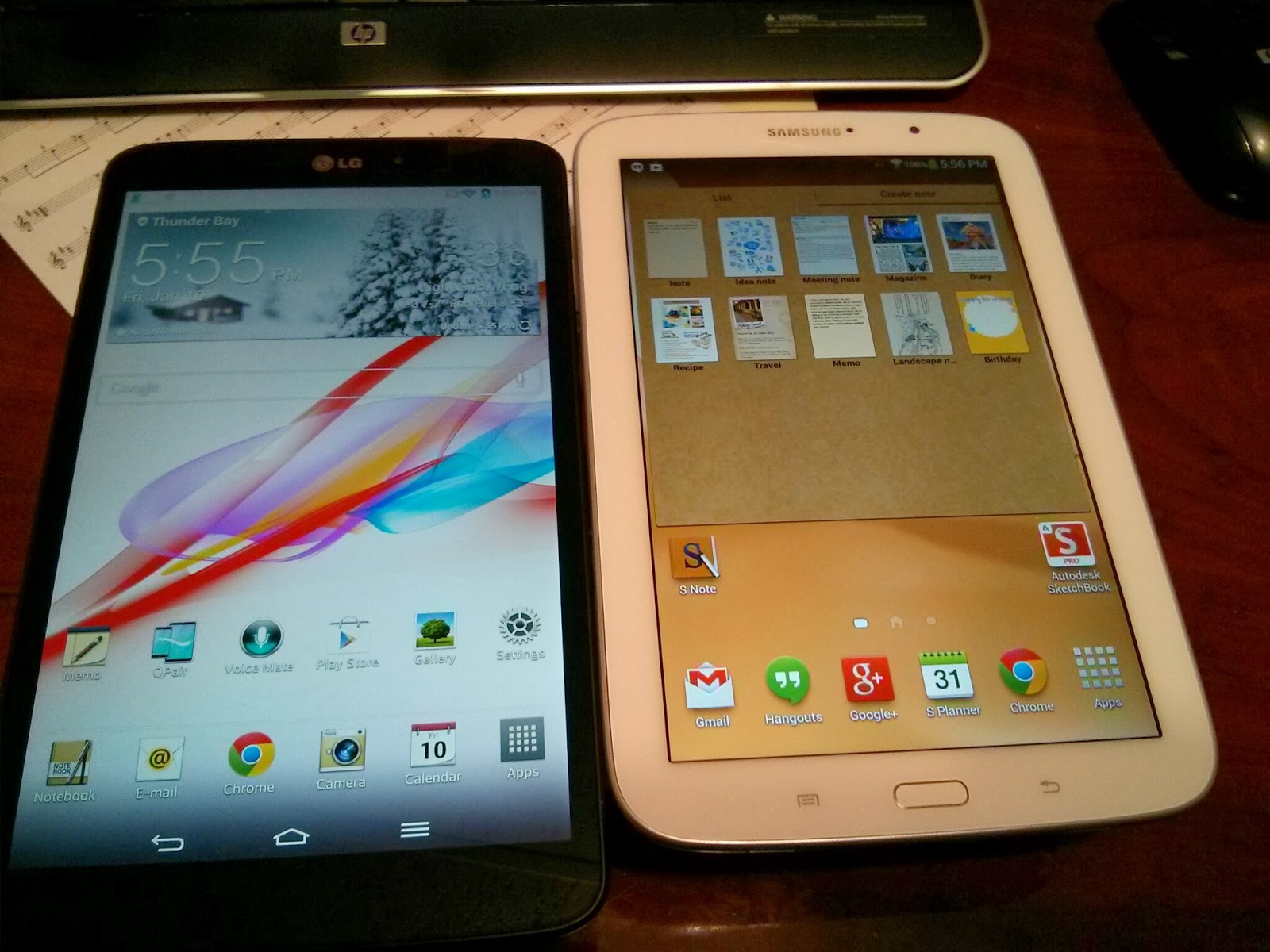 Now enters the LG G Pad 8.3.  When I had reviewed the Note 8 during the summer I really liked that 8" size.  Not as large as a 10" tablet (which I felt was too big) and not as small as a phablet or 7" tablet.  It was just right.  I ended up buying the Note 8 over Christmas... but only because I could not find where to get this G Pad.  I now wish I had been a little more patient (and Future Shop stocked it).  It is available through NCIX and NewEgg.

So let's dive in and see what this device offers: 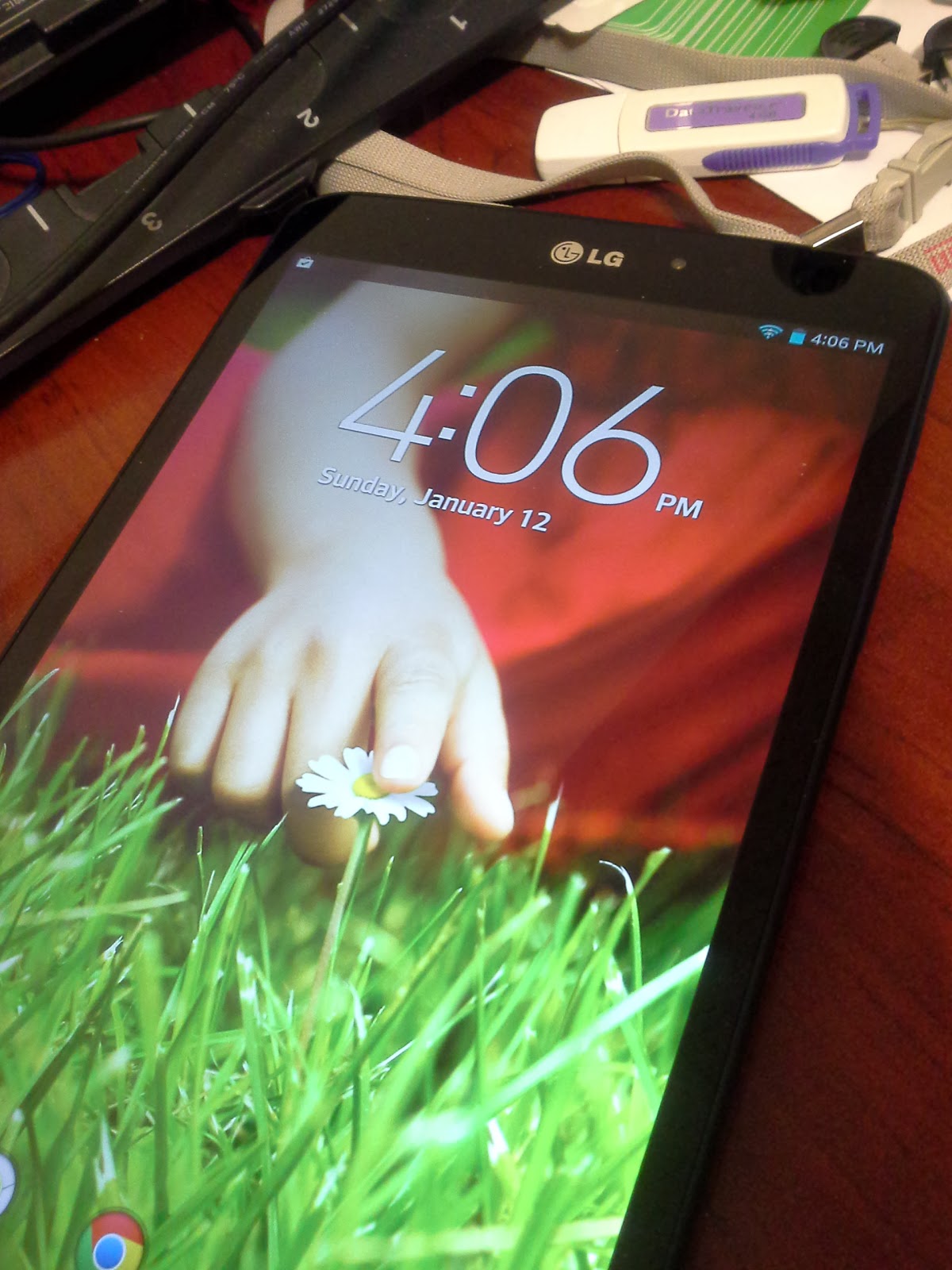 In terms of physicality this is definitely heavier than the Note 8, this owing to the fact that it has a nice metal backing.

Speaking of the back, both speakers are there... true stereo.  And on the back means you won't cover one while playing a game.  But in portrait mode they're one on top of the other, and really only 'side by side' when in landscape mode.

It's only slightly taller, and is actually even thinner than the Note 8. But the screen... that resolution sure is gorgeous and the colours are just amazing.

Essentially take the G2 and make it 8.3" (minus back buttons and NFC).

Saying it's the G2 also means that it comes with LG's fully suited UI.  Including features like: 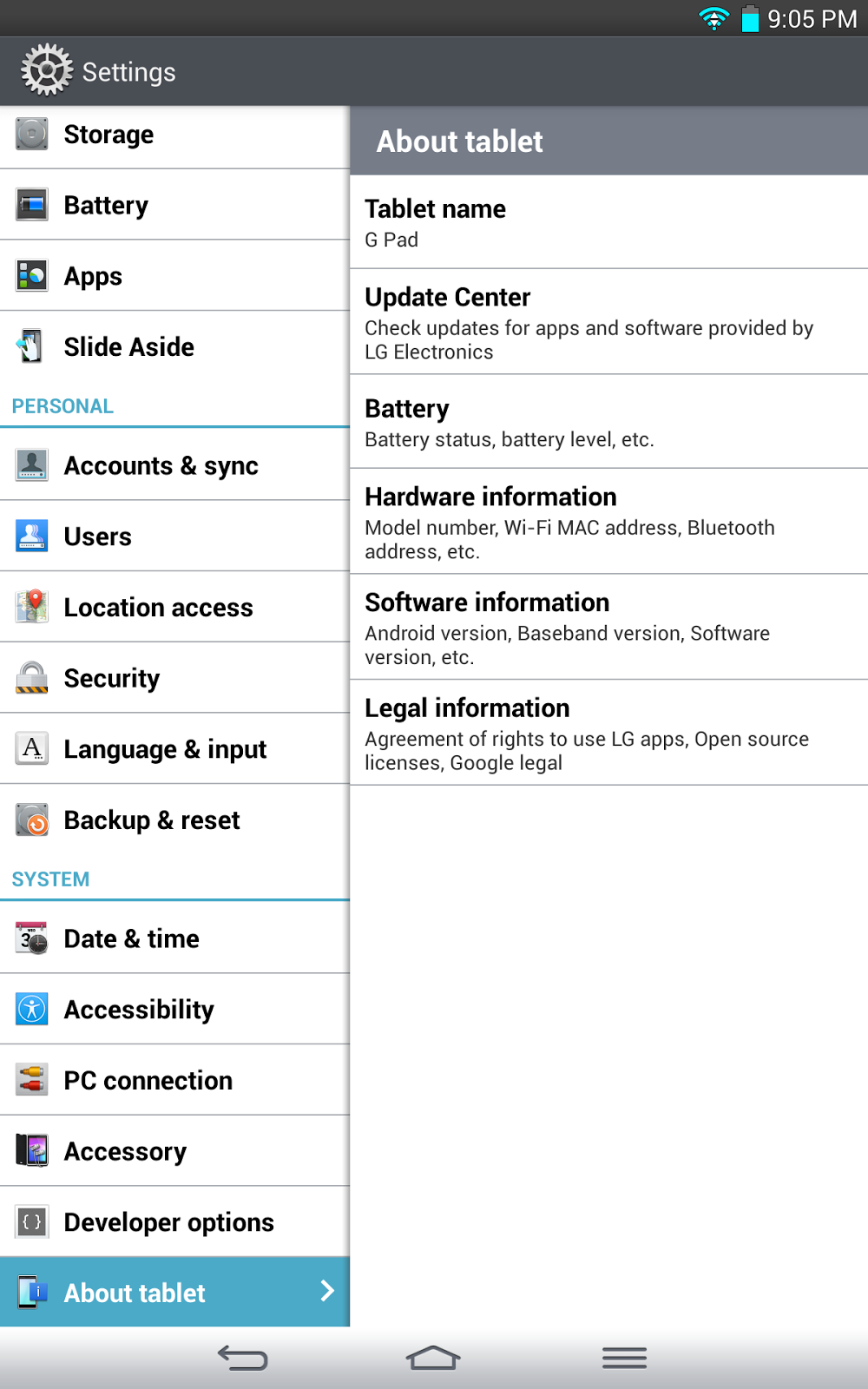 (you'll want to change the font tho'... not big on their Gothic font)

Check out my review of the G2 for more descriptions on what those can bring to the table:  http://www.androidcoliseum.com/2013/10/lg-g2-review-man-are-we-in-for.html

All in all it's my favourite phone, just bigger (I still wish it had NFC). But where it gets slightly better than the G2 is that it starts to include some tablet options, like MultiUser and QPair.

MultiUser is just like it suggests let's you add other users to your device so they can have their own apps and settings.

Only issue would be that the device I have is only 16GB... so there's not a lot of wiggle room for other users.  Even the G2 had 32GB.

QPair allows your tablet to be an extension of your device... share links, texts, etc... This is always a great feature.  You can share notifications, get internet and even see the last app used on the phone. 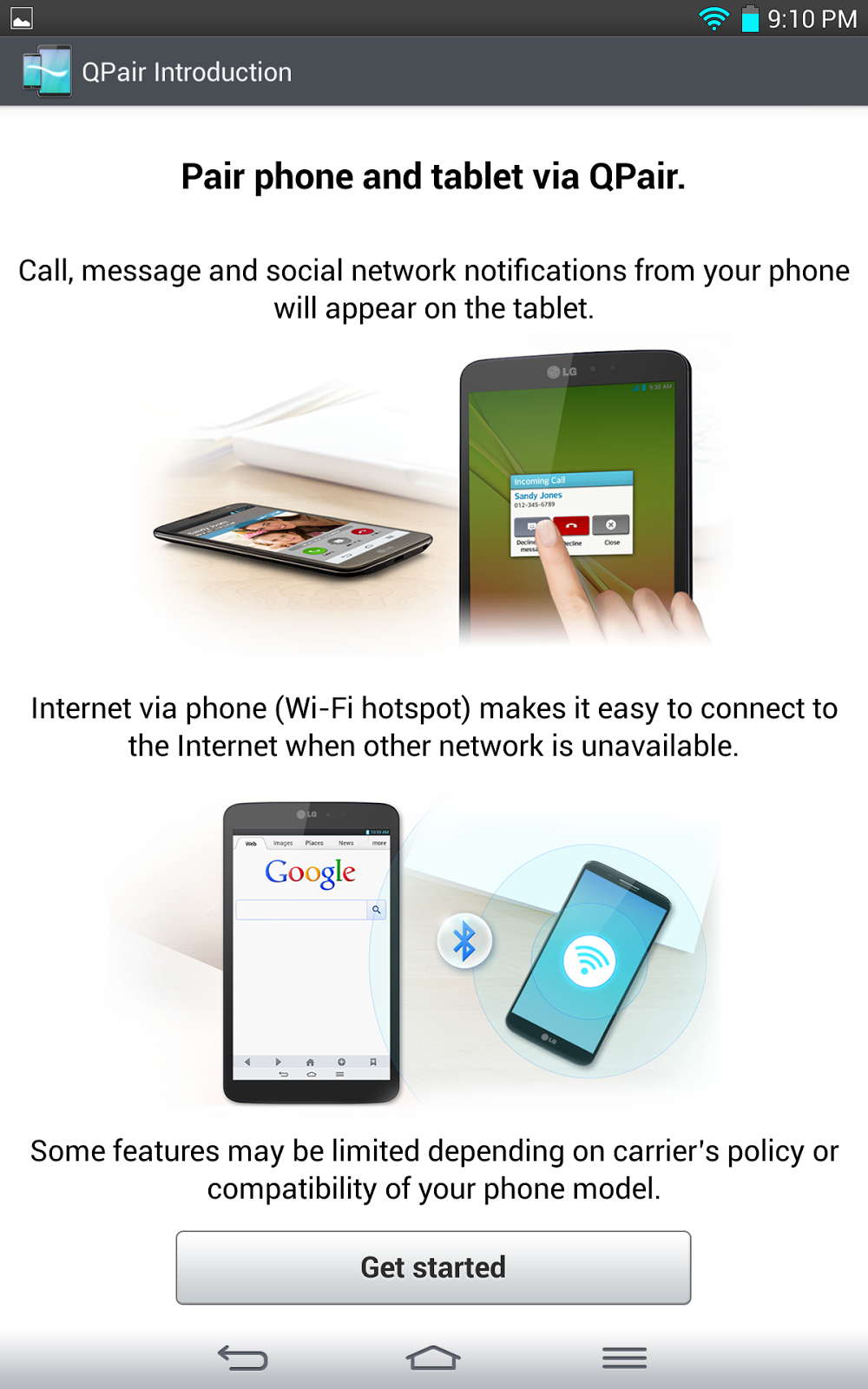 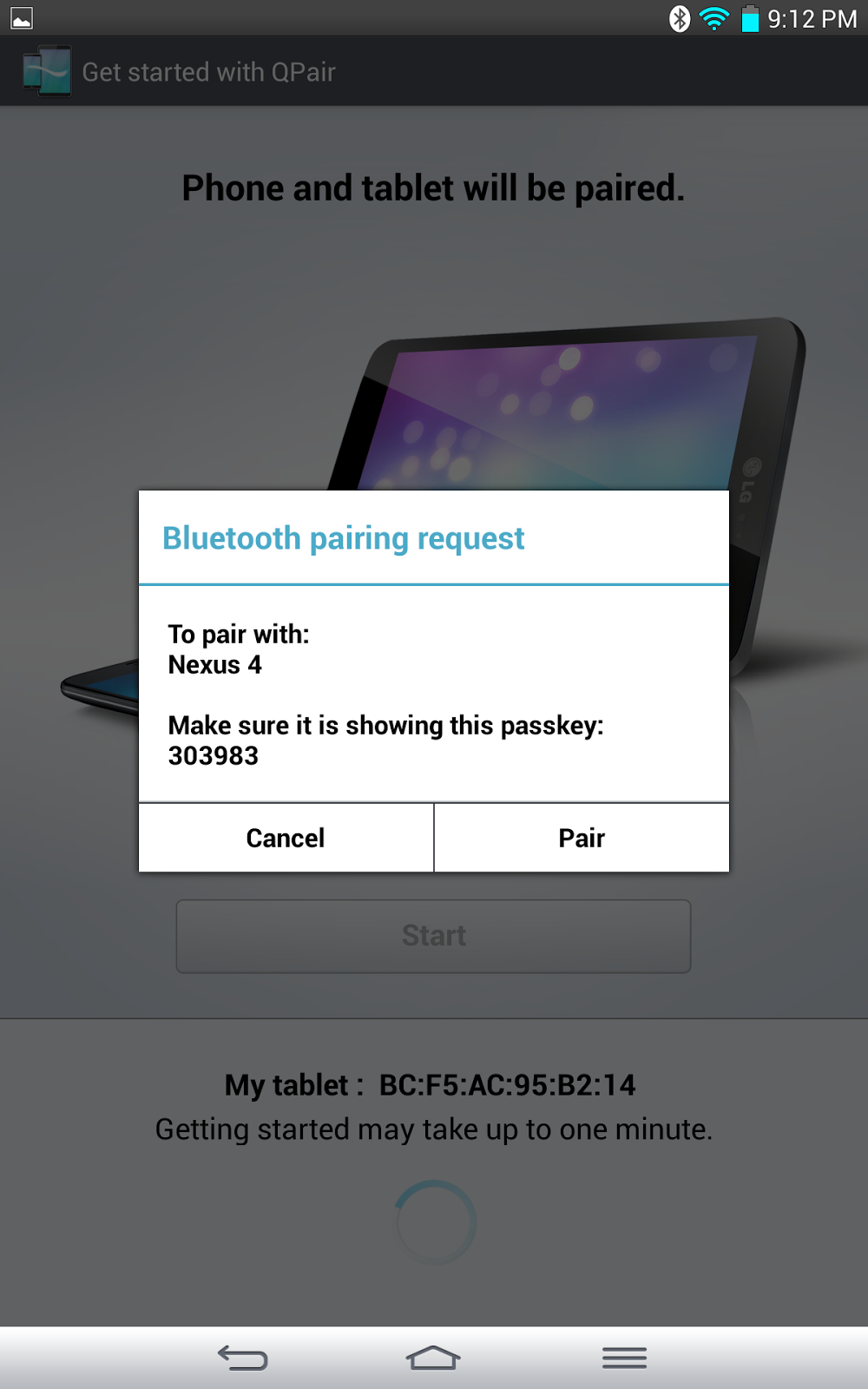 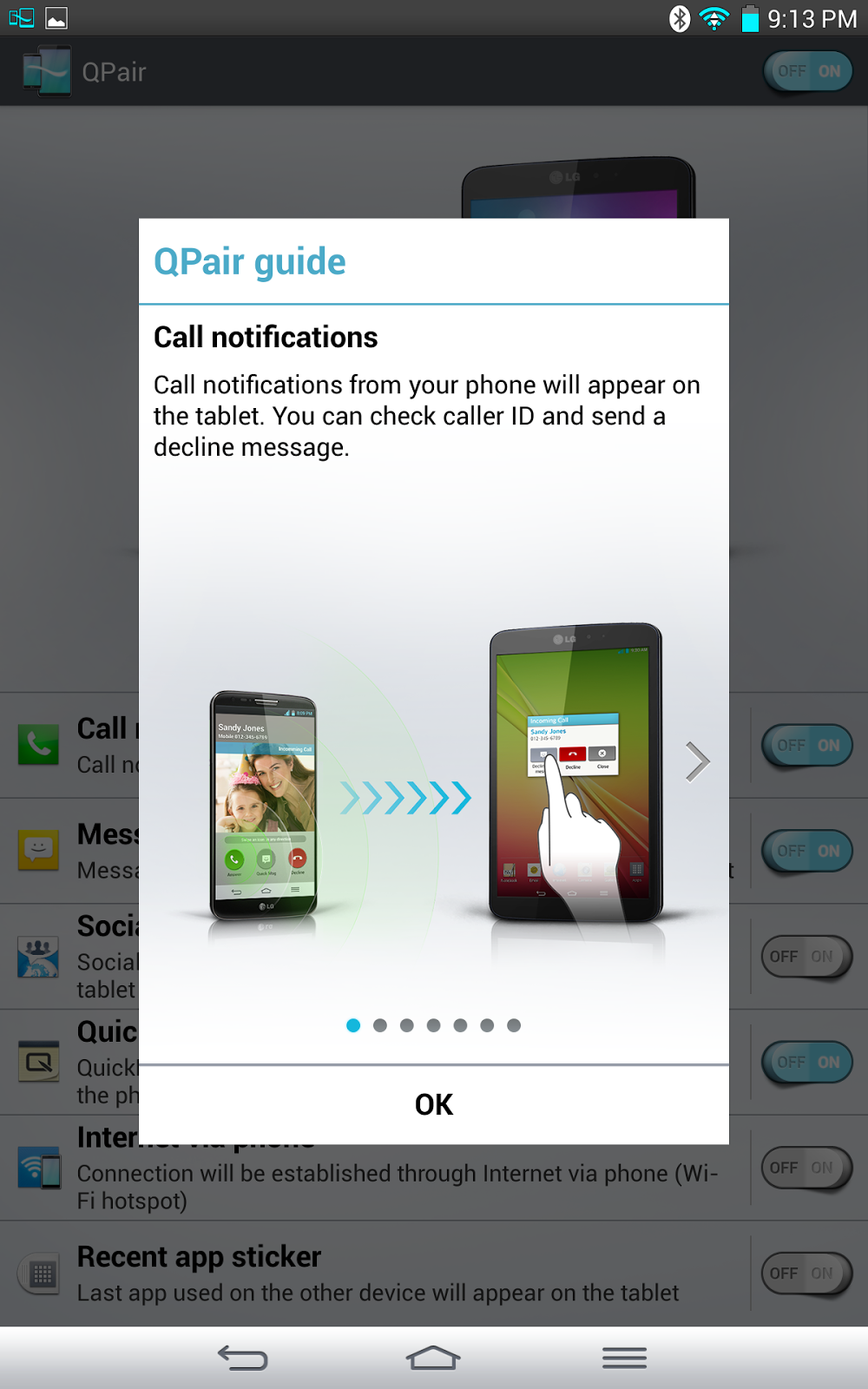 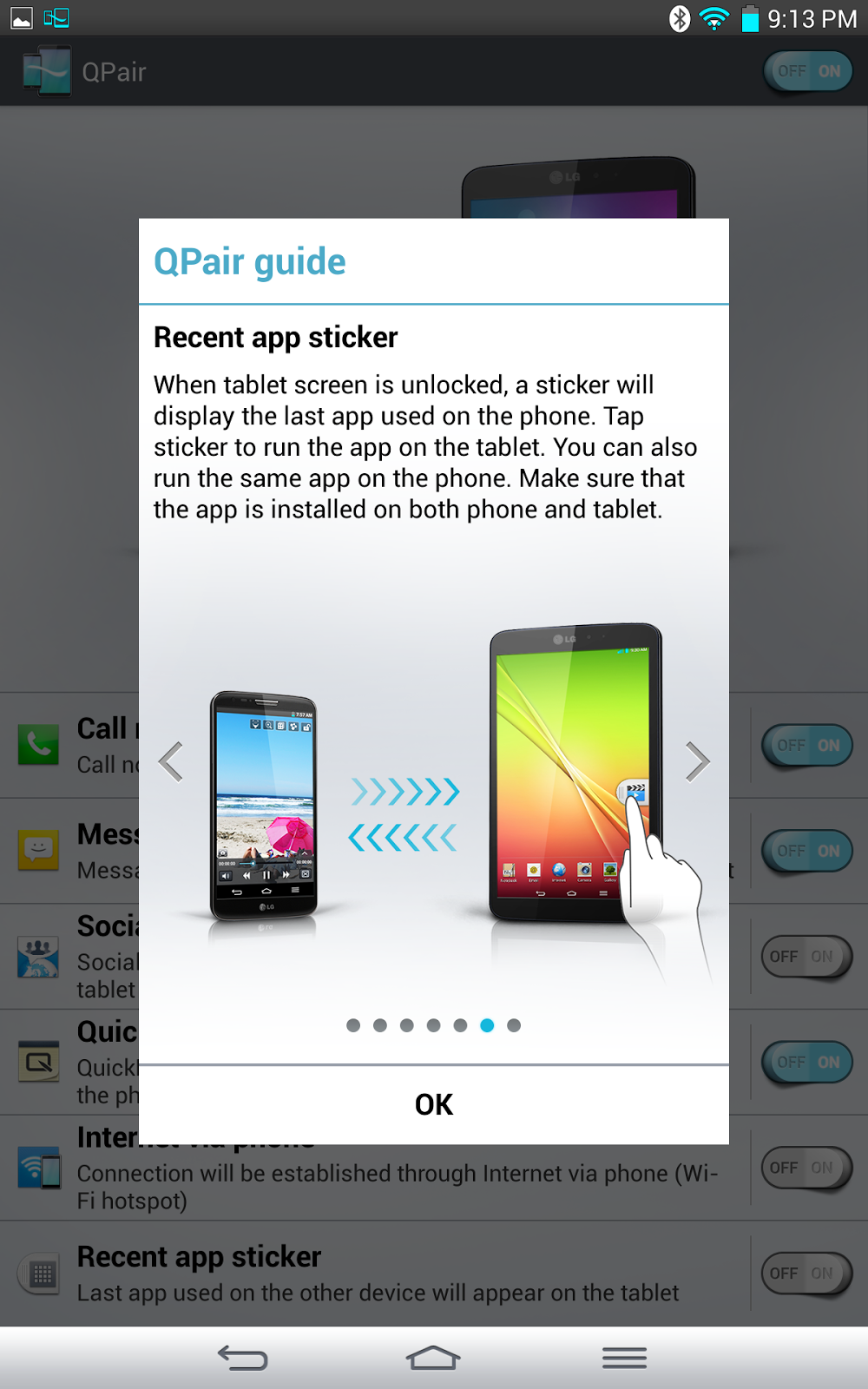 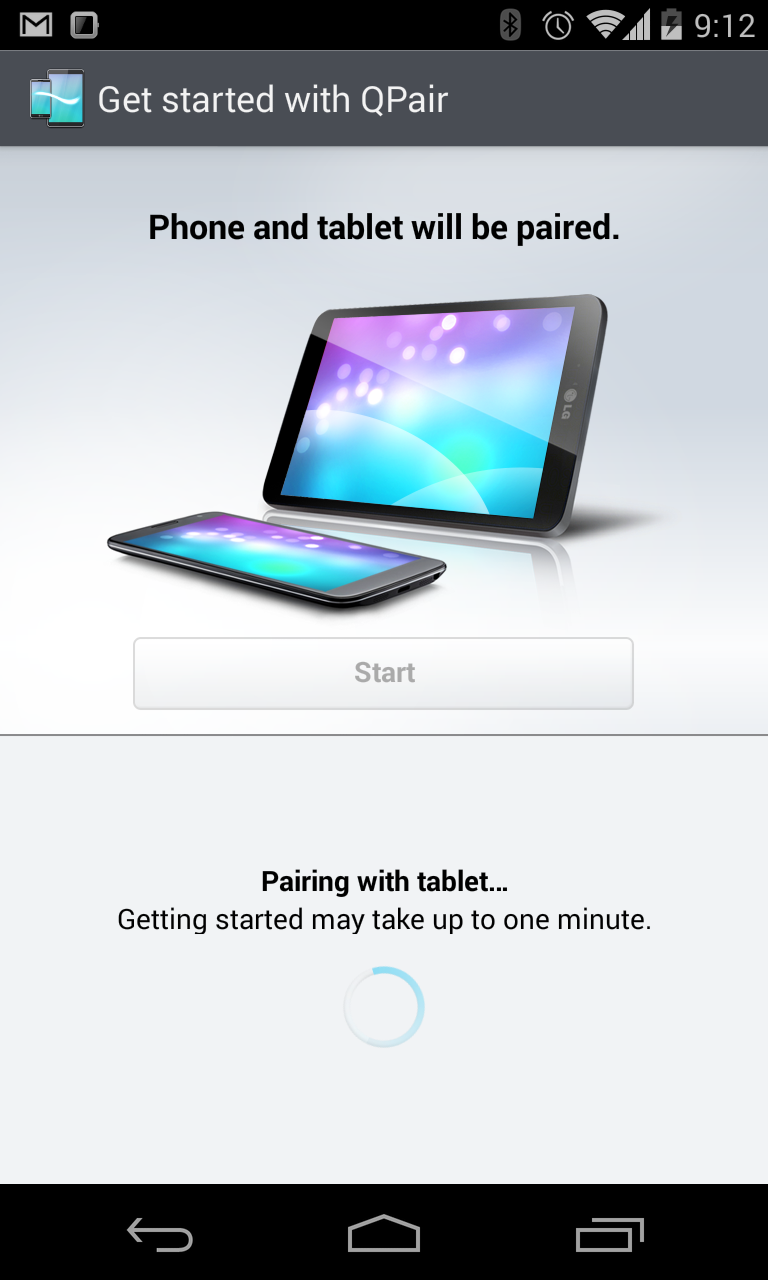 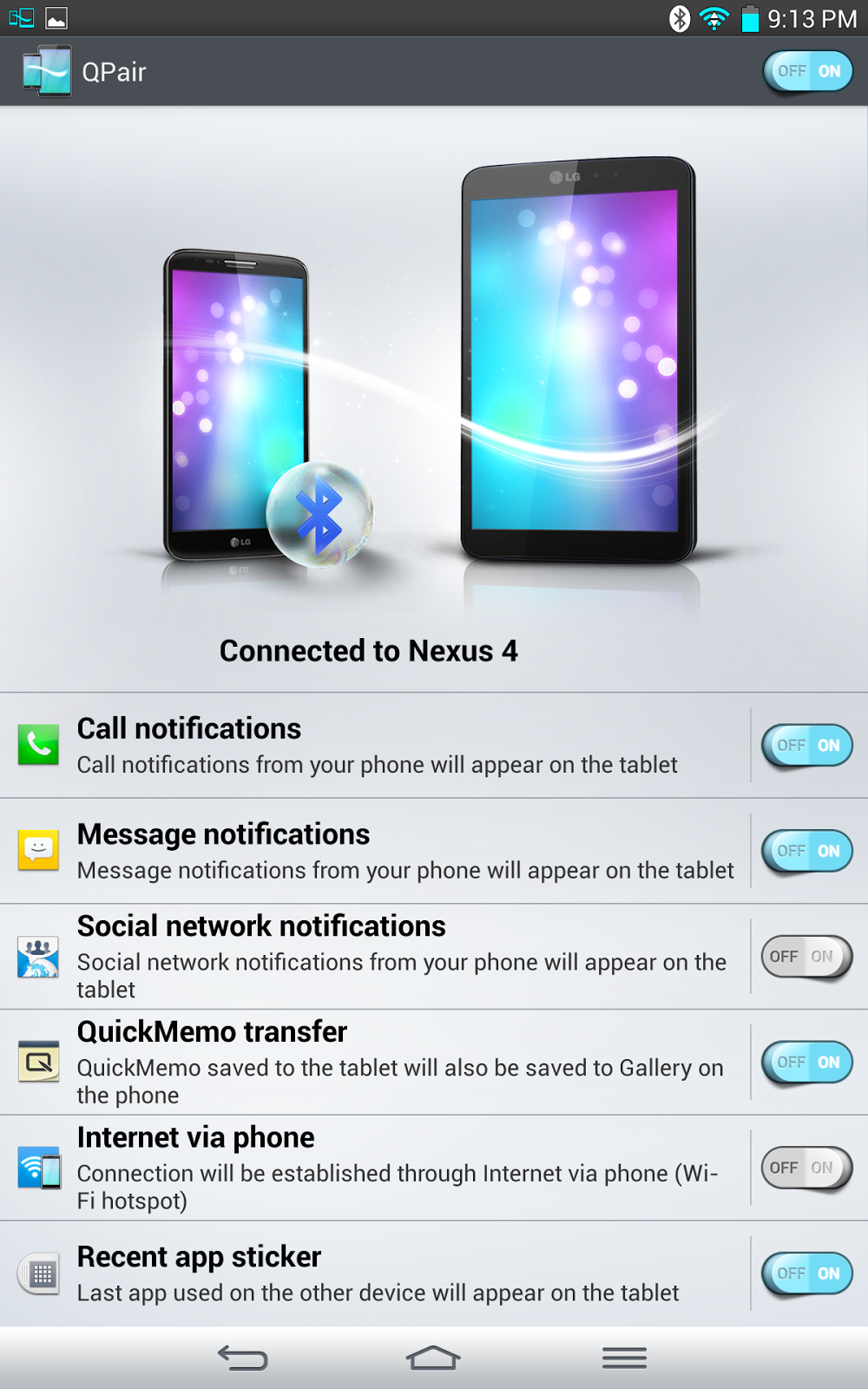 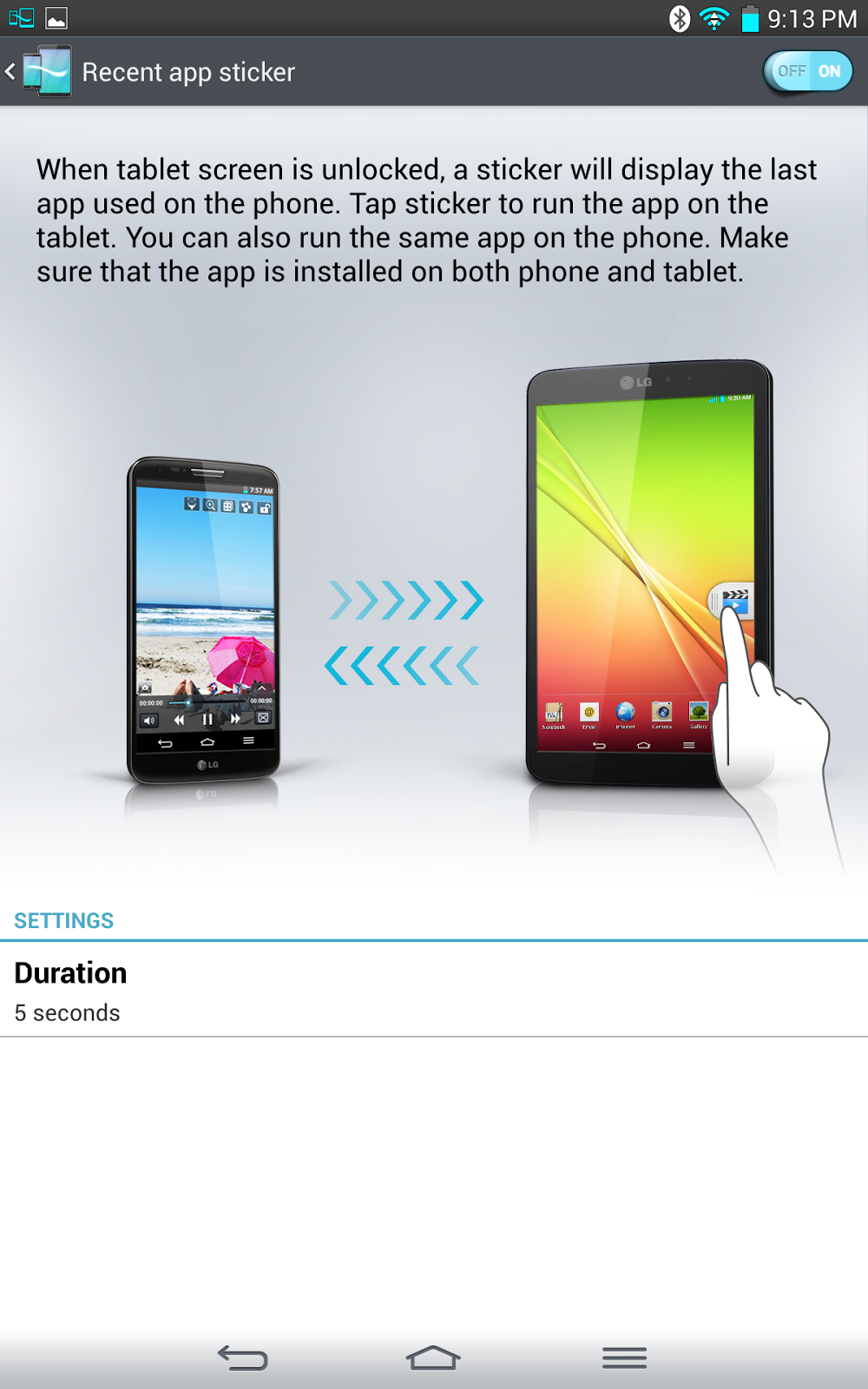 Overall the device performs admirably.  A little slow at times, but outperforms my Note and my Nexus 4 actually.  And this is running the heavier apps/games.

I have yet to see this on sale anywhere, and it's really annoying because I want one.  Anyone want to buy my Note 8?  Even trade!

When I have seen it posted for sale online it was going for $350 for the 16GB, and I haven't found any bigger options yet.  So, not the cheapest tablet out there, but a really good deal.

I'm not sure I'd be enticed by a Google Play Edition device, as I kind of like the added features LG throws in.

Pick it up at NewEgg.
G Pad LG Review tablet