Uploading Photos with Picasa on Kitkat 4.4.2

There's a few people who say, "Picasa is dead". I personally tend to somewhat disagree, it's just integrated into Google+ and Google Photos now. 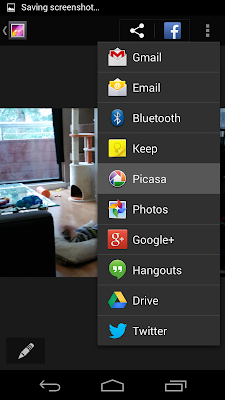 Unfortunately Google decided to remove this ability to upload to picasa on 4.4.1 and beyond, now you're only left with the "Photos" option below picasa in the picture above.
Though you may have never used this option before, it was definitely a valuable one. When taping the picasa button when uploading a picture, it would ask you which album you'd like to upload it to, and also the ability to add a caption to said picture.
This went a long way in keeping your online albums clean and organized.

Since Picasa now gone since OS 4.4.1 we're left with Photos to upload to our online galleries, the bad thing about this is it simply uploads to an "Auto upload" folder with no option to select which album.  You'll have to manually sorted out at a later date, you're left with a single album with no organization of content. 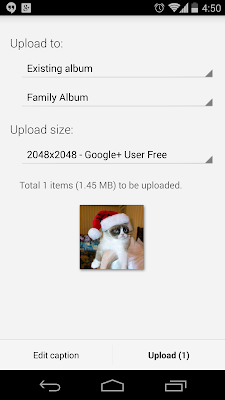 Thanks to the app Tool for Picasa, Google+ Photo, it brings back nearly the same options that was taken away from us on OS4.4.1.
When clicking on the newly downloaded Tool for Picasa, you're presented once again with the option of what album you'd like to upload to, as well as size and caption options. Why Google ever took this away from us I'll never know, but at least we can add this function back, and for free.