Posted by Unknown on November 06, 2013
As much as this is new, for some of us, it is not anymore. It's been extracted from the new KK and shared all over the internet. I'm not here to share the APKs since other blogs did already, but here's what I think of the new Hangouts app. 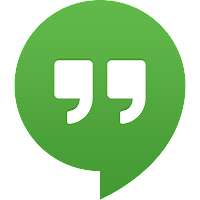 We've been through times with Google Talk and Google+ Messenger and I'm happy that Google is now wanting a one-app-for-all in Hangouts. Damn it's refreshing! You can now manage your SMS within Hangouts. I had my doubts that the SMS function in Hangouts would ever be available in Canada since we're often left out, but I was wrong because it is! Now only one instant messaging app that can fully satisfy us. No other SMS app; Hangouts only it is!

When you go into the settings, you clearly see you can have separate notification sounds for your SMS and your Hangouts activity since their settings are kept separate. I've installed Hangouts on my Nexus 7 and it doesn't show the SMS settings. For now, if you want to text from your tablet, MySMS (or another app like that) is still needed. Do you wanna bet it's a feature that will come at some point in the near future? It's simply a question of synchronization between your devices, as long as one of them, usually your cell phone, can manage to send and receive the SMS...

Have you ever factory reset your device and reloaded a ROM just to realise that you forgot to backup your SMS? I think that now your SMS are saved into your Google account just like your Hangouts conversations. If so, installing a third party app to backup your SMS might have just become obsolete.

The new app is just plain awesome, and from I hear, it can only get better ie. Google Voice integration... but that's speculation we'll keep for 2014.

Tell me, have you side loaded the new Hangouts apk and pledged to only use this last one and ditch the rest?