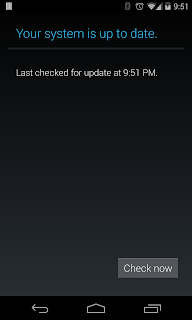 Looks like a new(er) version of Kit Kat is rolling out.  I hadn't heard of anyone who had received the OTA of the first built (KRT16O for my Nexus 4) yet, but it seems that +Ryan Lestage (a Canadian no less) is receiving his (private G+ post).

So, what does KRT16S provide?  Dunno... but it looks like it's out there for all devices, as you can see from the Factor Images provided by Google:  https://developers.google.com/android/nexus/images

I haven't received the OTA for my device (nor the Nexus 5 review device I'm using at the moment - but on the Developer's site it's still got an 'M' build).

Check your system update now, or sideload again, like I showed you previously.