Lenovo limbers up and introduces us to the Yoga tablet

Posted by Ryan Moore on November 01, 2013
Lenovo, not a name you hear much when it comes to Android, but it looks like they made a big splash Wednesday with the introduction of a new style of tablet - the Yoga (probably got lost all in the hubub of the N5 and 4.4)

(I can't help myself saying it in the voice of Dhalsim)

It is pretty reminiscent of the Notion Ink Adam with the round cylindrical top (in this case bottom).  Introduced to us by the man playing Steve Jobs, Ashton Kutcher (feel free to make your "Steve Jobs would never introduce an Apple product... well played Lenovo), it's an interesting looking device. 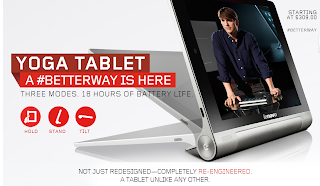 It comes in either an 8" or 10" size (both Cass and I love the 8" Note, so this will be interesting) and the interesting thing is that 'cylinder'.  I imagine there's more battery power that can be stuck into it, and you can't argue that it wouldn't be easier to hold.. it's just reminding me of a broken netbook. 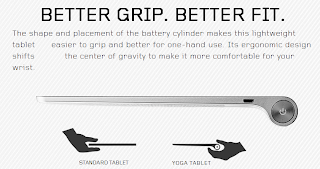 Ashton seems sold... more so than with his cameras?

I'm hoping to give this one a try soon.  What do you think about the design?