Posted by Unknown on September 27, 2013
With the Xperia Z Ultra and Xperia Z1 on the horizon, you may wonder why you should care about the Xperia Z anymore, but there are plenty of reasons why you may be interested. Perhaps you want a good phone without paying premium, but still want some of the features from the premium device? Perhaps you don't want a huge phone? Any of these reasons could compel you to go with an Xperia Z. But is it really worth it? Check out our review to find out!

The Xperia Z is a well built device. It has a front and rear glass back with glass along the edging. It sports a 5" TFT LCD screen with resolution of 1920x1080. It is slightly larger than its ZL brethren which is due to its IP55/57 water-resistance certification. 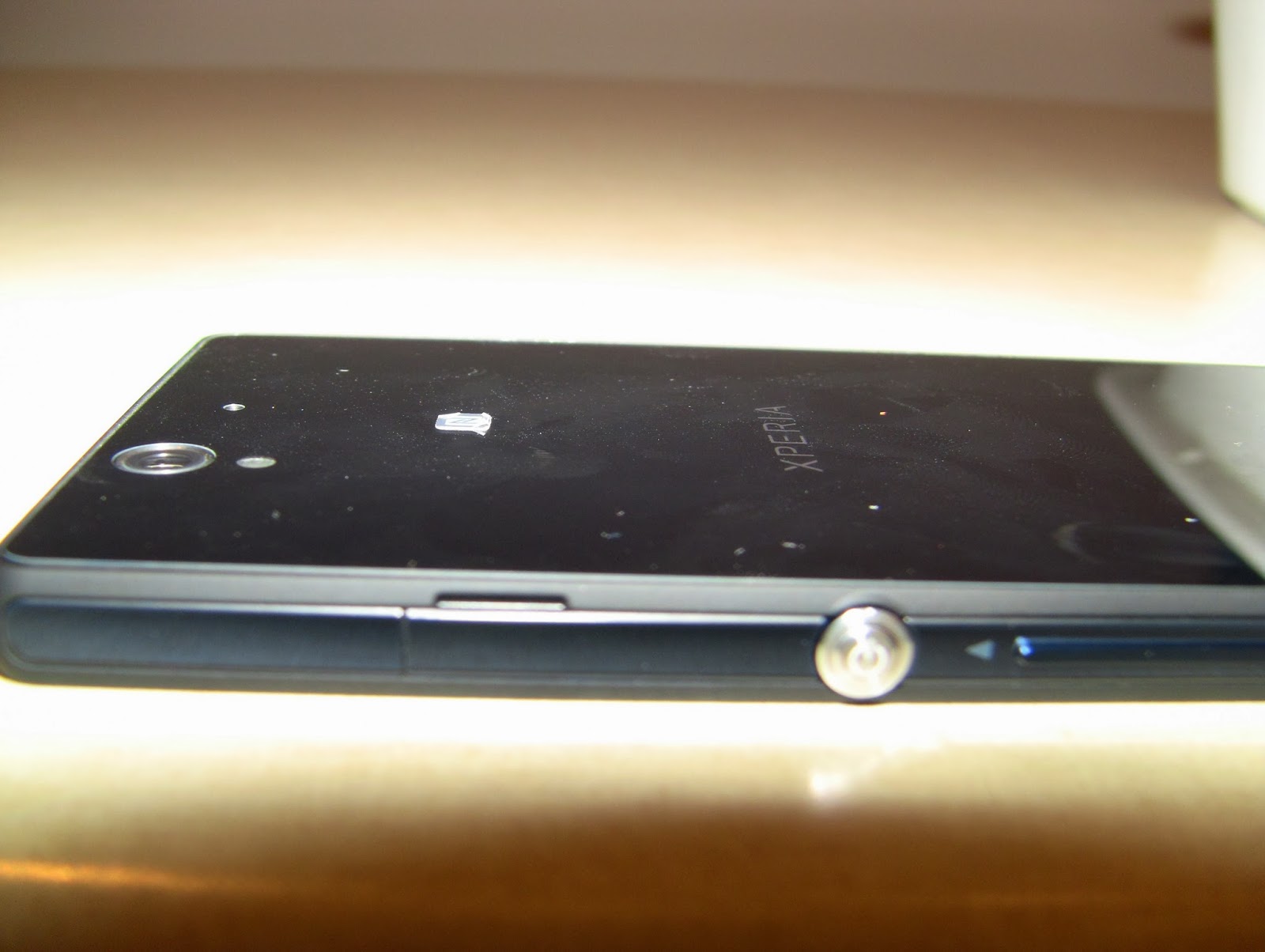 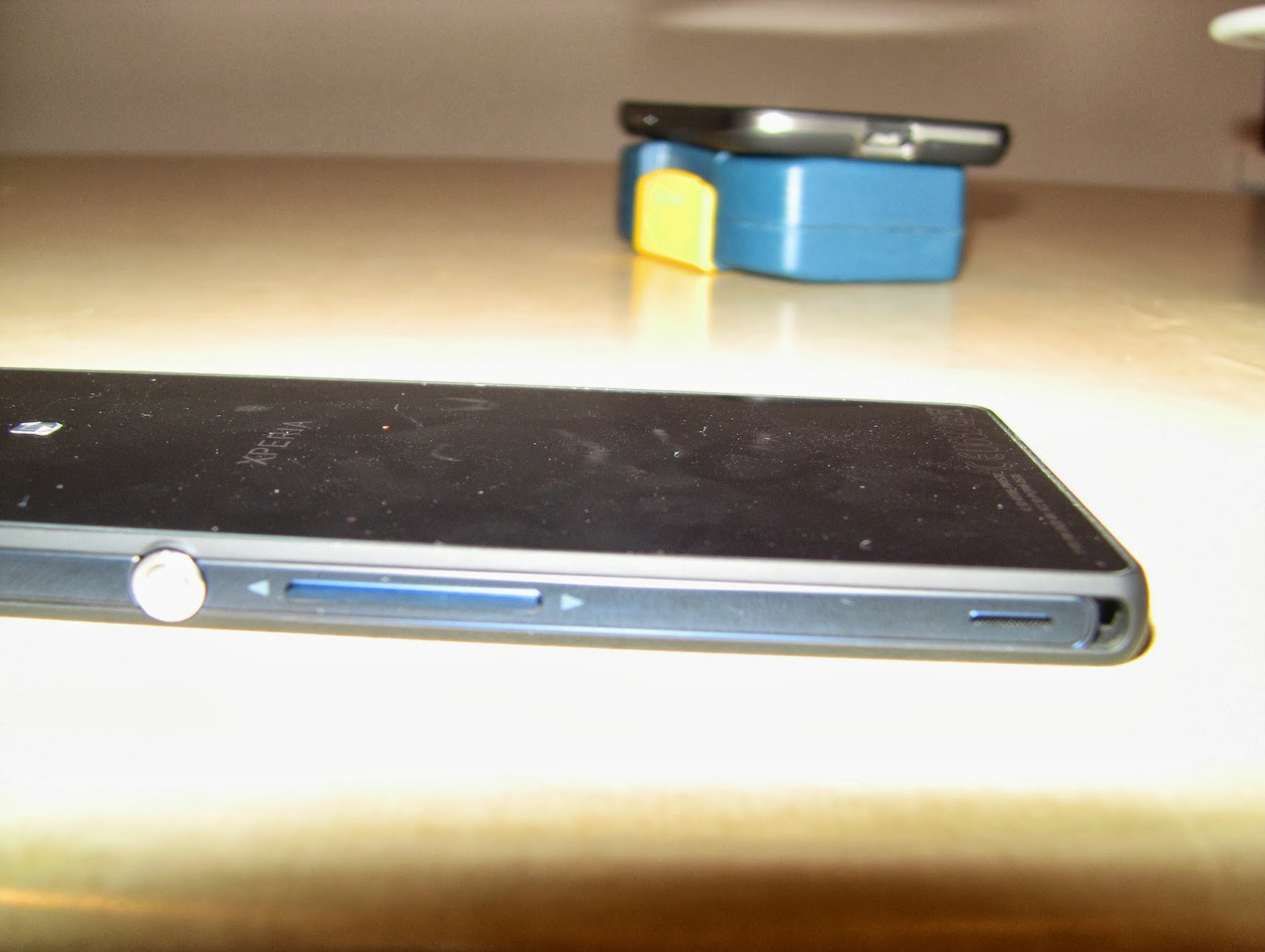 Most of the action on the device is along the right edge. Sony has placed their signature round power button near the middle of the right edge with the volume rocker below it. Unlike the ZL, there is no dedicated shutter button, which was a sad omission. Instead, the tiny speaker grill takes up that spot (more on that later). At the bottom corner is a hole to allow you to add a strap (extremely popular in Japan). 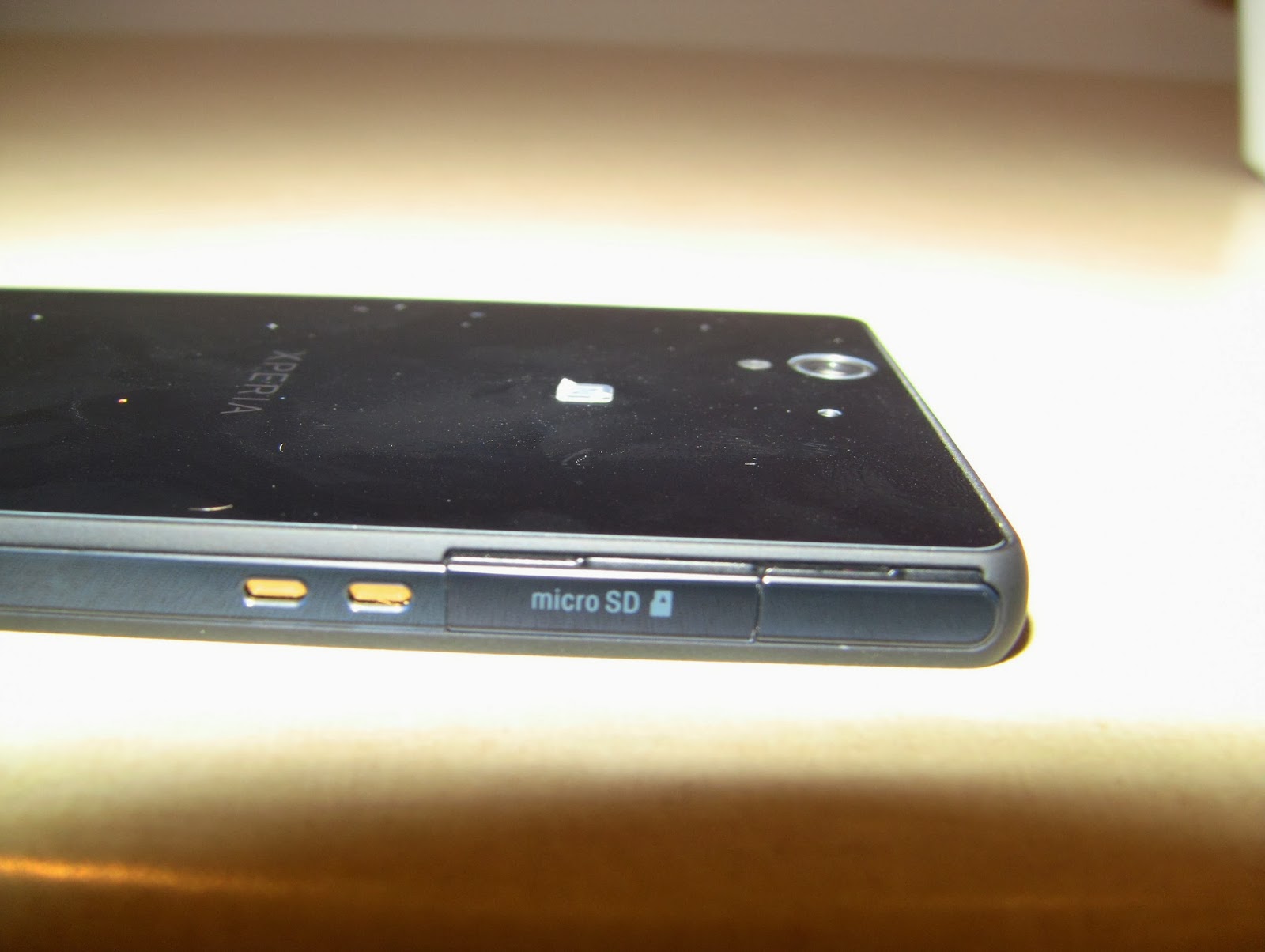 Along the left edge you will find the microSD and SIM card slots under flaps. In order to maintain its water resistance, those ports have to be closed. Not much else is along that edge. 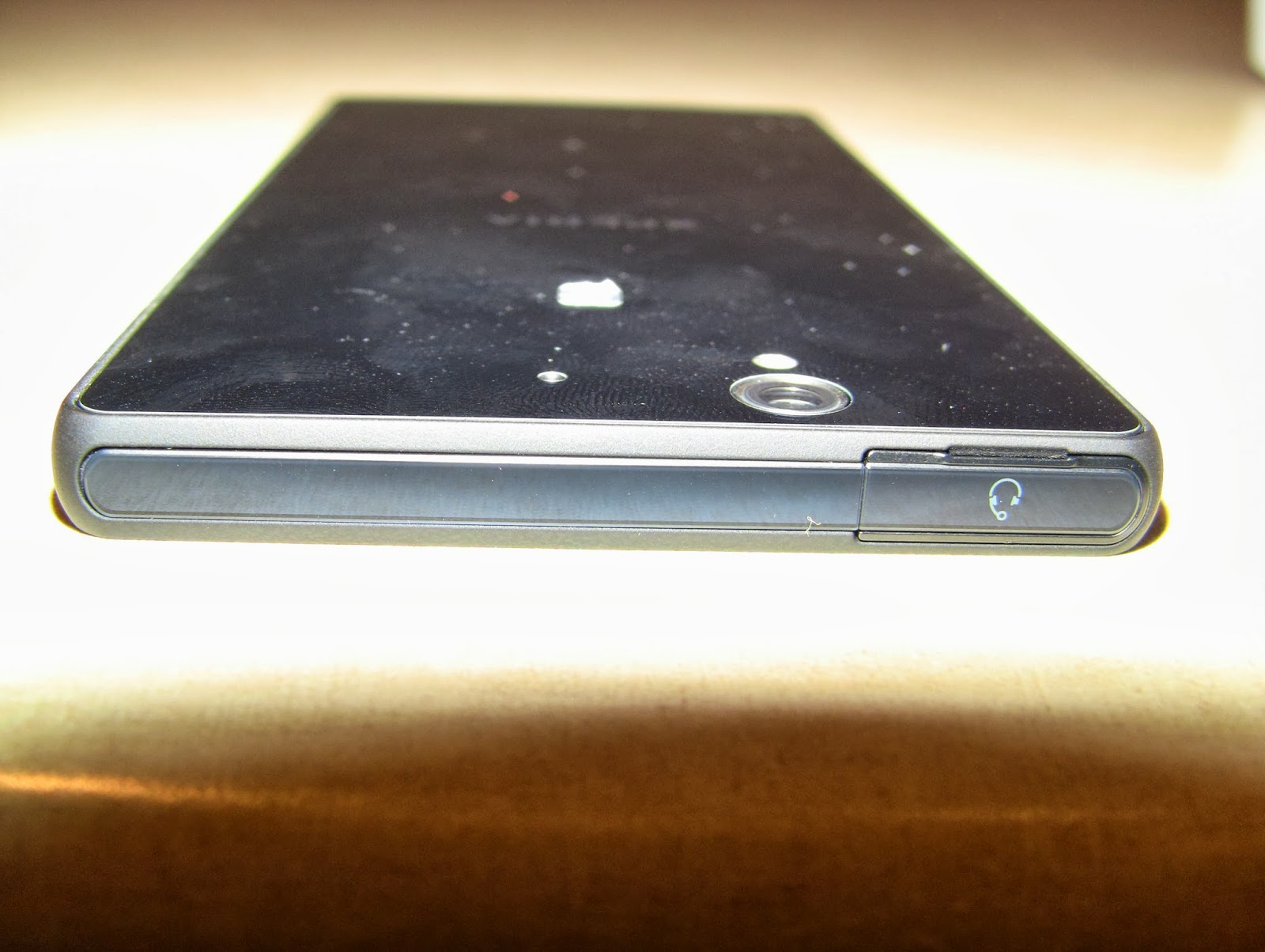 The top edge also has a flap covering the headphone jack. For those of you with your headphones in all the time, this could be problematic, as you would forfeit the waterproofing when in use.

On the front you will find the forward facing camera, mic and speaker for calls, as well as a small notification light at the top. On the back is the 13 megapixel shooter, LED flash and NFC sticker (ugh).

The glass gives is a nice build quality, but is a fingerprint magnet. The ergonomics of the device are not great either. Sony has recessed the glass back behind the lip slightly (most likely to keep the glass from touching the table) but has introduced a new problem. When holding the large phone with one hand, the lip digs into your hand, which is not very comfortable. The Z Ultra and Z1 seem to have addressed this, but we won’t know until we get it in our hands.

The display is nice, but lacking in comparison to Samsung and HTC’s offerings. the viewing angles are quite poor and the display in general seems washed out. Sony seems to be aware of this and has addressed it in their new phones with the Triluminos display, but it is still a problem in the Xperia Z. 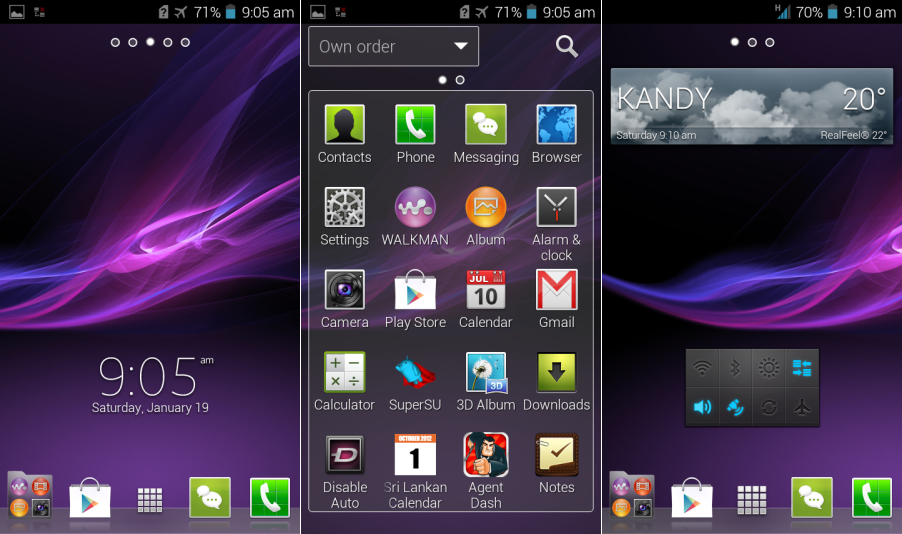 Ryan covered it in his review of the ZL, and I went pretty in depth on my video, so I won’t do too much here. The Xperia Z comes with Android 4.1.2 with Sony’s own skin. The skin is quite minimal with just some aesthetic flare. Sony has made some changes to the app drawer with the ability to list apps in your own order, including folders. They can also sort alphabetically, most used and latest download. 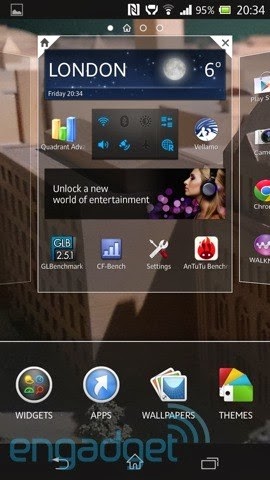 The widgets are gone from the app drawer and are instead accessed via long-pressing the homescreen. This allows you to view all you homescreens while scrolling through the widgets. I much preferred this implementation over the stock Android implementation as it allows you to see everything while searching for the right widget. You can also add additional homescreens. 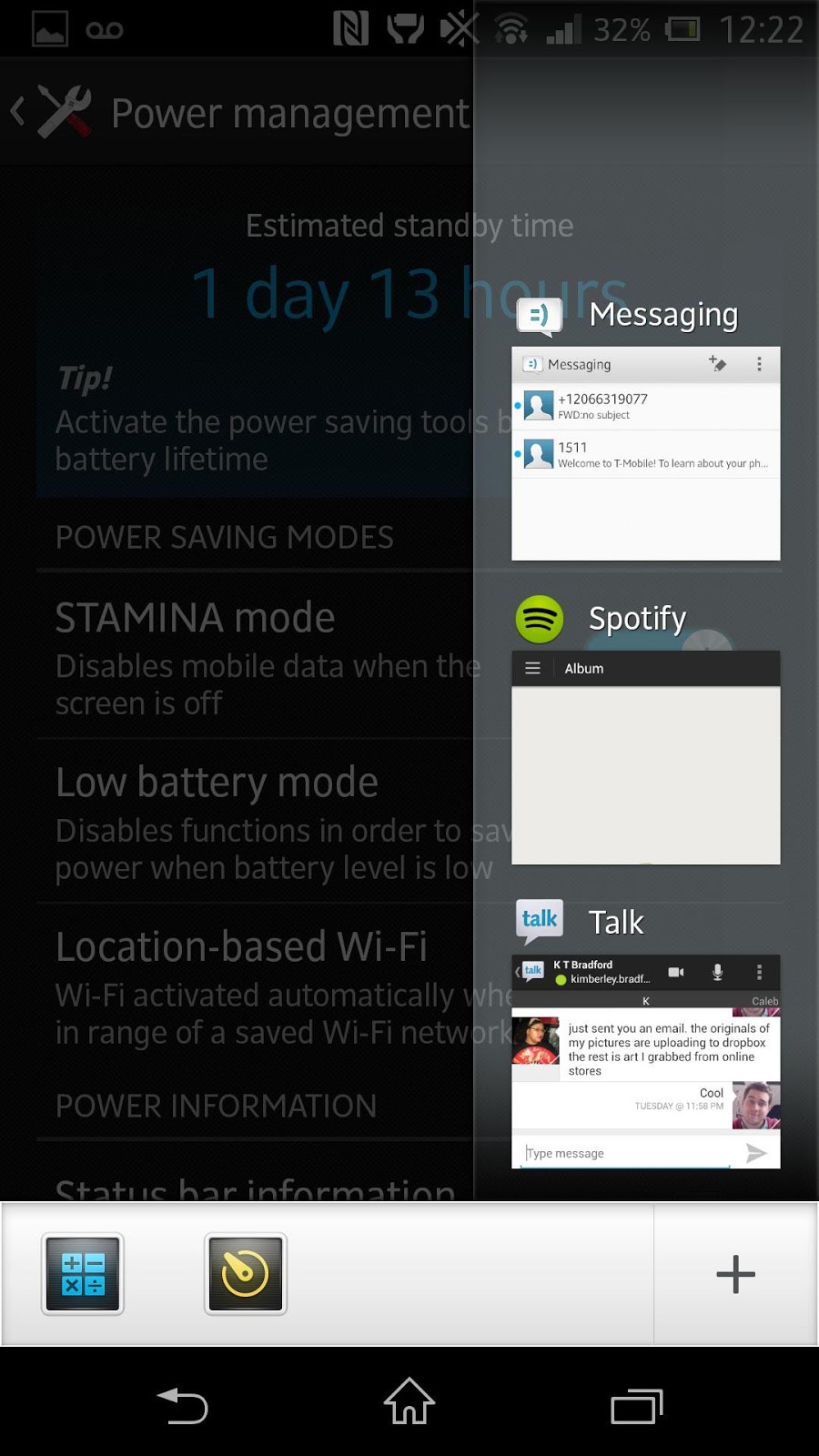 Small apps are something that Sony added a while back. They are accessible from the multitasking menu and will pop up above any running application. Also, you can add a homescreen widget as a small app, which gives you a lot more flexibility. Only one can run at a single time.

The Xperia Z comes with a full assortment of Sony and Bell bloat. Sony has always had a full set of media services and all of those can be found here. Music Unlimited gives you music streaming like Rdio and Spotify, while you can upload your album to their servers like Google Play Music. Best of all, it’s actually available in Canada. Video Unlimited gives you access to movies and TV shows. It’s pretty nice to have this since Google Play still does not have TV shows and music in Canada.

Sony also makes use of the Playmemories app to auto-upload photos to their servers. This is particularly interesting as that will be the app that interfaces with their QX lenses and sensors, so we should see auto-upload with that when they are released.

You can also find Playstation Mobile (PSM) on-board, which works on most Sony and other select manufacturer’s devices. PSM is trying to be the Play Store for Sony, but it is still lacking in content. There is also no saved game, achievement, and multiplayer support, which are given in Google new Play Games service. The only redeeming quality is the ability to play those games on a PS Vita if you have one, which gives you full controller support (Dualshock 3 is also supported on the Xperia Z).

The Xperia Z sports a Snapdragon S4 Pro processor with 2GB or RAM, just like in the Nexus 4. It falls pretty well in line with the Nexus 4, but for a premium phone with a premium price tag, the Xperia Z should really be pushing the envelope, especially with the Z1 on the horizon. That being said, it can handle the OS well enough.

Sony has opted to remove the shutter button and place the tiny speaker there instead. For a company that prides itself on it's listening devices, the speaker is sorely lacking. It is at least good that they didn't put it on the back of the phone (shame on you Google and LG), but still severly undersized it for listening. If you want a good sound experience, there is no question you want the HTC One, but do not buy this found expecting to use it without headphones. 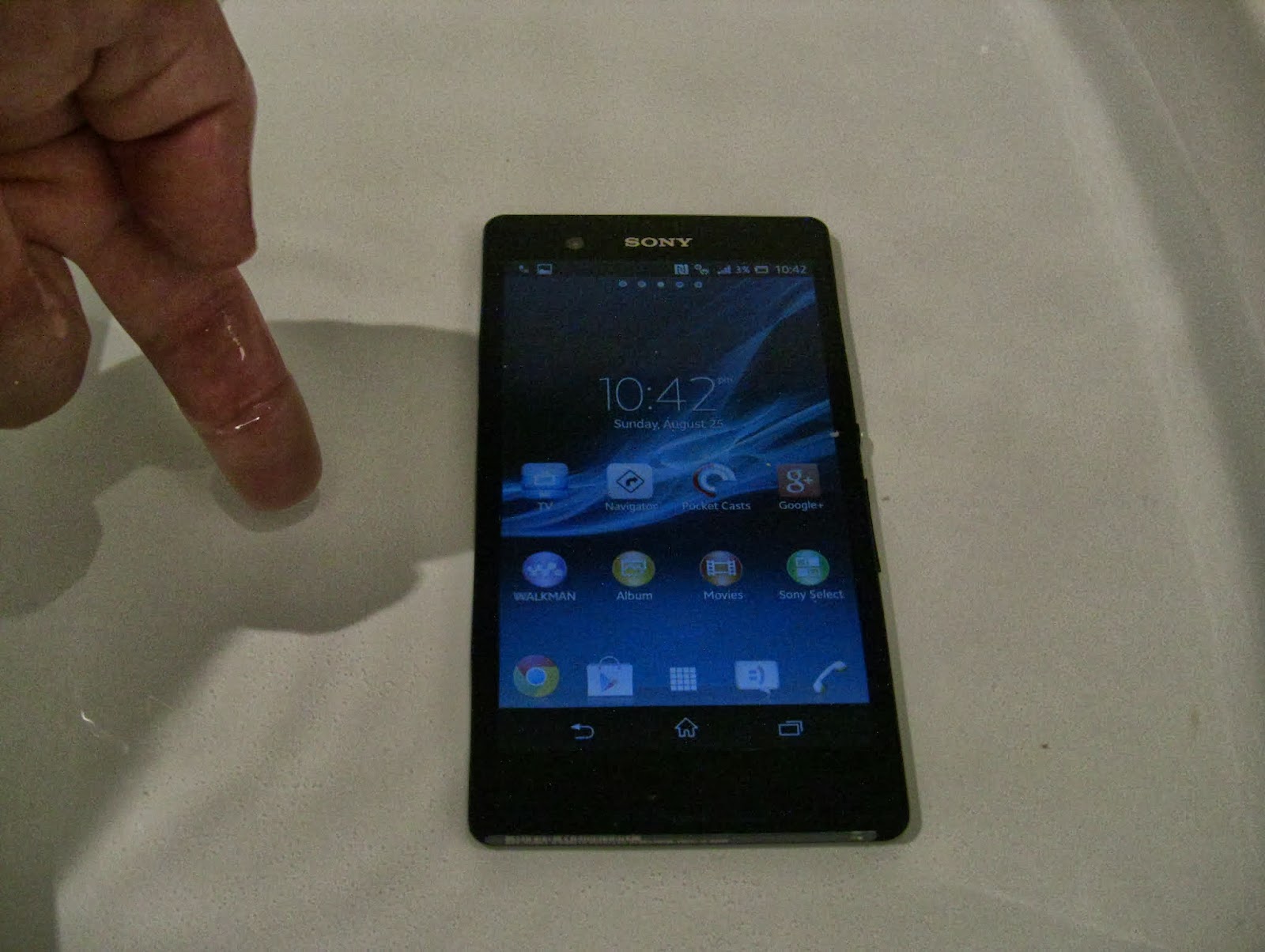 As I said earlier, the Xperia Z comes with IP55/57 certification, which will protect it from low pressure streams, submersion in up to 1m of fresh water for 30 minutes and dust resistance. I got a first hand chance to get her wet, and it doesn’t disappoint. So long as all the ports are closed, the phone continued to work underwater, sans the touchscreen.

It's a
shame they didn't include a shutter button, because then you could at least take pictures while underwater. Luckily, this is still phone you can take out in torrential downpour and you won’t have to worry about shoving it in a vat of rice.

The camera has become an important part of owning a cellphone (who needs point and shoots anymore?), and Sony has not omitted it. They have thrown on a 13 megapixel Exmor RS sensor and 2 megapixel front facing camera, both delightfully mediocre. They are a definite improvement over the Nexus 4, but post-processing still seems to add a lot of noise the to the image. If you are looking for a good camera phone, it’s hard to beat the Nokia 1020 or the Xperia Z1, but don’t expect gallery level photos from this phone.

The Xperia Z is a good device, especially if you are in the Sony camp, but may not really be worth the premium price tag. The advantage is that with the Xperia Z1 on the horizon, it is more than likely you will see a price drop for the Z. At a cheaper price, this phone is a pretty solid buy and will keep you satisfied. If you are a the spec hunter, you would essentially be buying a 6-12 month old phone.

That being said, I enjoyed using it and did not have any issues with slow down or lag. Also, being one of Sony’s flagship phones, they will more than likely keep supporting it for the “long” run. I would definitely recommend it if you are looking for a cheaper phone (after the price cut, of course) that will handle well. At it’s current price, it’s hard to find a reason to go with this phone over the Nexus 4 (unless you really, really want the waterproofing).