[UPDATE - it's now on INDIEGOGO]

+PWNAGE Project has some lofty goals.  The idea of really 'gaming' on an Android device is pretty young, and they're planning to a very big player in that market.  When you look at the device (the Pwnage Li) that they're building on the site looks to accomplish quite that.

In order to set the whole thing in motion they're launching their Kickstarter program tonight at midnight (September 23rd, 2013 @ 12am). 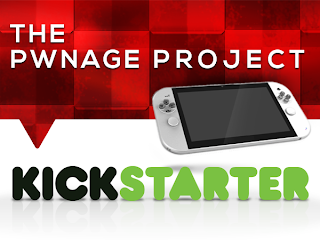 As a sneak peek, here's the offering of the funding program: 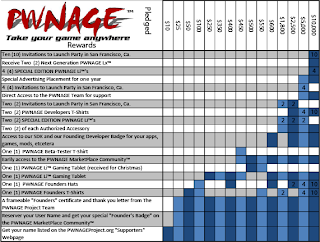 To also help spread the word they've started a contest to offer a free Li device.  One to one of their Facebook fans and another to one of the Google+ fans.

Check out the media release after the jump.

Today marks the kickoff of the highly anticipated Kickstarter campaign for the PWNAGE Li™, the first tablet PC that provides total freedom in a gaming device. “The PWNAGE Li™ is a true three-­‐ in-­‐one device. Not only is it a powerful hand-­‐held and console gaming system, it provides all the functionality of a tablet PC, excels as an Android™ development tool, and is the first gaming tablet fully developed with Open Source solutions to run on true Open Source technology. We plan to raise $1.25 million through Kickstarter and to ship the first PWNAGE Li™ by January of 2014,” said Matt Leandro, founder of the PWNAGE Project™ (www.pwnageproject.org).

The PWNAGE Li™ comes equipped with a muscular version of Android™ 4.2.2 developed by Ray ‘neomode’ Trunk, one of the coding wizards at www.FreakTab.com, the industry leader in custom ROMs.  Sporting a 1.6 GHZ quad-­‐core RockChip RC3188 Processor and 2 Gigs of DDR3 RAM, the PWNAGE Li™ delivers robust performance. With its true 1080p HDMI and wireless HDMI transfer support for amazing visuals, fully integrated 3G wireless capability, and sleek built-­‐in controls, the PWNAGE Li™ brings you a gaming experience that delivers on all counts.

“You have the power to customize your device any way you see fit, and our easy to use PWNAGE ROM Recovery Tool™ gives you the ability to restore you device, no matter what.  All systems come rooted, and you have complete and unrestricted access to modify the software on this device however you wish – without voiding your warranty! We want to make it easy for you to develop your own games, and we’re ready to build a community that brings together the best developers
to revolutionize the gaming industry through a commitment to Open Source technologies,” Leandro said.

This device ships clean, with none of the obnoxious bloatware you would find on other tablets.  This gaming tablet is the first of its kind to give the user a truly optimized gaming experience and the freedom of knowing that you have full control over your own device and the software it contains.

In order to allow as many people as possible to be a part of this revolution in gaming technology, the PWNAGE Project™ is raising funds for the manufacture of the PWNAGE Li™ through Kickstarter. The campaign’s open structure and multiple contribution levels can accommodate everyone from the casual gamer, to supporters of the Free and Open Source Movement, to hard-­‐ core hackers who want to be part of the beta testing process and be among the first to get their hands on this amazing device. We are also currently running a promotion at www.facebook.com/pwnageproject Anyone who “likes” our Facebook page will be entered into a drawing for a free PWNAGE Li™, which will be shipped during our pre-­‐release.  All it takes is one “like,” and you can be one of the first people in the world to get a PWNAGE Li™. To learn more about this exciting project, be sure to visit www.pwnageproject.org, and become a backer at www.kickstarter.com/XXX (link will be available after midnight - otherwise look at: https://www.kickstarter.com/profile/pwnage)

The PWNAGE Project™ is dedicated to delivering you true freedom in an Android gaming tablet.  The PWNAGE Li™: Take Your Game Anywhere…