So, Tom bought one and loved it.  He since has gone back to his HTC One, but he really gave it full props, and just about anybody I've read who've played with it have done the same 'about face' with the device.  It truly is pretty cool!

Needless to say I was excited to get my hands on one and try it out.  It's been about a week now and it was time to put my thoughts down.  Let's see what I thought of it.

Nothing life shattering.  Compare it the Nexus 4 and you'd think the Nexus 4 should beat it hands down.  But it doesn't.  The Moto X is just exactly what it needs to be.  No more, no less.  And the crap about only a dual core.  It's got 8 cores really:  quad core Adreno for graphics, a dual core Krait and then 1 core for language and another for 'contextual'.  It's those last 2 cores that allow it to always be 'aware' and ready for a command.

Physically Speaking
Very very little bezel, this phone feels like it's all screen.  It fits very well in the hand.
The back is made of a rubberized that looks like carbon fibre, or kevlar, but it's not.  It's some composite.  But it feels nice.

Speaking of the back it's curved, but instead of being 'entirely' curved, it's curved to near the middle and then it's some what flat.  That little bit allows it to not continually just rock back and forth on a table, but to 'set'.  Smart.

Also on the back is a crazy loud speaker.  It really blows the speaker away from the Nexus 4.  It reminded me of the power of the HTC One speakers, not as good, but near to it, and it's only just one speaker on the back.

The option to side the power and volume buttons together isn't my favourite, but you can't have everything.  It just means taking screenshots is that little bit harder.

Turning the device on you're met with a 720p display.  And it's gorgeous.  The AMOLED really 'shines'.  In a video below I show off my N4 with the MX watching a video and hopefully you can tell the difference.  The IPS on the N4 looks bland in comparison.  Another neat feature of the MX is that the navigation buttons (home, back, multi) are translucent backgrounded.  On the Nexus they're a solid black.  Minor thing, but really shows off how much screen this device has.  With very little bezel to the device you really do feel like you're holding JUST the screen.

At 4.7" it's the same size as the Nexus, but it feels much smaller in the hand, and for some reason some of the text/images seem 'bigger'.  Maybe it's just my eyes, but I did notice on some games the writing would go to a second line whereas on the N4 it wouldn't.  Who knew 48pixels made that much of a difference.

Moto Features
The big selling points of this device are similar to Samsung in its exclusive features.  And there's quite a few; like Samsung there's some you'll never use, and others you'll use on a daily basis.

Out of the box you'll probably want to look at the Migrate feature.  Essentially it's an app that's pre installed.  Download Migrate from the Play Store on your other device and it'll upload all the info you want to carry over.

We talked about 'backing up' your info on your phone during Friday Night Hangout #46, so you can watch that tip too, if you like.  Personally I don't care to back up.  Any 'important' information I'd have from another phone I'd transfer, or already have synced with Google.

Moto Assist has some features to recognize what types of 'scenarios' you'd be in.  Whether driving, or sleeping, etc.. and sets up rules in which to behave during those scenarios. (Interesting departure from SmartActions that previous devices used). 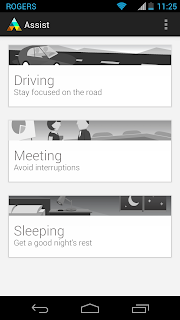 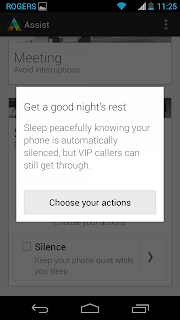 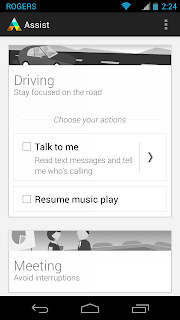 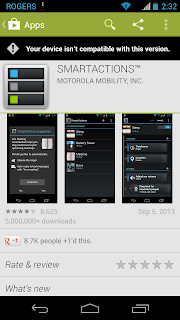 There's even a Moto Care app, that'll have tips and tricks for your device.  It even will get you to call their tech support! 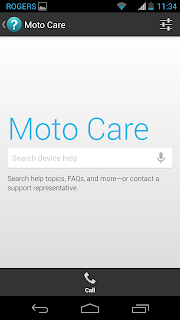 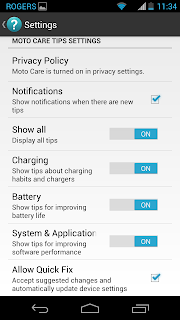 Active Notification is something that a lot of people love, and at first you'll think it's silly.  But really, it's awesome.  Essentially you'll pick up a 'napping' phone, and it senses the movement showing you a pure black screen with the time and unlock button to either unlock the phone or slide in another way to see your notifications/messages.  Big whoop you'll say, I can do that on my device currently.  However, on your other device you'll have to hit the power button... or you'll have to hit the power button then slide the notification shade.  This ... just pick it up.  I love that feature because I almost always pick up my phone to check the time, so without having to push a button it knows it's picked up and shows the time.  Brilliant.

(note, it's really hard to take a screen shot of that... so here's a stock photo of it working)


Desktop Notifications I didn't get to play with all that much, but the idea here is that there's a Chrome extension you can get, Motorola Connect, this allows you to sync your messages, call history etc.. .for desktop notifications on your computer.  Not for me, as if I need to, I'll use AirDroid, but this is nice in the fact that I wouldn't have to download it.

You can instantly jump into the camera with the "Camera Gesture".  It's neat, it's novel, but any time I tried to do it to show off to people, it never worked.  By myself it'd be about 2/3 times it'd work.  It really is neat, that a 'napping phone' will wake up (the vibrating motor slowly revs up to let you know it's starting) and instantly you can start taking pictures.

There's even a Motorola Device ID option in the settings.  Which ties to your Google account and allows you options to the 'lost phone web portal'.  How this is different from the Android Device Manager, unsure.  But it's an option that's front and centre, for those not-in-the-know users.


And I can't not talk about the "Ok Google Now".  Sure, we have Google Now on any 4.1+ device.  I have an entire database of commands that it can do.  So that's not new.  But being able to say the phrase whenever (even when it's off) is pretty neat.  What's even better is that it's trained only to your voice.

Usage
Okay, it works!!  This phone, for all the condemnation it gets for not so impressive specs, just works fine.  For those of you who believe in benchmarks:
Benchmarks 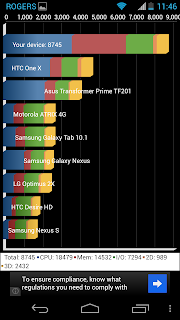 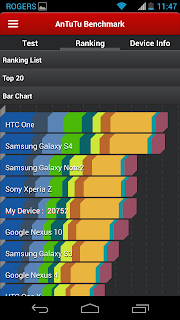 Nothing 'fantastic', but it really doesn't need to be.  I have yet to notice ANY lag or stuttering on this device.

I've actually been using it to mainly play Dungeon Hunger 4, and it's never slowed while playing.

For that great 'usability' the battery life is about on par with my Nexus 4.  On typical usage it was getting about 10% drop per hour.  (The battery size on the Nexus 4 is just slightly less than the MX as it's 2100mAh and the MX is 2200MmAh).  When I would go out on 'outings' and take both, I'd have my N4 do some of the same tasks, but primarily used the MX.  My N4 has a lot of applications running push notifications (2 Gmail accounts, 2 hotmail, 1 exchange, 2 twitter, etc...), but I'd have the screen on the MX more.  Either way I tried to dice it, the drain was about the same.

Camera
The only area I have to give this phone a failing mark.  The photos are 'ok', but where everything else on this device shines, it was quite the disappointment.  I did some comparison photos with my Nexus 4 and the Moto X and every time the N4 outshone (at least in my opinion).

Colours were very muted and as Tom was discussing, the SN ratio was nil, meaning in dark or far away objects detail was lost. 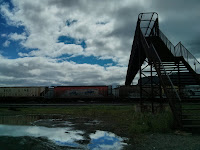 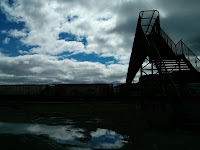 Nexus 4 with and without HDR

Moto X with and without HDR

Many of the pictures looked like there was a film on the camera lens, so I'd often check that.  Now, according to Tom, he sent a message to Punit Soni, who acknowledged this fact and that it's merely a software fix away.  Let's hope so.

The interface is pretty nice, with 'pie' like controls you slide out from the edge and 'dial in' what you like.  Personally, I didn't like the HDR to have an 'auto' feature, but that's just me. 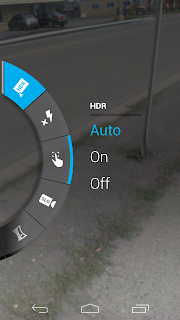 Overall
It's a buy, it really is.  Although, the camera is a bit hard to swallow.  And it is unfortunate that we don't get the opportunity to purchase one through the Moto Maker (although in a message from Punit Soni, he did say it would roll out eventually to all markets).

The device fits pretty well into anybody's hands, and works very well.  Controls are smooth and intuitive and I've never had an issue with this device yet.  It reacts well to gaming, to web browsing.

You'll also get a bonus 50GB of Drive space for 2 years when you activate your phone.  That's about $60 in value right there.

Pricing
Currently sitting at $169 on a 2 year plan with exclusivity Rogers.  $549 on a month to month plan.

Rating
I know I should give this phone a rating, but it's going to be tough, because it'll be a rating for right now, and comparitive only to the phones I've used... but ...