If you don't know it, read on.
So, a while ago I was having some issue with my battery.  I think it was more an issue with apps - but it was just draining way too fast.  I liked knowing how long my battery would last, or how long it would take for my battery to charge up to full (it seemed like it was perpetually at about 40% and take forever to charge when i wanted to go somewhere).

I even bought a power pack to supplement on the go (a review of it later on).

Problem was, there wasn't really anything I could find for lock screens.  This was recommended to me by +Randy Kelly Jr.

So I gave it a try, but I was a little put off by the battery widget.  It was pretty plain... 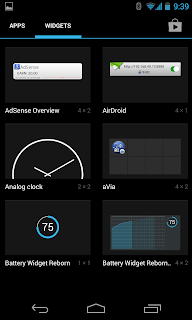 Essentially a 1x1 of just the battery% or a graph (and on the lockscreen, which I wanted, it was only the circle).

But what about the graph, so I dug a little deeper.  I love graphs and stats.  Turns out that you can have the 'widget' also in your notification bar (I just have hiding the icon for it... I don't like clutter).

So, in the pull down shade I can have an expandable notification for my battery.  If it's charging, it'll tell me how much longer until it's fully charged, and if it's discharging, how much longer I'd have of a battery 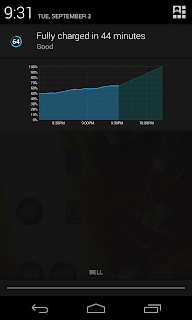 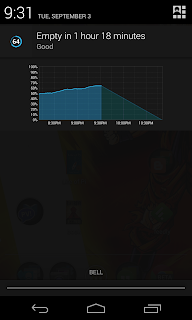 Now those are just 'estimates', keep in mind.  The longer it has data, the better it gets at guessing.  What I'd like for it tho' is to recognize the difference between wireless charging and a USB charger, so it would know the approximate charging rates.  Same with discharging it sort of guesses based on instantaneous discharge rates (not really a 'rolling average').  It's really funny when I'll be charging so it gets the 'charging speed' and then turn off charging (unplug) and uses that same 'speed' for discharging.

The settings in the app allow you to change (see photos in order below) what the widget can show with power controls in the notification (I didn't enable this feature), the battery history (the charts) and the simple widget in the notification.

In the last panel you set up what will show in the notification tray, either the battery info, or the battery history.  When it's a simple widget (not expanded) you can set up what shows... remaining time, or % or voltage, but you just get 2. 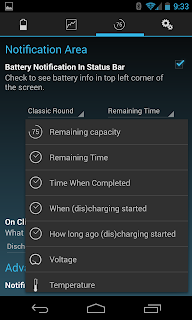 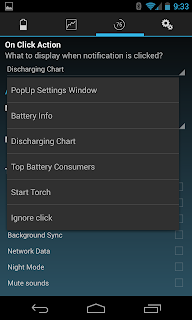 Then there's the advanced options to play around with and make it your own.

I'm really enjoying it.  What I don't like about it is that it isn't really 'learning'.  It needs to be off battery for a while before it starts to come close to proper estimation.  But a guess is better than being in the dark.

Now, this is the BETA version of the Battery Widget Reborn.  It's a paid version.   Now th ebeta usually has features that the Pro doesn't, but it's not guaranteed to always work (since I've tried it it 'expired' on August 31st, and then September 1st it updated to work again).  I'm giving it another week, and will probably buy the $2.50 version.