Your thoughts on the Nexus User Experience devices [poll results] 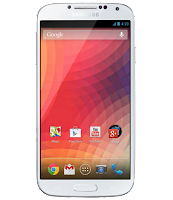 So everybody has been screaming for the 'next Nexus'... and at Google IO +Hugo Barra showed us something a little different.  A flagship Galaxy S4, but with stock Android, and would receive timely updates just like the Nexus devices.

Then there was the HTC One version.  All old news at this point, but even though they're not out yet (and no word even of Canadian availability) I wanted to get your take on them thus far.

Here's what you said.
As to the general category you answered: 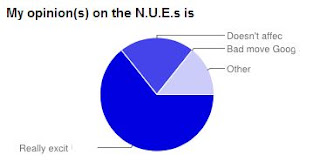 What?  Nobody said "Bad Move"?  Shocker.  The 'others' were folks that said curious, or were waiting for more information about compatibility... or, I like this one, CM ALL THE THINGS!!

When asked if you would buy a NUE: 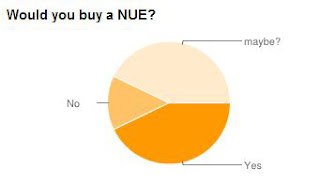 So hardly anybody would NOT buy the device.  Again... options

And, when I asked you about if it should be a continuing program, you said:

The chart is a little small... let's see it by the numbers

Again, options, any device is always better with options.

Imagine getting stuck with garish looking icons... with no way to change them?  Even if your phone ISN'T a nexus device you have options to play around with.

As a last thought, I asked you also to elaborate on some of the opinions and here's just some:

Android should be an open platform in every way.  And I do vote with my wallet.  Bell did not get my contract because their phones could not be rooted (at the time)

Good because we can have the stock Google experience should we want it.  Bad because you'll be forced to give up amazing software these companies offer in exchange for Google's often limited design.  Camera being the prime example

Google needs to mandate a vanilla android experience for every android device out there as the base with the manufacturer UI on top as a skin, so the user doesn't have to bay exorbitant amounts for a stock google experience.

I have a nexus 4. It's a lot cheaper than these google editions and does what I need from a phone. If the NUE devices didn't have hardware buttons, i might consider it.

I have been asking for this for YEARS!  Especially on HTC devices.

I think they have settled on 'Google Edition' to separate it from the 'Nexus' brand.

I won't buy this overpriced garbage,  Nexus4 all the way if I'm buying

It gives consumers the choice to experience the way the OEM intended the phone with the stock software or experience Android the way Google intended it. After all the true definition of Android is choice!

It's a fun thing they have done, a cool idea. But i really hope that they also will unviel a new and awesome Nexus 5. One that they have designed alone, like the Chromebook Pixel. It would be great for the competition and help Google differentiate from the others with there hardware.

Its great that Google stock phones are out, however still going to stick with Nexus for price/features. Would be nice if Samsung and HTC released some of the custom software for there Googleized phones. Then they would have some great 'optional' value added.

The first step I take upon getting any android phone is to try out the available roms. That means wiping the currently installed one. Once wiped it doesn't really matter if it is a NUE device or not. The hardware remains the same, and I choose the software. I only see the benefit to those who can't root/flash.

The NUE isn't a draw for me as I tend to use xda forums to customize the phones I own with developer ROMs.  Updates arrive  quicker that way and it's more cutting edge