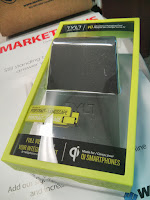 One of the cool things that we heard about when we saw the Optimus G and the Nexus 4 was that it would have built in wireless charging capabilities.

We've seen the Nexus Puck (i.e. a reborn Palm TouchStone) come out, and to some mixed reviews - Tom gave his a while back - but other than a few charging pads out there, the options have been pretty limited.

I saw the +TYLT Vu charger at the CES show and I liked the style.  Much like the docks you see that give you an angle, but with the charging.  Not many wireless charging options give you the angle.  Plus, I liked the Band Charger I reviewed a while back.

So, what's to say about this cool looking charger?

First off, obviously your device will have to have Qi wireless charging capabilities.  For built in Android devices, that's like the Nexus 4, the Optimus G... and well, maybe if you buy special back for several others. (if you're in the US, your Droid DNA would work too)

What's nice about this model is that it generally has almost 'any position' style charging.  You could put it sideways, upside down, etc... and it still charges.

The 45 degree angle lets you use daydream or other slideshow options for your phone while it's charging, so you can still see it.  The lip on the bottom allows your phone to stay put and not slide like others. 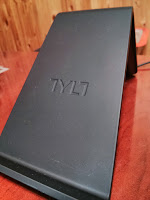 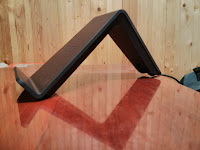 Also, there's a little LED on the bottom that you can 'just see', green means charging and red means error.  Which is handy.  As this charges when the screen is off, you want to know if it's still charging.

I've had a couple times where the device wasn't charging after a while... don't know why, but it's happened.  Not a lot.

Charging my Nexus 4 is relatively quick.  I assumed wireless would be 'inefficient', but about an hour on the stand and it was about 50% charge (that was with screen off... with screen on and daydream or whatnot, your mileage may vary).  And it was warm... not super warm, but noticeably warm. 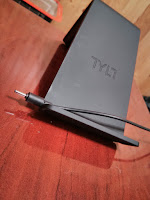 The only thing I can say 'bad' about it is that I wish it used microUSB for the power... as I have tons of those kicking around already.  Instead it uses a plug... which I guess makes sense.  Having its own adapter allows it to provide more power to the unit than if it were just plugged into a USB port.  All that extra juice to the unit allows it to power the multiple coils that are in there (which in turn allows you to charge in just about any position).

The 3 Coil Free Positioning System requires 12 volts, and USB only provides 5 Volts.  We even have sensors that detect which coil has the best connection and it shuts down the other coils that are not in use.  We would LOVE to use USB, but hopefully the technology will advance and let us in the future.


This is a DEFINITE BUY.

Now, where can you buy it?  Well, the website:  www.tylt.com doesn't really give you much pointers, but you could back it via their kickstarter - but they should be out soon for retail of $70.  Which isn't too bad, considering that some normal wired docks are that much, and this is really a quality device.