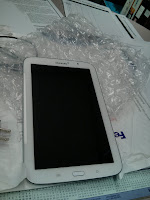 So, it's no secret, I love tablets with a stylus.  It's a throw back to my old Palm days as I've used those models for over a decade.  Any time I get to use one with my device, I do.

When the Note 2 came out I swore up and down that I was buying it.  Didn't in the end, not that I regretted it, but part of me really wanted that stylus.

I've also been feeling the loss of my tablet.  My ol' TF101 is sitting collecting dust as it's getting quite on in 'tech years' and I'm finding the 10" size too large.  I had the Nexus 7 and it was a near perfect fit.  I just had some issues with the screen.

Thus enters the Galaxy Note 8.  A mid-sized tablet with a stylus.  Awesome.  Retails for around the $429 mark at Future Shop and BestBuy.  Let's get into the review, shall we?
First off, let me just say that this will seem short by most comparisons to my other reviews, this is because essentially I'm reviewing a larger Note 2 (there are some differences I'll cover, but more on that later).  So lots of what is seen in this device, I've already covered in the Note 2 review.

For a look over some of those details - and all about TouchWiz, you can read the old review on my previous site or watch the video here. 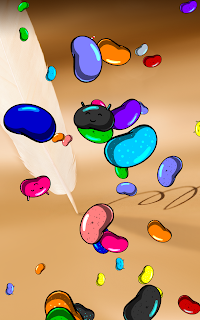 Nothing 'fantastic' or sets it apart from the crowd.  Really, it's pretty much the Note 2 in every respect minus the camera (but who cares about a rear camera on a tablet?).

On the Outside
The design is nice with a great bezel.  It doesn't feel too big, and the lip around the front helps you 'feel the edge', if that makes any sense. 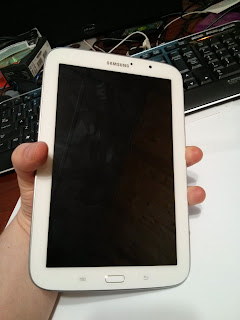 Having the speakers on the bottom tends to mean that you're going to cover them with your hands when you put it in landscape mode (at least one for sure, depending on the game you play).

The size is perfect.  It's a little large enough that you want to carry it carefully.  Get a case.  As I've carried it to a few meetings there's been a few times that the thin-ness of it makes me get a little scared that I might drop it.  You almost always are holding it with your thumb on the front screen and palming the corner... can be a little dicy, but I find it just that much bigger that I can use it in one hand really spreading my hand to grasp it, but there's no way I'd walk around carrying it like that.

The back moulding is plastic... and well it does feel kinda cheap in that respect.  Obviously you have to cut some corners to make it $430, but the model I got had some 'defects' similar to the Note 2 I received.

The back plate had 2 spots where it 'bulged', like it tried to snap into place but didn't take... and in one of them you could see the plastic has started to form a crack. 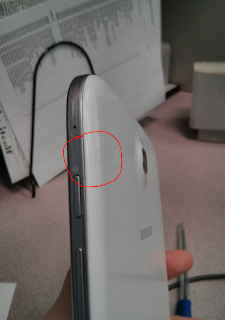 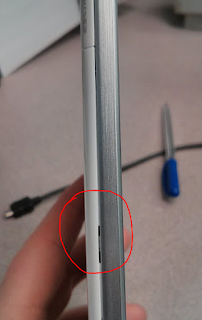 I find myself using the device in landscape mode a lot, and that's perfect while using the IR port for the TV app (more on that later).

On the Inside
TouchWiz ... check the Note 2 review for all the features.  There isn't a lot here that's different from the Note 2.

One app I did note as 'different' was aNote HD.  Sort of like a 'full featured' Agenda app.

Overall, TouchWiz really bogs down this device.  I found it to be quite sluggish.  Get it into a non-Samsung app and it's quite good.  But, leave it be and it's slow.  Not unusable, just noticeably slow. 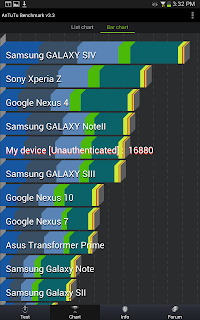 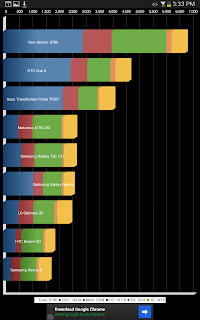 Using the S-Pen is so intuitive.  It's like I never left Palm.  Writing 'graffiti' for text input is good enough for day to day usage (it's a little hard to use the keyboard in portrait mode, especially one handed).  A great feature that they make use of for the S-Pen is to turn of 'touch' input while you're using the S-Pen.  This means that I can write with my palm/wrist resting on the tablet... saves it from registering as an input and ruining my notes. 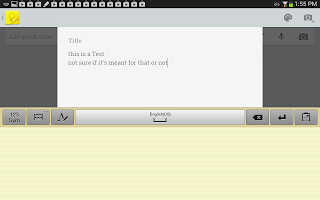 And, the BEST thing about this device, versus the Note 2, is that the S-Pen works on the soft keys (back/menu).  Something I ranted on both the Note 1 and 2 about, but they've got it working now for the keys!  Brilliant!

Camera
The loss of the flash is no biggie, because this is a tablet.  I care more about the front facing cam; the fact it HAS a rear facing camera is hardly noticed by me at all.

This should be marketed heavily by Samsung when they promote this device... I've tried the HTC One and the Sony Xperia ZL who both have IR ports and a TV app... they can't hold a candle to Peel.  It works just as you'd expect.  Plunk in your area and carrier and it tells you what's on what channels.

Best of all it works for multiple setups (i.e. I can set it up for downstairs, upstairs, bedroom, etc...).  I don't remember the other brands having that feature.  I hate to sound all iPhone-y here, but... "it just works".

Hands down THE greatest feature of the device - and probably worth it to buy just for that app.

Overall
It's good.  It really is a buy!  I'd like to say wait for a sale, as $430 can be a bit of a pinch for what you're getting, but it really does make the perfect travel companion and even office meeting companion with how it works.

Sure, there are some out there that don't like Samsung's TouchWiz.  I'm one of them.  My daily driver has to be fast, responsive and nothing cluttering it up.  But this is a device that's not your daily driver.  It's your 'relaxation' device.  There's no "need for speed".  Movies load and play fluidly.  The web comes up as fast as any other.

Battery life has not been as stellar as I would have liked.  At 4600mAh, the battery should blow my Nexus 4 out of the water, but it hasn't.  I'm not 'complaining', just I expected more.

Trust me, take it out for a spin, and you'll like it too.
Galaxy Note 8 Review samsung