Photoshperes - sharing with the world

Posted by Ryan Moore on April 08, 2013
So the other day during our Friday Night Hangout +Tom Gray made the comment that there really wasn't a huge difference between 4.1 and 4.2.

And he's mostly right, there really isn't a big speed improvement, maybe some bug fixes, but the only real difference is some extra features like Photospheres, settings pull down shade, etc...

Let's go back to photospheres.  It didn't really get it's day in the sun as the launch event for 4.2 and the Nexus 4 was cancelled due to bad weather (Hurricane Sandy) - so it didn't really get a LAUNCH and a proper introduction to the Android world.

Sure, us enthusiasts had heard about it, or had played with it, but that was about it.

They're cool, but what can we really do with them, aside from going 'oooh'.  Well, SphereShare.net is a pretty cool new service to have a 'social online album' for just spheres.
For those who aren't quite sure what Photo Sphere is...

Cute, and it is novel.  But, unless the person you're sending the sphere to also has 4.2+ it's just a stitched photo without the 'oooh'.  According to Android.com you can use them not only for sending to friends, but upload them to maps.  That's cool. But let's go deeper. Thus enters "SphereShare.net", an online album and gallery. 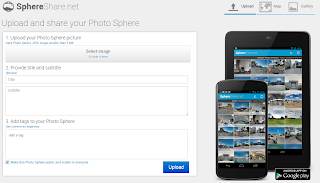 But it doesn't make much sense to do all that from the web, when we take spheres from our phones, so there's also an app! Check out other public spheres!

Now, when you upload it has the option to say "public" or not, my guess is this is to have the public galleries, as well as have your own private album of just spheres.  I gotta say, that'd be kind of handy as you don't know how often I've taken one and then tried to show them to someone else and it's just hard to scroll through all my photos looking for that one icon on it.  But I can't figure out how to see the ones I've uploaded that aren't public.  hrmm... 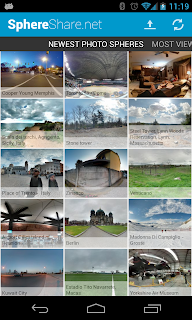 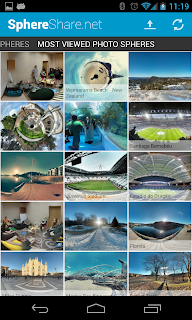 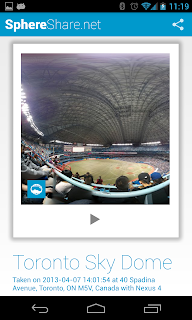