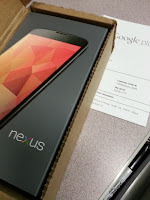 This has been a long time coming, as it's almost been a solid month since I've had the phone.

Here at Android Coliseum, we're committed to providing info to our Canadian readers about all available phones (check our database for the complete list) - and although stock is pretty tight on the Nexus 4, don't worry, we'll alert you when they're available again, we want you to make an informed decision on what to purchase.

It's been a great phone.  Ever since I tried out the Optimus G, I was expecting great things out of the N4.  It was so weird not having a real launch for the device or full keynote speech on the new features, however it still was quite the ordeal to get a device.

I was just happy to be able to turn over the S3 I had been using and get back on to a true Google experience again.
Some of you may be asking:  what is a Nexus?  It's something I've had asked of me a few times from a few recent Android converts, about why I went to this one.  Especially my dad, who thought he had bought THE latest and greatest, so nothing should be newer/better than his Note 2.  Well, I could get into a whole diatribe about it being the 'flagship' of the Google brand, but there's some discussion to be had on that front below.  The simplest answer is that it's running 'pure Android', no changes, no customizations, just as nature... err God... err Google intended.  It'll get the updates as soon as Google wants it to, and not have to wait for carriers and OEMs to decide/delay.

Android Authority has a really good write up on what it is.  Check it out if you like a full length discussion.

Specifications
up until I got the phone I was using the Galaxy S3, so just to give you a comparison of the device, I'll pit it against that phone... they're close enough.

So you can see it's quite a close race between these 2 devices. 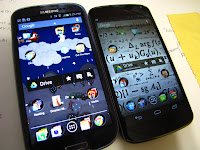 Design
It's pretty sexy... it's a little sleeker than the more 'squareish' Optimus G, which somehow I preferred, but it's still nice.  It feels very iPhone'esque as it has both glass on back and front.  In pretty short amount of time I had some light faint scratches on the back plate so I went to get a case to protect that (had to get a clear one to be able to show off the 'glitter'). 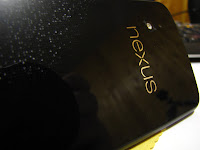 Also, having a case helped to curb the "slippery-ness" of the phone.  This thing was so smooth and so flat that even a teeny tiny incline of a desk or counter would cause it to slowly slide (luckily it never fell).

The screen, although is a 4.7" feels a fair bit smaller than the S3 as within that .1" smaller size you also lose screen real estate for the software buttons, whereas the S3 has soft touch buttons on the bezel.  This also make the phone look like it has a bigger chin - which I'm okay with as it gives my thumb somewhere to hold on to and not push buttons.  But it does feel like an optical illusion that it's smaller.

It would be really nice if Android ever adopted the 'expanded' mode like in AOKP / CM where the buttons can disappear (see Tom's article).

The screen is a little 'fainter' than my S3, I guess the difference between a SUPER AMOLED HD versus an IPS (RGB).  It's still better looking than the pentile nature of the Galaxy Nexus tho'  However, I do notice the scan lines periodically. Especially when I turn it on and swipe a screen, the motion really reveals it.  Not a deal breaker, but just something I've noticed.

Software
This is the reason you buy a Nexus, it's got the latest version of Android on it.  Currently 4.2.1.  Which means all the goodies like NFC Beam, Photospheres, lockscreen widgets, fancier pull down settings, etc...  The other thing that makes the Nexus software attractive is that it isn't customized.  There's no Bell or Rogers software on it, just what Google (and you) put on it.  Also, you'll get updates as soon as they're available - and since we bought it through the Play Store, it's not a bastardized version like we saw on the Nexus S and the Galaxy Nexus (for example the Google build of the Galaxy Nexus was YAKJU, whereas Canada received a build of YAKJUUX - so when Google let out an update, only the YAKJU got it; the models we had would still have to go through the channels of Google -> Samsung -> Carrier -> you... sometimes taking up to a few months for it to trickle out). 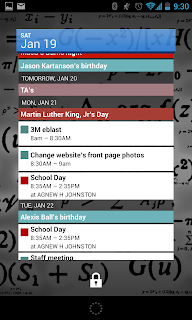 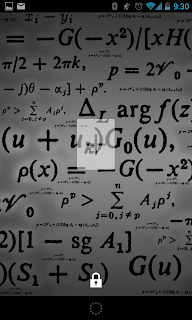 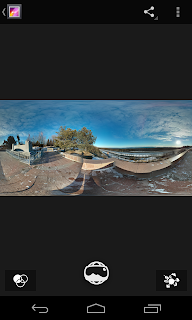 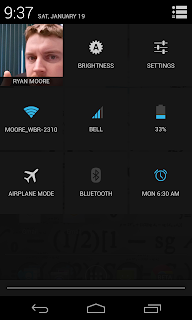 Camera
It's a great camera for what I use it for, but it's not going to replace an SLR or my SX10IS from Canon.  The front camera even though it is a 2MP still looks quite 'pixelated', to almost unusability, but it does have HDR, so points in that column.

Colour reproduction has been quite close to what the S3 has done for me, which means it's a drastic improvement over the Galaxy Nexus device.

The settings feature is also great improved.  A lot of people don't like the 'pop up menu' for the camera options, but I love it.  Super easy, simple to understand.

As I stated above the touch to focus isn't perfect as I do find it can sometimes no a terrible job of actually finding what you want to focus on.  Especially if it's in the distance.  Letting it try to figure out on its own is equally frustrating.

The biggest advantage is that it comes with the stock 4.1+ style of swiping from the camera straight into the gallery (and quick view mode so you can dismiss/delete photos quickly is really great).  There's no way you could ever go to any other style of camera UI after using stock.

Of course we have the photo spheres and 'tiny planet' options.  Sphere's works fluidly, however I find you really need to have some wide open space, else the overlapping is overly obvious (to counteract it, I end up doing the upper and top rows of the sphere, then the lower and bottom row, finishing by doing the middle (as  it seems to do the last taken photos as the ones on top).  Tiny planet option is achieved by looking at a composited sphere's shot (i.e. not panning around in it) and then you'll see the icon in the lower right.  From there you can choose how much of the skyline to remove and then save it as a separate shot.

Something for the photogs to natter about how poorly they're done, but for the budding enthusiasts it's such a novel treat.  Check out some of the samples below.


Overall
Okay, so here's where I try to combine this whole big review into my final thoughts (and you can watch the video review below too).

Overall the Nexus 4 is underwhelming in terms of performance.  It's not a power house, it doesn't pack quite the whollop I expected, and missing out on LTE makes it especially feel like it's not finding its mark.  If you're coming from a Galaxy Nexus or other year or older devices you will be wowed.  But if you'd played on a newer device like the Optimus G, SGS3, Note 2, RAZR HD, etc... you'll find it's middling of the pack.

The battery is great, I have noticed it's better than my SGS3, maybe IPS consumes less than an AMOLED. But it does warm up pretty quickly when being used.  Nothing 'HOT', but enough for me to wonder about the glass backing and the -20C weather I'm using it in.  Charging it via USB is pretty slow.  When I'm using Ingress in the car and I have it plugged in I find it doesn't charge really at all (running Ingress really eats the battery). 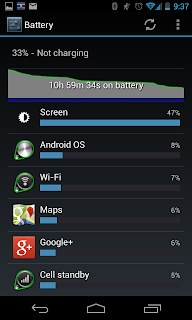 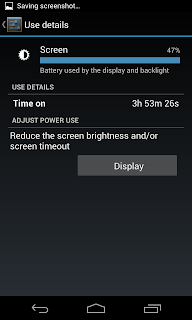 Typically I'm getting about 10% per hour on my battery.  Above is my screenshot of a little better day.  Almost 4 hours of screen time and 11 hours since last charge and it still had 33%.  Wow.

I've also found that given time and the right circumstances this device has crashed or lagged significantly (nothing frustratingly level,  mind you, but still).  Some of you may argue that point, and you may have it, but I like to really use and push my devices - and I load it down.  That being said, I've compared my benchmarks to those who have been rather 'sparse' with theirs and we're about the same.

But the point about the Nexus device is that you're not buying this device to knock your socks off in specs.  You're buying into a true Android experience.  I know some of you like your UI from HTC or Samsung... I don't.  I would much rather ensure that I had the bleeding edge software running on slightly less than stellar hardware than running older software on cutting edge tech.

By getting the Nexus you are buying the peace of mind that you'll get the device as Android wants it to be.  Newest features (also some of the newest bugs), with timely updates and longevity.  I mean, if I didn't purchase the previous Nexus, I'd be still tied to my Galaxy S Captivate running Gingerbread (and that update was WELL OVER a year ago).  So with this device I've got great peace of mind that I'll have longevity with it at least until I get my next one (who knows when that might be).