I pretty much ONLY charge my phones via wireless.  Including my Pixelbuds... Love not having to plug them in.

The downside is that Qi is usually pretty slow.  If you want a quicker top up, you'll have to plug in.

Well, they do make fast wireless charging pads now (if your device is compatible with it).

A little pricey, but it's not your ordinary pad, check it out:

https://www.pure-gear.com/power/wireless-phone-chargers/15w-squared-fast-wireless-charger-with-wall-adapter-black-63466pg
So first off it's a lay down pad, at first you're like "well that's boring", but here's the thing; the stand up ones I've always found to be just very finicky for where exactly the charging sweet spot is, and what's good for my iPhone, isn't good for my Pixel, but is okay for the TCL, so some phones are okay, others aren't.

Laying it down, well, you can't mess that up, need to move it, simple.  Can't have something 'sit higher' on a stand.

For normal devices it'll charge at the 7.5W 'speed', whereas devices that can charge at rapid Qi, it'll kick it up to 15W. 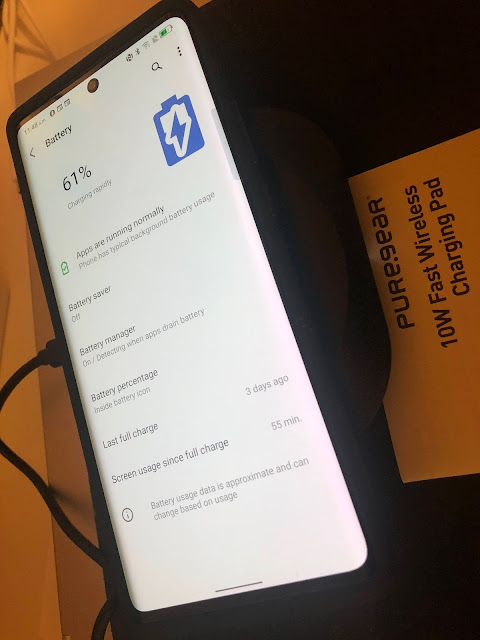 you can see just below the % it says 'charging rapidly'

You can see the TCL recognizing it charging at the better speed.

The real winner is the fact that in the box it comes with a 6' cable.  How many of those cheaper ones you can find online come with those 6" cables... that makes plugging it in hard to do.

You get the wall wart and 6' of cable to place it just about anywhere you want.  This is definitely becoming a permanent fixture for my desk.