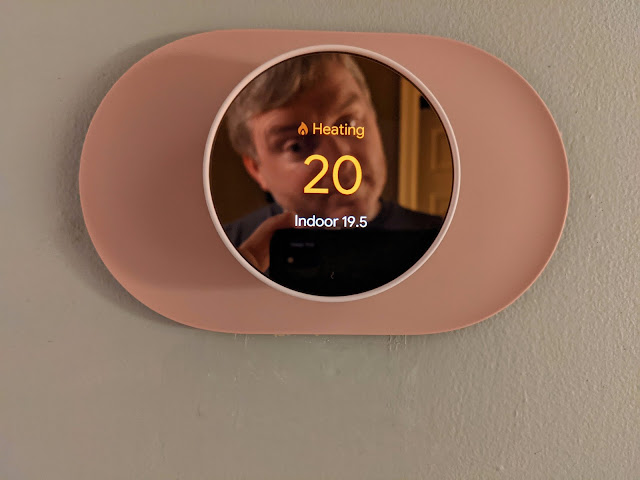 I love my connected home.  The Google Home app is getting fuller and fuller. Smart audio speakers, Chromecasts, Smart Displays, lights, a doorbell and even my thermostat.

I got my older Nest Thermostat E just as ol' Dougie was nixing the GreenON program.  It worked just well enough that I enjoyed it.  I could set my temps on my phone and routines as well as from the Nest app see what my 'leafs' looked like (how often I was being energy smart).

The new Nest Thermostat comes in at a $180CDN price tag and is a lot shinier.  It has that display under mirror look - and promises an updated device that eschews the old Nest app (thank you) to work solely under the Google Home app system.

So, I had the installer take care of the old E as they did it when I was at work and missed it.  Luckily the older base was there and was perfectly labelled. 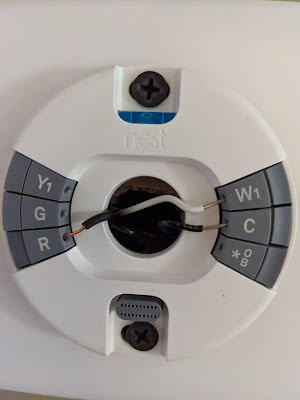 So all I should just be able to notice those wires, take them off, and connect them to the new posts, right?

I labelled the cables and took off the old base plate, and then noticed immediately that the new base plate is just slightly smaller.  Well, no biggie, it's not really holding much weight so being able to just put a new hole in the drywall is not a big issue.

Plopped the wires in (after killing power etc..) and plopped them in the new ones and followed the installation straight from the Google Home app.  It's a pretty nice walkthrough, that even a wiring simpleton like me should be able to follow through.

Except, for some reason it thinks that the W cable wasn't connected.  I didn't know how to proceed.  I disconnected a dozen times and checked everything - to no avail.

Eventually, I just skipped on and the installation continued on without a hitch (looking it up it's looking for that W, or W1/2/3 cable, and depends on if it's a single or 2 stage heating, so I may have said it was a stage furnace but maybe it's not?).

So, I have it working yet, it still thinks that the wire is missing.

Anyways, let's move on.  The next step for me was to remove the old E from the system.  I just went to the Nest app and looked at the only thermostat it was registering, and deleted it (the new one wouldn't show up there, whereas on the Google Home app I could now see 2 thermostats and it was tricky to tell which was which).

The tricky part for me is that as much as I love the new display is that no longer do you grab the whole outside rim and rotate, you just slide up or down on the right side.  And it's opposite what I expect.  I used to be able to rotate clockwise to increase the temp, but sliding clockwise (downwards) reduces the temp.  If I want to raise the temp you have swipe up (what feels like counterclockwise).

Okay, something to get used to.

Instead of just either 'on'/'off'/or 'leaf' (ecosaver) modes, you have a couple of 'presets now:  Eco, Comfort and Sleep, which you set up during the initial or from the Home app.

It's not super intuitive which mode you're in or if you're not in a preset and just another temp.  It's a little ... almost 'too smart' with too many options.  I mean I guess you could not use them and just play it old school, but that's not why you bought a $180 thermostat.

You can set up those systems also for a 'home' and away option, but I was unsure how that would work for just 'me' or anyone in the home (i.e. when we ALL go to work it's away, or just me?).

Alternatively, you could set up the 'schedules', which is a little simpler (and thankfully you don't have to switch to an awkward landscape mode in the old Nest app).

At a certain time, which preset are you going to enter.

Which kinda sucks, as there's no 'learning' option to this model.  Sometthing the E could do, as it would consistently learn what an optimum temp was, so with this you might have to be on your toes a little more if you need those minor adjustments.

One thing I did notice was that there is a slight delay in a setting and it being reflected in the app.  I'll set something to a preset or a temperature but the display in the app doesn't change, but get out of that screen and go back and it's reflecting the appropriate setting. Just odd that it wasn't as instantaneous as you'd expect Google to be.

You can dig around in the settings and see some other information (like how you set up the device, did you set it up as forced air, gas, etc...).  You can even see your 'energy dashboard', and I guess because it's just that time of the year where I'm heating more often.  I always find this the coldest time of the year where it's that not quite freezing out, that it works harder.  When it's -30C outside it doesn't seem to be working as much (maybe it's the back and forth of hovering around that comfort level).

So my dashboard doesn't look as good for my leafs.

What's worse is that it doesn't show the data from my Nest account from my old Thermostat (should I not have deleted it?).

That's really upsetting as I'd like to be able to start comparing this winter versus last winter.

So, I'm happy with it.  It works, just something new to get used to, and I have to say there have been often times that I've walked into the hallway and it says it's supposed to be at 20, but it's 19.5, ... give it a moment and by the time I walk into the other room I'll start to hear the fan go on.  So I don't know how well it's really monitoring versus my older.  Maybe because it's new and it has that missing W error that I'm hyperconscious of it.

I wish the backplate, for $20CDN extra was a little bit bigger.  I wish that Google had kept the sizes of the mounting the same size... I wish that the data from my old Thermostat was retained in my Nest/Google account.  Sad that didn't happen.

I'm a little upset, but not unhappy, but it makes the $180 a little bit of a harder swallow.

At least it looks snazzy (and matches the wall better than the white of the old E).