The New Google TV ... Chromecast with a remote

Okay, so Google TV, but not the Google TV that we saw way back with like the Logitech Revue (I kinda liked that), or the Google TV with my Nexus Player... damn, there's a lot of 'abandoned' devices with Google.  Yes, I'm that old...

So, they announced the new CHromecast with embeded Google TV and a remote.  For those that haven't ever used either of the 2 other iterations of Google TV / Android TV, think of it similar to say... Roku.  A device that actually has a super simplistic display that let's you load up "apps" to watch your streaming device of choice.

But, you're saying, I can already watch Netflix with my Chromecast now.  Sure, you can.  But you have to have another device 'launch' that service and cast it to the Chromecast.  Not a big deal, just means it's sort of there in the background of your device.

Wait, but if I have a Google Assistant I can just ask it to play on the Chromecast, or if I have a smart display (Nest Hub, Nest Hub Max).  Sure, but you still have to know what it is you want to watch.

I don't know about you, but often when I have those moments to watch something on TV, it's never a planned moment and it's more of a "okay, let's see what I can watch".  So being able to browse a display is important.  Which is why I really like my Roku.  I can use and then just browse around the channels we have 'installed' (Prime, Netflix, YouTube, Play Movies, etc...).

The Chromecast with Google TV is essentially that. 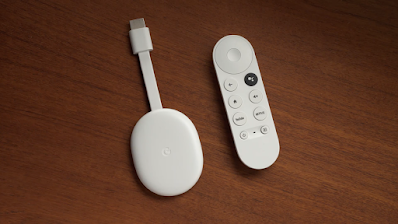 It has Google TV built in, which is a simple interface for some of the services you have connected with your Google services, and then you get a simple remote to navigate that interface.

It will be interesting to see how it handles multiple accounts, will it be like Roku where you pick which person is watching.

I'm really looking forward to this, however, with the oddity of Google launches, somehow a ton always leaks out beforehand, and in this case it was even being sold in some stores, so we've heard stories of how it doesn't work with Stadia out of the box.  Which seems a HUGE oversight, so I can't be replacing my Chromecast Ultra just yet.  For $70 I might just switch out from Roku actually... we'll have to see when I get my hands on one.

Chromecast Google TV Made by Google