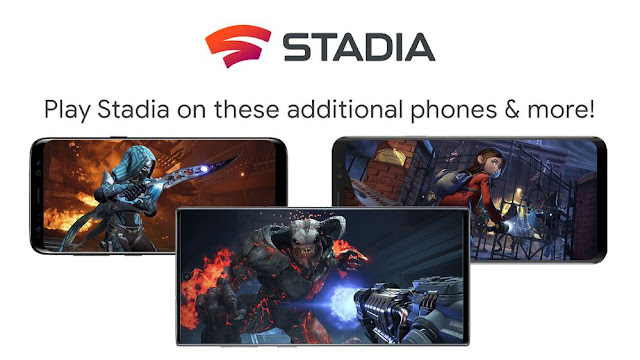 Currently, if you want to play Google Stadia, you're going to need a Pixel, a Chromecast Ultra or a laptop (I've only ever tried on my Pixelbook... my work's laptop has a block on certain gaming sites).

But, starting tomorrow that eligible device window widens as they add a bunch of new options to the list.  Mostly Samsung devices from the past couple years and a few Asus/Razer phones.

You'll still need to have the controller to play, and apparently, it's going to more tablets and laptops as well.  Personally, I don't know how I could play the games on a phone only... it's hard enough in some of the games to play on a 30" monitor

Check out their news here:  https://community.stadia.com/t5/Stadia-Community-Blog/This-Week-on-Stadia-Play-games-on-tens-of-millions-of-new-phones/ba-p/15326

Personally, I still have some issues with Stadia.  I like a few of the games, but this latest round of additions are very 'lame'.  And if you're joining this month, well the selection is pretty minimal, compared to past months, but you don't get those because you missed out.  This add some, lose some feeling they have is really playing into some FOMO to keep you paying to stay in.


Stadia is about to play games on WAY more phones.
Beginning February 20, you can play games on Stadia using a broad new selection of mobile devices. In addition to the Pixel family, Stadia will now support phones from Samsung, ASUS, and Razer. You’ll also soon be able to play on the brand new Samsung S20 line. More supported phones means you have even more ways to play games when, where, and how you want with Stadia.1
The complete list of new compatible phones includes:
Combined with compatible Pixel 2, 3, and 4 devices, Stadia will let you play games on more than 20 different Android phones beginning February 20. You can also play on tablets, laptops, and desktops, as well as TVs 2  through Google Chromecast Ultra. 3
Support for these mobile devices begins later this week. Play on a smartphone you already own with Stadia. Whether you’re using Stadia Founder’s Edition, Stadia Premiere Edition, or a Stadia Buddy Pass, enjoy playing on new phones!

1 Wi-Fi required
2 Stadia Controller and Google Chromecast Ultra are required for play on TVs.
3 Chromecast Ultra requires a TV with an HDMI port, a Wi-Fi network, and a compatible (Android or iOS) mobile device. Minimum OS requirements are at g.co/cast/req. Availability and performance of features and services are application-, device-, and network-dependent and may not be available in all areas. More information is available at the Chromecast Help Center. Stadia Controller requires a Wi-Fi® network and a mobile device running Android 6.0, Marshmallow or later, or iOS 11 or later. All features, functionality, and other product specifications are subject to change without notice. Additional terms, conditions, and/or charges may apply.