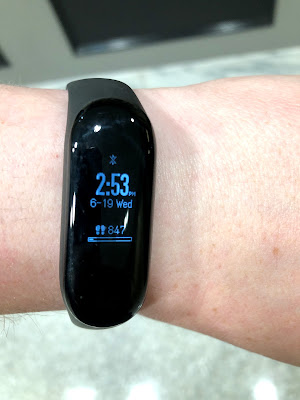 So, it's been about 6 months that I've been using the Xiaomi Mi Band 3, and back then I was pleasantly surprised by it..  Since the announcement of the Mi Band 4 I thought it might be prudent to take a look at how the band has held up in that length of time.

There hasn't been a lot of change to the device to warrant any new look, with the exception of a brand new app refresh.

Nothing really new on the app, just looks different now.

One thing I've noticed SINCE the update tho' is that I find I have to reset the band more often.

Previous to the update, I often am switching back and forth between a watch or the band.  Depending on what I want.  The LOOOONG battery life on this is really attractive for when I'm going out of town without a charger.

For the times I'm on a phone the band just sits there.  Now, the awkward thing is there's no way to turn it off and no way to quickly drain, so it sits on my dresser and vibrates when it's connected to the phone still and it gets a notification or buzzes when the alarm goes off in the morning.

More awkward is that when I go to use the band again, if unconnected too long (and that is a moving target it seems, what is too long... as some times just going to grab a coffee it's had this issue) you'll see the Bluetooth logo with the line through it, meaning it's not connected.  No matter what it just won't connect with the phone again and the only thing I've found to fix it is to manually reset the band, and then unpair from the app and add it as a new.

It doesn't take too long, and what's nice is that it recognizes it as a device we had once connected to and sets up the order of the screens simply (but it doesn't adjust the main screen to have steps included).

This update happened about a month or so ago, and I hadn't had to do these manual resets before, just since.  Weird.

It's a great band, still very comfortable and I haven't noticed any wear on the band as I pop in or out the device.

The integration with Google Fit is great, as I still use that as the main hub of my 'health apps'.  I have noticed that more and more there's a disparity.  Plus if I left my phone at home for a bike ride it barely registers as an activity.

I wish I could start activities from the band.  Being limited to just treadmills or 'exercise' is kind of saddening.  If I'm going to use a treadmill, I will probably have my phone with me.

Again, I lens my usage for this band as if it were more like the smartwatch with more sophistication.  And I had to keep in focus that it's not.  I've been okay not being able to get robust notifications and almost welcome it.

Keeping that in mind it really does a great job and the more sophisticated tracking ... well, go ahead and pay for it with a bigger smartwatch.  There are not a lot of Fitbits that can even do what this does and they're way more expensive.

So if you want something that has ALL the features, a smartwatch is for you.  If you want just a simple tracker, you really can't go wrong with these.  I'm excited to see the new Mi Band 4 with colour and NFC.