Posted by Ryan Moore on March 01, 2019
So recently I've changed all of our phones in the house to be a Qi device.  I really like the convenience of a wireless charger.  Just need more chargers around the house.  My side of the bed, her side of the bed, next to my computer, gotta have a couple in the living room; not to mention to have something for the car, my office...

And there's just so many to choose from on the web.  I do have to give the tip of the hat to iPhones for this.  When it was just Android manufacturers using wireless charging the options for accessories were pretty limited.  *sigh* 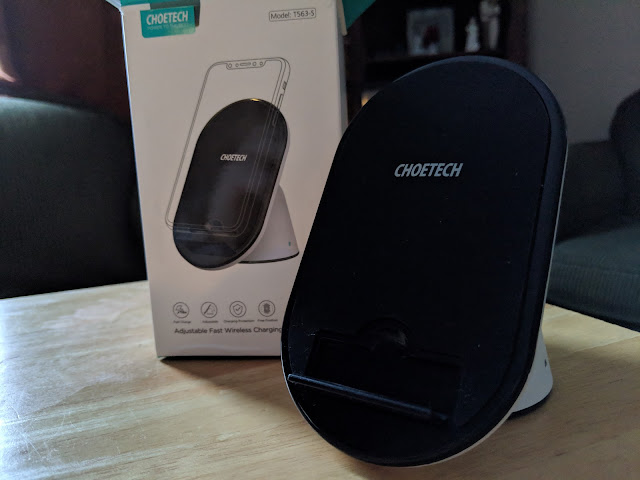 Okay, so today's review is the Choetech Fast Charging Stand - which'll run you $29.99CDN on Amazon. 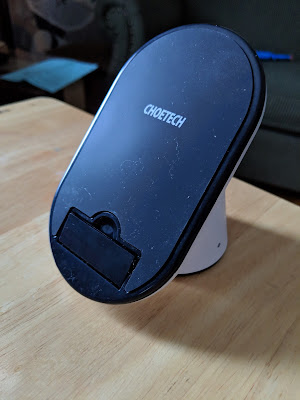 First up it's a 10W charger that can be 'faster' for certain devices that can take advantage of it (none of my devices tho') and it only charges via a microUSB port.

It doesn't have the wall plug for you, just the cable.  It requires you to have a 2A connection for it ... which is pretty common these days.

Now it can be a stand up 'stand' with a little lip for the phone to rest on, but this can also be adjusted to be flat (the little 'lip' can flip flat). 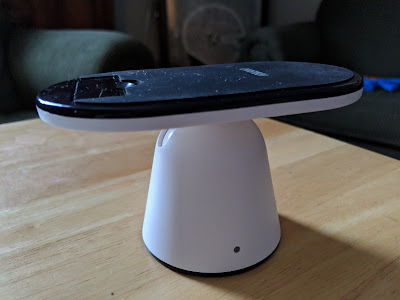 The 'base' part of it fits well in my cupholder in my van, but then it's hard to get the cable in to plug it in.  (it's at the base on the side)

Luckily, my cupholder is a dual side by side cupholder console, so I can use the second holder to have the cable plug in to it - but then that holder is useless (sucks to be the passenger).  So for me it's not ideal to have it in the car.

Guess I have 2 now on my nightstand.  Both phones charging wirelessly - no fumbling with cables.

As far as charging stands goes, it does the job.  No fiddling to find the 'sweet spot'.

It's 'standard' Qi charging for me (I don't have one of the Samsungs ... although apparently my iPhone 8 will get the 7.5W)  But I'm usually only using it at night anyways, so no rush on the speed.

It's a little pricey for just a Qi charger, but it has fast options, it also has the opportunity to lay flat or as a stand. Cheaper ones are just laying flat, whereas this now can be a nice stand up display on my nightstand.  So you're paying for that.