Posted by Ryan Moore on June 20, 2018
I'm looking across the table at a meeting and watching a few of my colleagues use old BlackBerries and won't give them up because they need to type.  Try as I might to show them how swiping keyboards or autocompletion works and is faster they still won't budge.

Problem is, their options are getting pretty slim.  Except the new BlackBery Key2 is coming out soon. 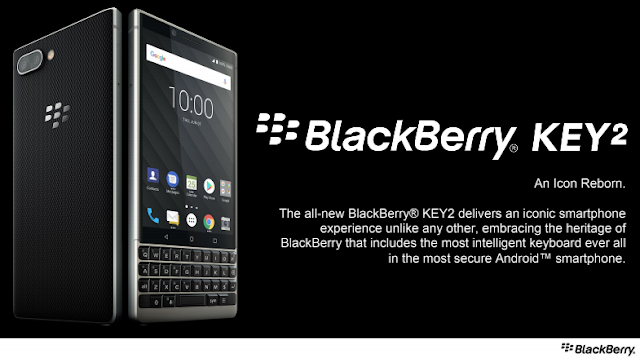 So go and celebrate Canada Day, heck the week and when you're done your revelry you can go and pick up the new Key2 for either $830CDN outright or from $95-$100 on a contract at Bell, Rogers, SaskTel or Telus.

Think you'll be a little too worn out from all the Canada Day celebrations to get it or have not touched your saved money to buy it, you can preorder the device starting tomorrow (June 21st) at Rogers.

Now, these will be the device in Black.  To get a silver version you'll have to buy outright via Amazon, or other online shops.

Check out the press release below for more official details.

The BlackBerry KEY2 in Silver will be available carrier unlocked at Amazon.ca, BestBuy.ca, Walmart.ca, Staples.ca, Blueshop.ca and Visions.ca in July starting at $829.99 CAD outright.

Rogers will begin offering pre-sale of BlackBerry KEY2 for both consumer and business customers starting on June 21. For more information visit a Rogers retail store or Rogers.com.

You can read more about the BlackBerry KEY2 here: https://blackberrymobile.com/blackberry-key2-an-icon-reborn/.

“Although there are many different smartphones for consumers to choose from today, most tend to offer very similar experiences without much distinction from one to the next,” said Alain Lejeune, Senior Vice President, TCL Communication & President, BlackBerry Mobile. “With the introduction of BlackBerry KEY2, we’ve created a distinct smartphone that captures all the traits that have made BlackBerry smartphones iconic, while introducing new innovations and experiences that not only make this one of the best devices for security and privacy, but also the most advanced BlackBerry smartphone ever.”

“BlackBerry phones are the world’s most secure Android smartphones. We design them for security from the inside out and we’re proud to partner with TCL Communication on the launch of their all-new BlackBerry KEY2,” said Alex Thurber, SVP and GM of Mobility Solutions at BlackBerry. “BlackBerry has been iterating and perfecting our approach to mobile security for decades, and we’re excited to have this new genuine, modern BlackBerry smartphone available for our fans around the world to enjoy.”