Posted by Ryan Moore on December 28, 2017
So, a while ago I had added some home security to the house.  The SkylinkNet home internet kit.  It's been great for peace of mind.

With the addition of my own Google Home Mini, I thought I'd try getting into the automation game and so tried out one of their smart lightbulbs.  Today, I played with the SkylinkHome mini screw-in dimmer LX-318.

The idea of the 'receiver' here is that you plug it into a light socket, and then pair it up with the home base you can then control the on / off of it with the app. 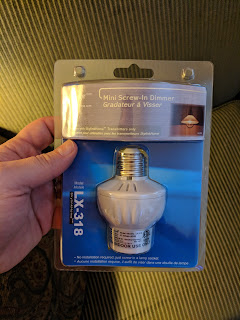 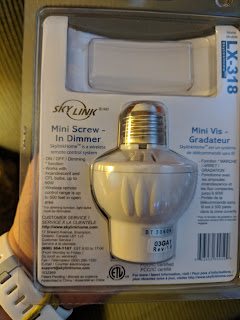 Pretty neat.  All for $20, rather than some smart bulb itself, you can then use this with any bulb.


...as shown on the site, they always show it from a ceiling hanging down.  I didn't have any of those in my house (or at least not without a cover over it that would prevent an extra few inches).  I have some table lamps, but the shades wouldn't allow the extra height.  I have some ceiling fans but it would look funny them poking out that extra bit.

I have a standing lamp and at the height and angle with the socket on, you can just barely see the bulb sticking out over the top.

Not an ideal spot, something I should have really considered at first, but a spot nonetheless.

So, plugged in, let's get it working.  Looking over the manual, I'm expecting a bit of a job... 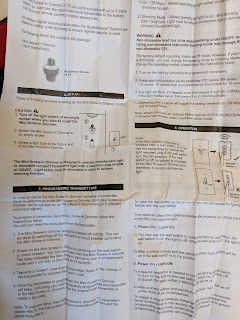 But, literally, all you do is plug it in, turn it on and then go into the app and choose to add an accessory and use 'learn' to find it. 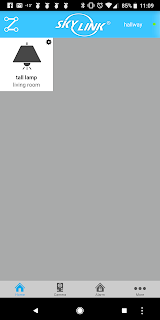 Tapping the settings for it you're presented with a few options: 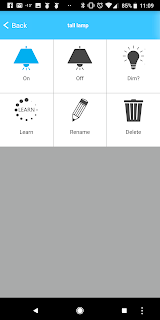 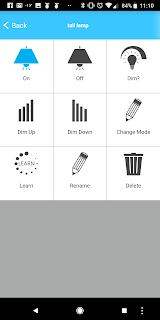 Either, turn it on or off, or if you can adjust the dimmer (can you get a CFL that dims?).

But turning it on or back off again here and there is a little laborious.  So let's explore the 'automation' options.

Here's where neat turns to frustrating.  There's a timer option... 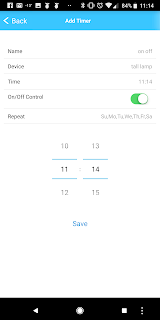 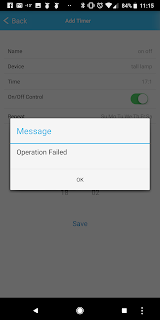 But I kept getting errors trying to set it up that way.  There was no simple way to set it up.  The IFTTT didn't seem to be an easy way either.

So, as awesome as it seemed, it didn't work.  I tried seeing if I could my Google Home system to take verbal commands, but it needed an IFTTT recipe and was just way too complicated.

In the end, a pretty nice low price of $20USD, but doesn't really make my life any simpler.  Dang, and I was hoping to set up some fun with having the lights go on with this and background noise with my Kinder to really help confuse the would-be burglar.