Posted by Ryan Moore on September 12, 2017
I find it funny nowadays when people start talking about how they need uber large batteries.  Enough already.  Most batteries will last the day anyways (Android's getting better and better at that) as well as the fact that when we need power there's usually a charger everywhere.  If you don't have a portable battery, we've suggested several on this site (personally I'm really liking this Belkin one), get one; and if you don't get an extra charger.  I have several as well.  One for home, one for the office and one for the car.

My home one just changed to this new QC 3.0 compatible wall plug from dodocool. 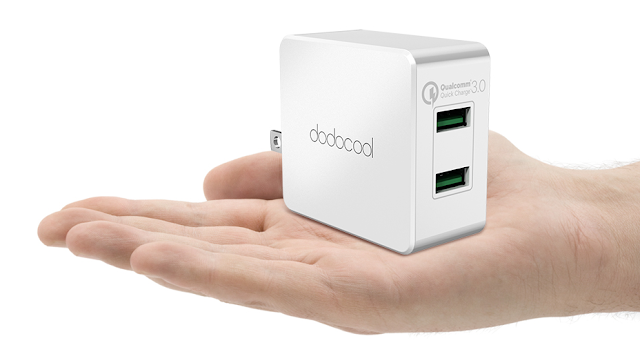 I've recently started to really like the accessories from them.

I use this one for home because, to be honest, lately I'm usually home for just a bit and then running out the door. So coming in from work, plugging it in while I gather my son's football gear and then head out.  Or, what's been really useful is not having to worry about plugging it in over night... just pick up the phone in the morning, plug it in, have a shower and it's back up to 100%.

Because, QC 3.0 is fast.  I'm averaging about 1%/minute which is quick in my books.  If, by the end of the day my phone is down to about 30%, overnight it'll only drain another 5%.  So in the morning I plug it in, have my shower, make lunches, put him on the bus and by the time he's on and going my phone is fully charged and ready to go.

It's really convenient to have speedy charging like that.  Plus this has 2 outlets so that 2 devices can charge (my wife can plug in her Moto Z Play and get turbo charging, which my previous QC2.0 charger couldn't do).

All for just $28CDN.  Now, some may say that's too expensive.  And sure, for a typical wall wort, it is.  But, when you factor in double charging, really speedy... compare that to the option of carrying around a couple chargers with you ... it's best to have 1 better solution in place than several mediocre ones.