frank. is a no-go with Indiegogo 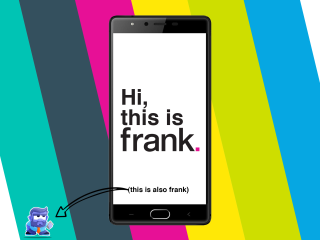 Okay, so I do have to say I'm not so surprised in a way.

When we were first approached by the frank. team, it sounded pretty promising.  A phone for $180?!

How great is that.  I had to stomach a fair bit of f-bombs to get through

Throughout the discussions there was such a focus on the $180 that I thought that it was obscuring some of the other points. $180 first off, despite being a couple of folks from Ottawa the price is in USD ... but then that's only the intro price, and then it goes to $240USD (and that's still only as a perk, regular 'retail' would be $280USD).  At that price point it puts it back into the realm of other midrange device prices.

The focus on the price alone had me somewhat skeptical, but still hopeful for the gang.  You know I have a spot in my heart for entrepreneurs.  Martin picked up the device and ran with the story so I didn't really dive much in.

Then we saw some of the 'journalism' from other sites which pointed out some of the concerns.  Had I looked closer ... but I didn't.  So thank you for that +Android Police.  In the end I never would have backed it, because I always do the math ...

But as AP showed, the phone, which the frank. team was making claims that they were designing, was really just a white label redo.  They just needed a few hundred people to also buy the phone so they could get the manufacturing discount, and they were set.

Were they up front with that in the beginning it might have been a better situation.  When confronted they did some backpeddling.  They said being removed from Kickstarter was because they were 'poached' by Indiegogo.

Kickstarter has a rule about just repackaging previous items as your own ... was that the real reason?  We don't know.

But, recently Indiegogo also has suspended the campaign.


Now, other sites have posted frank.'s response to the situation.  They say they don't know, they say they will continue.

Good for them.  Hopefully as they've changed their tune on the way they position themselves as the phone distributor.

Anyways, I'll share you the links and you can decide for yourself if you think this was a dick move by Indiegogo (the big guys bullying frank.) or consumer over-protectionism.

There could have been many reasons Indiegogo pulled it, I'm not rushing to conclusions, but I feel I have a pretty good idea.

At the time of this writing, frank. still hasn't updated their website with any notice and the 'go back us on indiegogo links are still up'; however, you can view their facebook post: