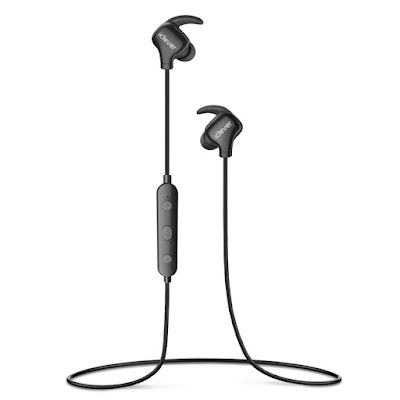 So it's been a couple years now that I've taken up jogging, and you'd think I'd be better at it by now and complain less... some day.  In the meantime, the absolute must-have for whenever I do stretch the legs is to have good music.  I've gone a couple times without music and it's the most annoying thing ever ... ever.

It's like THE most #firstworld problem I think I've heard of, but it's so true.  Running around needs a good selection of music to set your pace, motivate, etc...

Having good headphones or earbuds really helps convey that across too.  Now, jogging presents its own difficulties in accommodating a good set.  For years I've really shied away from the 'in ear' style so I was reluctant to give these a try.

First, I've never really had any luck with those little clips holding on to my ear.  Now in the box there were other fitting pieces, but these worked out of the box for me

So not only fit in, but stayed in for the duration of my jog.  It fit in snugly, and even when I was running with a bit of a sinus headache it didn't bother my ears.  That's a major feature for a good set of headphones for me.  Sound quality is second... if it sounds great but is uncomfortable, then forget about it. 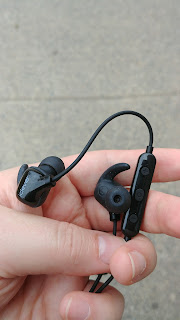 When it comes to quality of sound, it actually is pretty good.  Owing to the fact that the cups go right into the ear, they can be subtler with the volume and still produce big effects.  I like that taking them off my ears to talk to someone isn't blaring loud for them to hear what it is that I listen to.  Bass isn't RUMBLING, but you can hear the soft tones and it's a nice effect.

Now using the headphones is fairly simple, I paired it up with my Moto 360 Sport right away and the controls are simple enough to work.  Long press the middle to turn on or off, +/- for volume, and long press them for Prev/Skip (yup, it's backwards to my logic... to me, long press + should get you the skip... oh well).

In terms of lasting, it claims 8 hours, but after a week of my jogs and some usage back and forth to the office and my mobile office, I would wager that I used them about 4 or so hours, and it still hasn't asked to be charged.  And there's a lot of time in my day where I have access to a charger easily, so It won't be a problem for you.  Now, if you're jogging a marathon one day and then another the next and you use it for your train commute to and from... maybe 8 hours isn't enough for you.

They're a little pricier than I would prefer, but you can't argue with the quality of them, however.