Posted by Ryan Moore on June 01, 2017
Alright, it hasn't been that long since Motorola (oh, it's so good to use that name again) launched the Moto Z Play - it was October of last year we got our review.  And we liked it.  My wife just loves it!

Now, there's the Moto Z² Play.  I don't think it needed a revamp, as it's still holding up very well, but then again, any excuse to launch out more mods, the release of a new phone to go with it doesn't hurt. 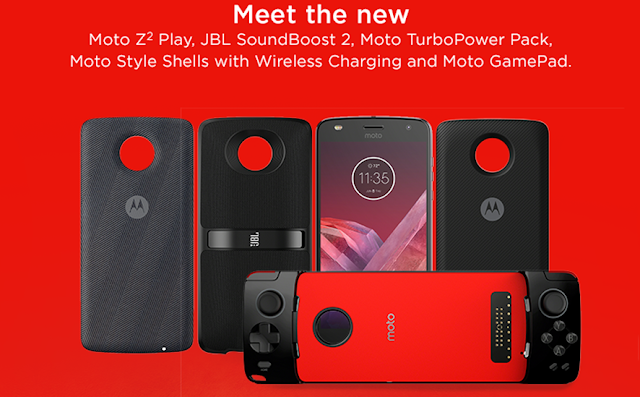 Today, Motorola Z² Play, but lifted the covers off of 3 new mods as well:  The JBL SoundBoost 2 (which my wife uses the first gen as almost the everyday connection), the Moto TurboPower Pack, a Moto GamePad and some more Style Shells.

These will all be available soon (summer!).

So here's the specs as it compares to last year:


Now, the device stacks up quite comparably to last year, the big standout for most will be the drop in the battery.  But at 3500mAh it really lasted and lasted (it was getting 22 hours with almost half of that with screen on time).  So it will still be a very good battery life (rough calculation would be 19 hours with about 9 hours of screen time).  Plus with the QC3.0 it'll be fast to get a few more mAh throughout the day should you need it.

That should mean it definitely will be way better in lower light, and it was already very good.

A neat upgrade is that the fingerprint sensor is now very similar to the one in the Moto G5 where it's more of a rectangle with curved edges, rather than a square, and it includes the gestures seen on the G5.

All of this for $499USD. Good buy.  I'm looking forward to testing it out.
announcement Mods moto Moto Z2 Play motorola