So, it's not something I like to talk about, but a little over a year ago my house was broken into.  It really sucked.  Chances are there's not much I could really have done to prevent it.  There are some weirdos out there.

Today's review is something that I kinda wish I had had back then.

It's the SkylinkNet Alarm system.  The company sent over the starter kit and a couple of the plug-in receivers.

This is pretty cool.  The main starter kit runs at $100USD and the plugins are $25USD each.  Put together you have a little security and home automation all controlled by the app 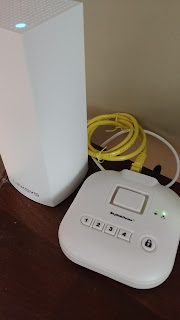 So the main 'hub' plugs into power and then somewhere you can plug it into ethernet; luckily, I have the Linksys Velop where each node has ethernet.  Which is great, because if I had to put the hub down by the modem in the basement, that would be pretty hard for me to ensure all the sensors will be within range (and if I needed to turn off the alarm manually, it's a further way to run). 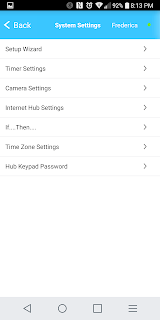 Okay, so it's plugged in, download the app and set it up.  It's a little clunky of an app and can feel like it's about to crash (and did at one point) but it works eventually.  Then it's all cool.  Don't forget to go into the settings and set up the pinpad password in case you need to turn it off manually.  It has to use numbers 1-4 and should be at least 8 digits.

Having the hub set is one thing... but it needs to be able to have some triggers in order for it to work.  How will it know when to sound the alarm?  (You can always 'slide to panic' to just test it out)

So the next thing to do is set up some sensors.

First up for me was the motion sensor.  Mostly because for the door sensors I couldn't fit it in such a way that the sensor fits on the frame to be up against the other piece.  So I have to think where I could use that properly.  Maybe a window frame.

The motion sensor is easy to set up.  The tricky part is where to set it up. I set it up on the landing of my back foyer up above with some double sided tape.  Wait, don't fix it up there yet because you need to pair it to the hub.  Essentially, from the app just go into the settings and set up and choose to add a sensor and then push a button on the inside of the module and it'll pair up quickly. 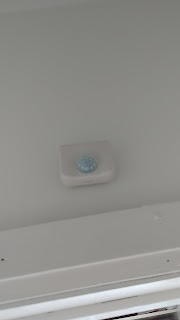 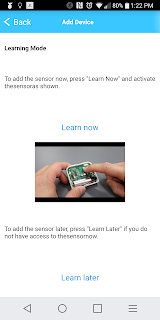 If you ever get lost, they do have a handy dandy visual manual that works very well in keeping you in step.

So, now we have the module added in and now we need to set up how it will work.  From the main screen of the app you click the little gear and you'll be presented with its options. 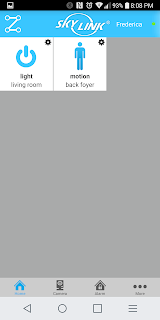 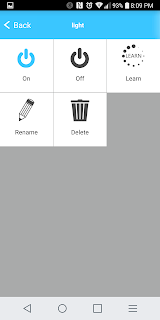 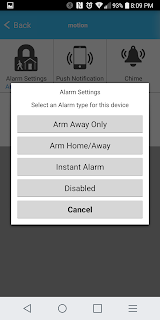 For me, I adjusted it that it only needs to really trigger the alarm when I've armed it and I'm 'away', plus I've turned off the 'chime' feature (I don't need it beeping every time I go to walk downstairs).

The other thing I set up then was the plug in receiver.  It pairs in a similar way as the sensor ... know that it says 'learn' on the manual, but the device says 'set'. 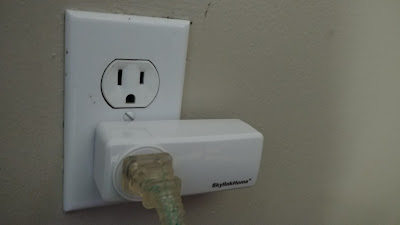 With it set now you can control it as on or off from your app.  Pretty fun.

You can go and set up more (I'd love to check out the camera next and get another motion sensor) modules and then really use the app and hub.

So, the main app you can set the alarm system. 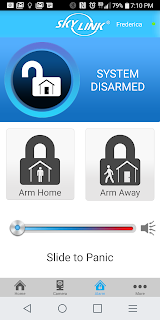 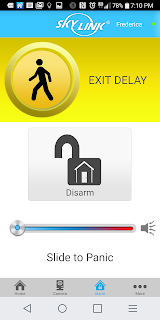 Coolest of all you could set it when you get to the office and realize you've forgotten.  Or you can disarm it before your wife gets home and she doesn't have the app on her phone and you've forgotten to give her the pin code.

The app will send you notifications of anything that goes (and again, you can play with the granular controls, so it doesn't have to send EVERY event). 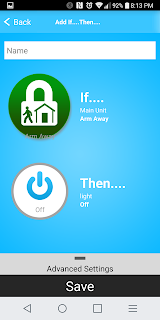 So I have the lamp in my living room to turn on (I know, it shows off, I realized the mistake after I did the screenshot) if I've set the alarm to armed/away.

There's a bunch of things you can play with there.  There's even some 'learning' and 'timer' options you can get into, but that felt a little 'next level' (i.e. next article).

The app itself controls the hub, which then controls everything.

The app itself isn't as robust and stylish as I would have liked, but it does what you need.  There's a spot that you check to make sure that the whole thing is up to date (c'mon with all the hacks lately, it makes a lot of sense to ensure you're up to date). 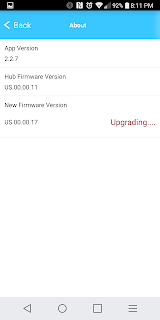 Even neater, there's a log you can look at to see what has been happening.  I wish that it wouldn't log EVERYTHING when it's not armed, but that's cool anyways.  You know me, I love more data. 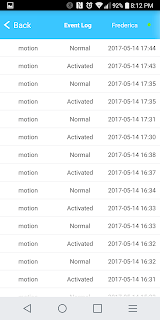 All in all, it's a great start to get into the connected system ... now for me to start putting those stickers on the windows, calling our insurance company to see if we can get a discount!

Which modules to look at next.  A camera for sure, there's some dialers (so that if the alarm is triggered it can call someone for you), and even more home automation.  Control your whole house while you're out on a trip!  I'm interested in the water level sensor ... a little sensor that will let you know if it detects water (in teh spring we can get some water in our basement, so it'd be nice to know as soon as it happens).

For only $100USD it's a good place to start for a little piece of mind with some fun on your phone too!
hub Review security sensor Skylink SkynlinkNet