So a few years back when we were deciding what school to put my son in.  It was only Catholic schools nearby, and if he was going to be bussed anyways, why not aim for something with the French Immersion program.

It's had some great results for students and been very trendy lately.  Plus, in my own professional career, I see more and more opportunities for those that are bilingual.  I used to love French... maybe he would too, and it will give him some advantages later on.

So, my son went to French classes.

Fast forward a few years and he's now in Grade 3 and it's been very difficult to keep up with his pace and homework without Google Translate.

With my struggles with helping him with "ses devoirs" and the advantages of being able to use French on my own at work I enrolled in some conversational French classes.  They're great.  And they've helped me with my speaking and listening.  But it's only once a week. Je besoin beaucoup de pratique

So this is where I turned to Duolingo.  It's an app that helps me learn a language. 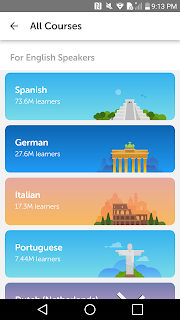 There's lots of languages to choose from, and I chose French (obviously).  It starts you off slow, with some simple words.  A lot of the words I already knew, but if you didn't you could tap the underlined words to give you a simple usage case to help you understand. 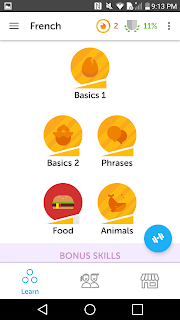 If you thought the lesson was going to be too easy, you could 'test' out and pass by it.  Trust me, try that... it'll humble you quickly.

The lessons you go through are a series of ways to engage your brain differently... instead of just always typing out the translation, they do it by either having you typing it out in either English or French (trust me, get SwiftKey and have it set to dual language mode, it'll save you swapping back and forth).  Either type out the phrase, or you can tap some words, or tap pairs of words, or there's even the option to listen to a phrase and type what you thought you heard or even times where it'll ask you to speak the translation (I should do those more, but usually I'm squeezing in a lesson at work or late at night in bed, so I turn off those features so I don't bother anybody). 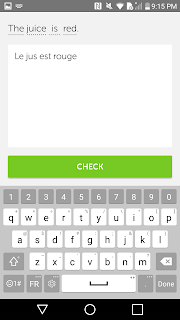 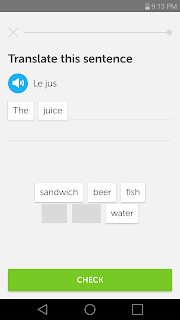 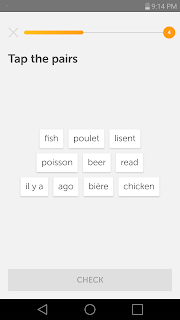 So plenty of options to keep your brain engaged while you go through, and more ways to engage your brain, the more ways your likely to retain it.

What's really awesome is how it recognizes words you get wrong and tries to reincorporate them in lessons down the road and has you redo them in different ways.  It's like it really wants you to learn!

But, like any healthy activity, it only works as you continue to work on it.  So, they have a nifty way of doing that.

First off there's options to set daily reminders.  I love getting mine about 7pm (I'm usually free around that time) and it'll say "hey, it's time to get back to your French, today you'll learn about ca, comme, ..." or something similar.  Somewhat motivating.

Secondly is that you set yourself a goal and it'll show you how far you're getting towards that goal, and how many days in a row (streak) you've done.  Who wants to break a streak? 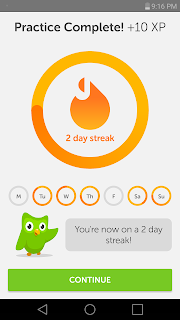 Couple that with the fact that while you learn, you end up earning some "Lingots" (in app currency) which you can spend on modules or 'power ups'.  I like adding in the extra modules to help me really get a good feel of the language. 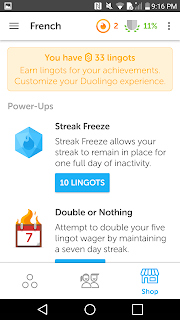 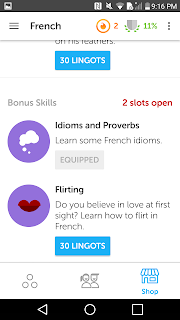 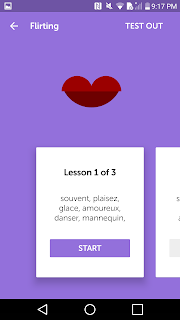 So much fun, and what's nice is that I can do the lesson and then bring my son over to try it with me ... and he can feel so much more confidence in the fact that "my dad got that wrong and I didn't".  He loves when that happens.

Add to it that it gives me a rough 'score' of how 'fluent' I am (currently I'm 12%... woohoo).  The type A personality in me loves to watch that progression.

Just got to keep up with keeping those lessons 'gold' (or full strength).

Great app.  Great for when I'm not in my classes, or when I can't bug +Martin Guay on Hangouts