Posted by Ryan Moore on November 14, 2016
So, it seems to be the month of health for me.  It's #Movember, I've signed up for a race at the end of the month, I got the Qardio items to review and even had an air purifier to make the air... purer.

Someone out there needs me to get healthier, apparently.

Today's review comes in the form of the TomTom Spark 3 cardio+music fitness watch.  And I'll say this, it's a great piece of hardware.  It's got a solid GPS, the headphones are comfy and sound good. 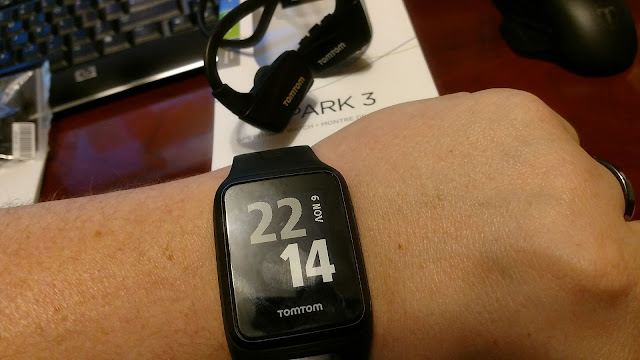 For me it comes down to the fact that I'm used to something very simple, and already easily integrated with the phone, Android Wear.  Framing this review with that in mind makes it a pretty high bar for anything to reach.  Anyways, I'll let my video do the talking 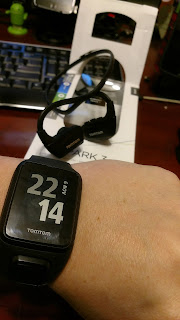 Yeah, in the beginning it was a frustrating experience.  I'm not used to it.  The button is just in that weird place well below the screen, that it's almost out of place, and the navigation using it is actual buttons that you press on the side (with that big of a centre, you'd expect it to be a touchpad).

It connects to your computer (how it syncs music, which I'll get into that later) via a bit of an awkward cable that clips onto the watch (which snaps out of the strap much like a fitbit) and then uses its software to sync and charge the watch.  I found the clasp a little awkward and there's no real easy way to disconnect it then to try to carefully wrench it off.  And what's weirder is the angle at which it connects makes it easy to hold.

Getting the app to connect wasn't so bad actually.  But for some reason it would have that 'watch connected' icon in my notification tray even when I left the watch at home, and other times when I was using it, the notification wasn't there.

Using the watch takes some getting used to, trying to understand what navigation options are available and how you have to move left or right to get to the feature you want.  And then knowing that there's no activity for 'walking' ... it's 'freestyle'.

Connecting the headphones to the unit was very headache inducing.  Sure, maybe it's because I have a LOT of devices and whatnot around, but it kept saying that it found multiple headphones to connect to and wouldn't let me choose which ... so to be able to use the headphones, I left my phone and everything inside while I walked away from the house with the headphones and the watch to get them to pair.  Only then did it work.

Oh, and the headphones... well, they sound great, but app to control the music (that's stored on the watch) is a headache in itself.  It's supposed to scan your computer for playlists, but for some reason on my computer it only found U2 playlist.  I tried making several and the app never saw them.  It would have been great if I could have just put a bunch of MP3s on the watch, but unfortunately it didn't work so easily.

Now, let's run with it.  Apparently, there's options to set up your route, or with their app to discover other routes out there. I couldn't find that feature, and to be honest, if I'm jogging, I kinda know where I want to go anyways.  So I just went where I normally go.

I was surprised how fast it locked onto a GPS signal and said I could be off and running.  I'm sure in the app somewhere there's settings to have it so that it announces your progress, but I didn't find that.  What was nice is that while jogging you could set the screen to display a variety of options (distance, or time, or pace...) and you could easily switch between and leave it there (most other watch/apps you have to set it prior to, and if you want to watch something else, you only get to for a moment until you glance away).

What was frustrating was that when you're finished the run, you have to hold the left button to go back to a screen, and then hold left again.  No biggie... but once the run is stopped, it doesn't stop and then show a progress, status ... anything.  Unless I looked really closely at the screen before I stopped, I won't know what my time/distance was.

Then, you're supposed to go to the app on your phone and it should sync automatically any data it has (for runs, etc...).  Except that it doesn't.  It once took up to 10 minutes for it to finally sync data between my watch and the app on the phone. 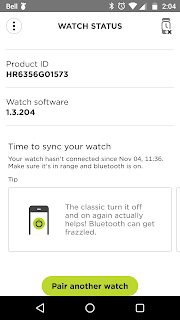 Definitely not friendly in that manner.  They must anticipate that this is an issue as they put a little reminder on that screen you watch frantically hoping for it to connect and sync saying "sometimes bluetooth is wonky, try turning it off and back on again" ... okay, maybe not word for word, but they do have that.

Once synced with their app you can do all the normal things other fitness apps do, like check your pace, pulse, etc... very cool.  I love data. 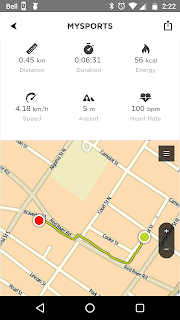 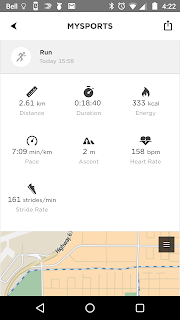 The app can let you connect it with some other services, like Endomondo and Google Fit (those are my personal services of choice).

You can share out your workout with your friends, but it does so a little differently.  Instead of a link the service so they can see your data, it's a photo with a snippet of the information.

Personally, I'm not sure I'm for or against that... I like to share my info, but I can see the use for not wanting to give out where it is you ran, or some more private information. 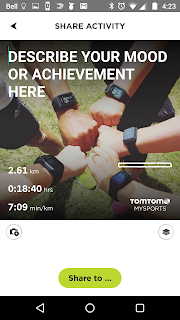 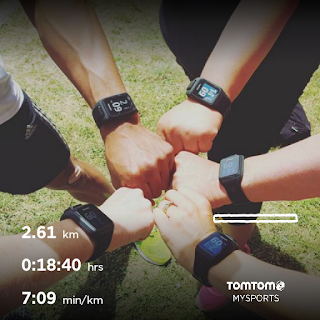 Okay, but back on track.

I did like the watch, I just found the navigation confusing, the app not as friendly (as I'm used to) and the option to listen to music almost a "just forget it" option... 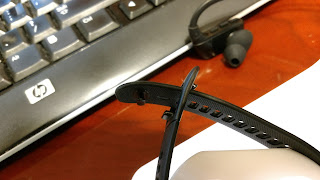 But the hardware is really nice.  The watch band has 3 different little 'clips' in order for it to hold itself into place.  It took some getting used to, but in the end I much preferred how it was done than to any other clasp type out there.

The headphones, really are great sounding and very comfy.

If you've never used Wear, then you'll like this.  And it would be cheaper than Wear watches with all the same features.

It's a real nice treat to be able to load up music on the watch, leave the phone at home and all the pertinent data is then transferred to the phone when you're done (pulse, gps, etc...).  No having to find a pocket, or arm band, or risk your phone on your run.

Personally, for me it just didn't match up to the ease of use that I'm used to.  I may still break it out for my race on Dec 3rd just to try something new again.  I did like looking over my heartrate at different portions of my jogs and compare that to my pace and cooldown laps.  It did that monitoring very well.