Posted by Ryan Moore on September 23, 2016
In a simple word, this thing has some heft and when you hear it you'll understand why. 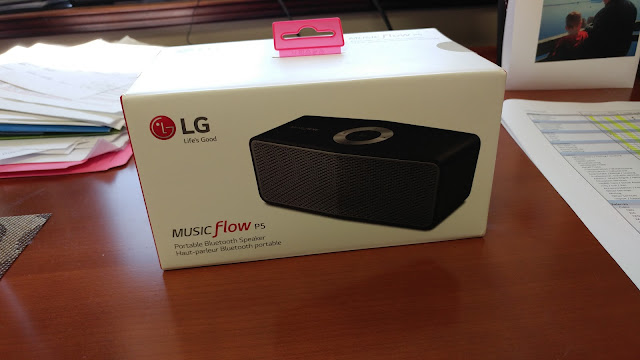 I've tried a lot of different BT speakers.  this is probably the smallest one with the biggest sound .. biggest bang for the size, and the smallest I've seen with stereo speakers built in.  The Sony cute little cubes you could get a couple of them together for true stereo, but this can deliver it in one go.

Plus, with the "Music Flow" feature from LG, you can do the same with these.  Pick a couple up and with the app, set them to act as Left or Right speakers. 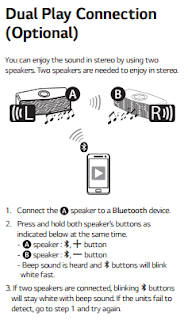 But, using just on its own is totally fine and sounds awesome.

Literally, it sounded awesome.  I did not expect it to be as crystal clear as it was.  It was almost as good as Samsung's Shape series speakers (but it couldn't go nearly as loud). For something I can easily pick up (even though it has some good weight) it really punches above its weight class.

Unlike some speakers where it's all about base or the treble is really distorted, this was clean across the spectrum.  Oh, and having stereo speakers really drove it home.  Plus, set it up and walk away from it it stayed quality as you got to a far side of the room.

On the top is just 5 simple buttons.  A power on, a bluetooth (in case you needed to put it into pairing mode ... but unless the main device is near it and on it will be in that mode already), volume up/down and a play/pause. 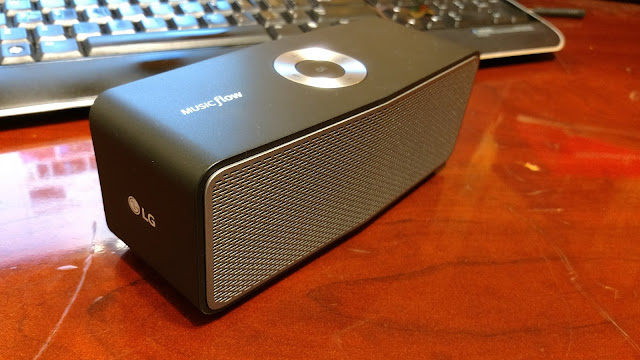 On the right side is the 1/8" input and the microUSB (note:  you'll get the cable but not the wall wort).

What you shouldn't go looking for is a manual.  There's not much of one in the box... not that there's a lot to figure out, but you would think that there should be something.  Like the tiny button above the microUSB port, I'm thinking it's a reset or something.  But I'd have to go to the site to download the manual to find out.

Another thing it's missing is a skip/prev button.  Not 100% necessary, but it would have been nice to have.

[Edit:  apparently if you hit the play/pause button twice it'll skip, and 3x for prev ... swore I tried it out]

Another thing it'd be nice to have is a battery meter of some sort.  You have no indicator on whether it's close to the battery dead or not.  Even on the phone's notification tray.

Then again, 15 hours of playback should be fine for whatever you're doing, but it would still be nice.

What was kind of fun was that it has 'multipoint', which means it can be connected to 2 different devices at the same time.  So instead of others that can have up to 5 or 6 devices, they can't do them at the same time.  This, you can have 2 phones connected.  First one to hit play gets the sound... pause on the first and whatever's happening on the 2nd now takes over.  Kinda fun.

After playing with it and loving the sound I went to the website.  I could only find it on the US site and it had it at $100USD.  Hrm... ouch... pricey.  But go look at the BestBuy site and they actually have it on sale for $80CDN right now.  That is definitely worth it for that quality.

Did I mention quality, clean sound?

I'm listening right now to some music and I'm loving how I'm hearing parts of the instruments that I might have overlooked or not even heard on other speakers.  As a bit of an audiophile, I love that.

On using it with my iPhone it was neat that on pairing it brought the phone to the App Store for their associated apps, it didn't do that on my Moto Z.  I would have liked to see an NFC tag on it for something like that.  I didn't use the apps as I saw no need really (the Flow app just plays music and the others seemed to be remote type apps, which you wouldn't need).

So, even at $100CDN it's a great speaker for the price.  It isn't just some standard portable jobbie... it'll be something your ears will actually appreciate.

Sure, 10W isn't a lot, but this isn't meant to power your deck party, this is a great solution for your living room, or den while writing articles or doing laundry but still want to enjoy quality music.

Source:  http://www.lg.com/us/home-audio/lg-NP5550B-portable-speaker (funny, I can't find them on the LG Canada site, but you can buy them from BestBuy)