Posted by Ryan Moore on September 11, 2016
It's no mystery that I like music.  I listen to it a lot.  And when you listen to items like bagpipes, you tend to have to listen to it privately as not a lot of people share the same opinion on the beautiful sound they make.

So, I often listen to my music via some sort of headphones.  Personally, I prefer over the ear 'cans' to earbuds, but I'm not one to close myself out of good opportunities.  Besides, it's really hard to jog with cans bobbing on your head, falling to the back of your neck, etc...

A while back I reviewed the House of Marley's Rebel BT set and I use them almost daily as I have a set at home and the office so when they offered me to review their Nesta earbuds, I thought I'd give it a shot. 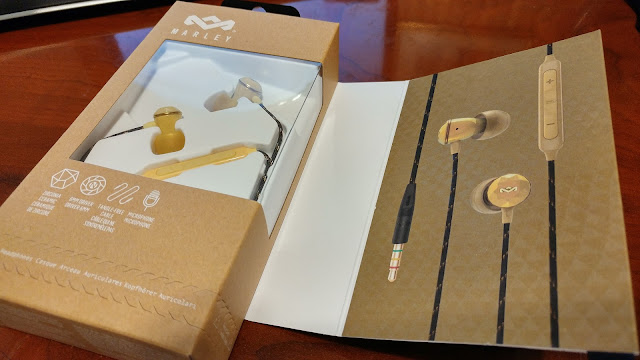 First up, I'm struck by the boxing.  I even had to do an unboxing video


So, now it's open and I get to play with it, ... I'm a little somewhat hesitant as I do like the braided wrapping to help with the durability, but the cable feels very thin, so under the wrapping it's got to be even thinner.  The bigger the gauge of the wire (the thinner) the more chance for a lower quality, or chances of interference.  Hrmm...

Well, it also comes with a carrying bag, some replacement/alternate ear cups and the cable has a 3 button remote with inline mic.  This is pretty standard now, that if it didn't include it, I'd be concerned.

Now, how does it sound? 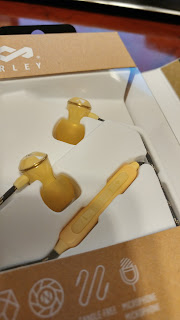 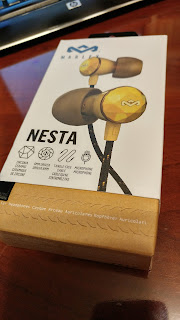 Actually not bad... I had been listening to music with the Rebels and plugged these in.  First up the volume is WAAY less.  I had my computer at 25% volume with the Rebels, and to match them I had to push it to almost 35-40% to have the same 'volume' out of the Nestas.

The bass is also greatly reduced, but considering the size of the buds vs a good set of cans, it's to be expected.

That being said (it's quieter, with less bass), it's CLEAN.  Like I had the distinct feeling on some of hte live recordings that I was there.  maybe it's just because the speaker is now closer to my eardrum, but I was able to really appreciate some of the sound more so.

Also, normally I don't like earbuds.  My ears just don't seem to like them.  Now, I didn't test them running around, but I was at my computer watching a few TV shows that had some strong musical scores in it and I didn't mind it after about an hour or more of use.

If you're an earbud wearer these are a good option.  They are a bit on the more expensive end (they're on sale currently for $50USD) and you know that with House of Marley, they're really looking at using sustainable materials, proceeds going to their charity 1love.org so you can feel better.