Posted by Ryan Moore on September 27, 2016
Do you like using a laptop?  Not me.  I'd much rather use my phone or even a tablet - but it's so hard to type on the screen.  For any work you'll need a keyboard and there's a million out there, all sorts.

When I like to pick one it has to be small.  It should probably have something to hold the tablet at the same time.  I've used the iClever BT and it's done me well in the past, but it's missing the holder for the tablet while I type, so I have to prop it up some way.

The device looks like a pentagon prism / tube.  Look around it and you'll find a material tag on it, which is where you'll find that it can unravel, and then reveal 5 rows of keyboard. 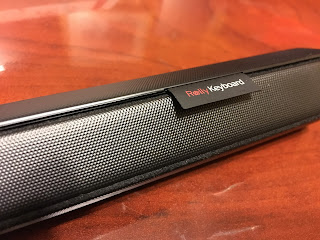 Then it has the some built in arms to hold the device, which is very handy, but feels a little on the flimsy side, but it does the job! 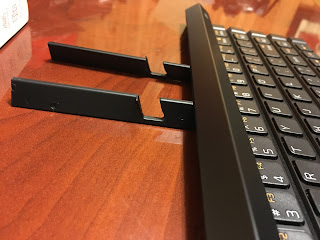 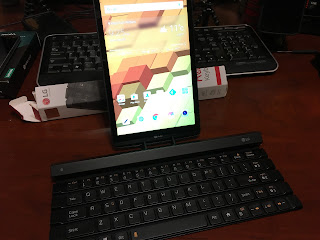 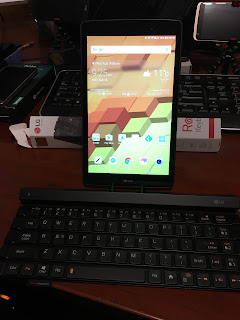 I love the idea that, like the iClever, by simply opening the keyboard up powers it on.  So if you'd already paired it to the device it'll automatically be ready to go by the time you've got it in place.

Now, the keyboard itself feels really nice and 'soft' to type on without a lot of 'clackety clack' so it's comfortable.

On to the downsides.

First up, it's $99USD, I found some online at $160CDN on Amazon (I found it as cheap as $114CDN but it wouldn't ship to Canada).  That's a bit of a hefty price to pay for a keyboard, regardless of its cool design.

Secondly, the keyboard layout takes some getting used to, mainly it's the back/delete key in the top corner.  The rest is just making sure I am a little mindful of where the shift keys are etc... in time.

Thirdly is probably the biggest hangup I have, and that it's powered by a single AAA battery.  For $160 I would have hoped that it could have something more convenient.  I can't find where it says how long it'll last on that battery (it says standby time of 3.5 months, but how much use time?).  To find out the battery level you can use the Fn+space to get the little light to blink either blue or red.  If it's red it means it's less than 15%... not a lot of guess room there.  Even cheap portable chargers give you a 3 led read out.  And for that battery the 'core' is still very big, considering in other keyboards the biggest piece comes from the battery, so it seems that it's exceptionally big considering there's not much else in there. 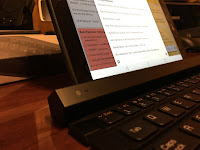 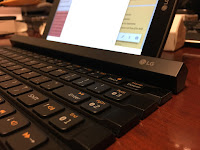 Overall, I liked it.  Typed nice, works as it should ... just in the end it's a little bit pricey for a stylish portable keyboard.