Why don't we have Android Pay in Canada? Let's find out

Posted by Ryan Moore on May 10, 2016
So a while back Google announced an I/O (I think it was almost 2 years ago now) replacing Google Wallet.

While we never got Wallet fully, the expectation for Android Pay in Canada was not really high.

However, there were gonna that it would land in Canada by Q1.

That's come and passed... With no word on adoption.. Yet. 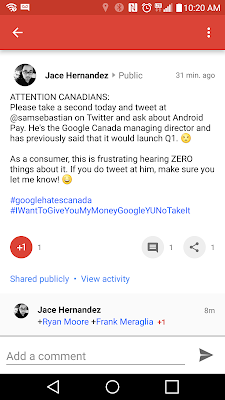 So one of our readers, +Jace Hernandez, suggests that we take up arms and tweet the heck out of Google Canada's managing director @SamSebastian and let him know we are interested in using Android Pay!