When I used to play games as a kid, some of my favourite were the RPG types.  The games that you really had to invest some time into and build up your characters and that took time.

Grinding characters endlessly to get to the next level so you can fight the next boss easily.

My friend used to joke that you could just get a clamp on your phone and hold down the attack button for some of the boss battles and walk away for a few minutes for it to finish the job for you.

Well, the game company "My" has built a game that just lets you essentially do that.


It's a game that you get different characters that you select to go into battle and you fight through a variety of stages and fight the baddies.  It's all very well done in the art department... your typical fantasy looking hulks and babes and very good animated attacking and motions by the characters.

What's neat is that it does the fighting for you automatically.  The only thing you have to worry about is picking the characters (do you want magic type that hang out in the back rank, or strong fighters in the front) and if they build their 'meter' up to full you can click them and they'll do their special attack.  Although the game allows you to put it into auto mode to let it do it automatically for you.

So, just sit back and watch your characters fight.

Like most games of this ilk you have to pay to play... well, not exactly. The game is free, and you're allowed a certain amount of 'energy' to take on fights.  When you burn up that energy you can pay for more, or wait for it to automatically replenish.

The game centres on you going through those stages... I'm on like 73, and I'm barely a third of the way through.  But as you go through more and more extra things show up for you to do... like caves (to mine more gold), or an arena (to challenge yourself against other players) or even 'trials' to really test the strength of your characters.

It's an interesting game enough, but still one that it would definitely take you some time to ensure you have enough energy to keep fighting and getting all the accouterments you need to keep progressing.  Like when you get enough stones/gems to get a new character and then have a newbie on the team who's miles behind everybody else.  You can spend your XP potions to level them up and then spend 'skill points' to enhance their attacks... but at 20 every 20 hours, and you want to upgrade 2 skills up to a level of let's say 30... it'll take a few hours.  More enticement to pay for it I guess. 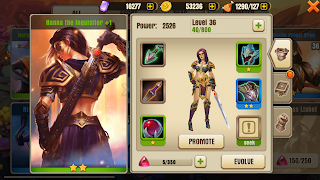 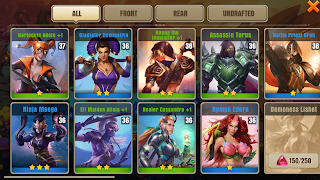 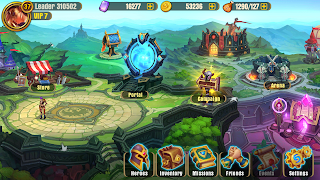 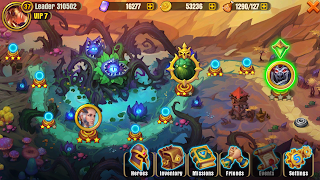 I'm not sure I'll stick with it through to the bitter end tho' ... as it can get a little boring just essentially 'going through the motions' with the game... but maybe there's new surprises as you keep leveling up and newer activities (and more ways for you to spend money on the in-app activities).

If it had a little more ability for you to customize what you can do, like picking specifically what armours or weapons... but no, everything is pretty well 'by the books', if you have no armour for that character it'll tell you what levels you can fight in to hopefully find it (or the pieces to craft it).  You spend a lot of your time getting the notification that you have more skill points to spend or something else is now available for you to do and you go through the app looking for the little red circles to tell you where you can act.

But, check it out... can't hurt - it has the right amount of automation for my lazy self.