Ingress rolls out their "Store"

Posted by Ryan Moore on November 03, 2015
So, since Ingress's parent company, Niantic didn't make it in the Alphabet fold under the new structure, they've had to become their own company.  They did get some funding from Google, but they're still now on their own.

So what's a company to do in that situation when they have a highly popular game and the future isn't exactly as easy to see?  Monetize.

Yup, Ingress now has a Store rolled out to the players where they can buy power ups and accessories for a few dollars.

I'll tell you first what those power ups are, and the costs associated, before I tell you my opinions. 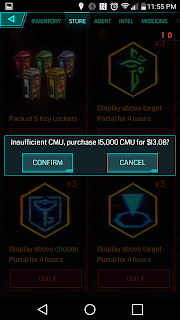 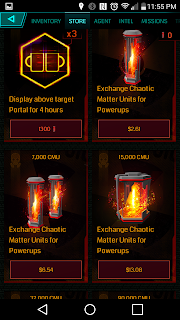 There's options to purchase different size bundles of CMU with better rates the higher you go. 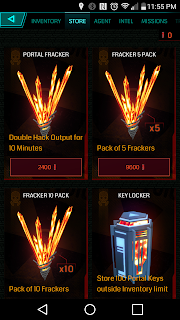 You can then buy a power up called a Fracker.  This doubles the hack output of a portal for 10 minutes.  So without heat sinks, 2 hacks worth if you time it right - giving you essentially 4 hacks.  put some heat sinks and some glyph hacking it could be a huge payout.  Also, this power up is for anybody that hacks that portal.  So a L8 farm fracked will be a nice payout for a group farming.

Then you can buy an accessory called a key locker.  These allow you to store keys in them, but they won't count towards your 2000 max item inventory (but does the locker count as 1?).

Lastly, you can purchase 'beacons', a graphical overlay that anybody can see in their scanners.  So let folks know what portal to go visit, or where the meetup is, etc...  I can see it might have some opportunity for planning or strategy, but mostly it'll be a vanity thing.

Beacons last 4 hours (about the length of most FS events). 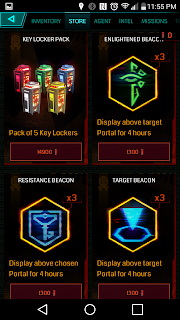 Now, what do I think of it?

A while back I had said to my team, that should a store open up, I would quit... I'm not sure where I stand on this.  Luckily it's not the store I had heard of; you know, all those 'skype me for a virus' or buy bursters online... so it's not shady like that, but still has the smack of something shady.

What do you think?
in game purchase ingress Store