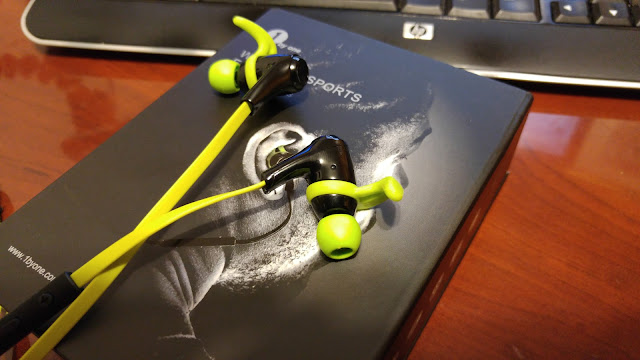 I've seemingly done a lot of reviews on bluetooth headsets lately.  It's like somebody knew I was jogging more and needed a new set.

The set I've received recently are made by 1byone and is the $60USD sports model, and I'll admit, it's a brand I wasn't too familiar with, so I was curious as to how it would stack up to the other sets I've been using lately.

First off it has those ear flap things to hook into your ear folds (I have no idea what the technical term is), but I was also interested in seeing how they would remain in my ears. 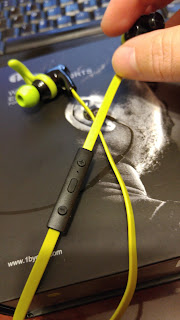 Well, let's first pair it up.  That was fairly easy... as per norm, from the off state, just hold down the middle button until it powers on and then even longer until its in pairing mode.  Then just go into your phone and pair them up.

Interestingly enough, you can connect 2 different devices via this method.

You'll notice that it's the standard button configuration as others, but what's great about it is that the Vol+ is the button you long press to get it to skip, and Vol- you use to go back.  It's a small difference from others that I've tried recently, but a welcome difference as to me, it makes more sense.

The other thing you'll notice when you get 'em working is the sound.  Oh god, it's glorious.  Okay, it's not perfect, but it's definitely working a lot louder than others I've tried out there, so it scores MEGA points in the volume and quality of sound department. 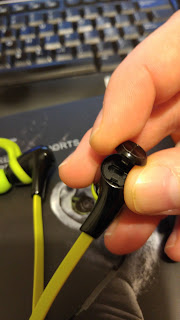 Finding the charging port was a little tricky, it's on the same side of the headphones as the buttons and there's just a tiny little slit that's almost invisible and then you get a nail under it and flip it up to find the microUSB port.  Charging it up will give you about 7 hours of play back.  Taken it for about an hour or so didn't show any noticeable reduction in the battery (you get a generic battery indicator on the phone - funny how they say that only works with iOS).

So how is it for usage?  Well, this is where it falls down... literally.  I jogged with my hoodie up so there was some amount of pressure to hold them against my ears, yet after a km or so there's definitely some movement in my ears and by the 3rd km I was having to periodically give them a push in and readjustment with the flap thingie to seat just right.

Shame as they sound really good.

The other down side happens to be the cord itself.  It's shown to be worn around the back of your neck, which is fine, but then it puts any controls (should you want to use them) almost behind your neck, so it means you reaching around to try to control anything (luckily my watch is easier to get at).  Wearing it under your chin is fine too, but when I run with someone else I like to let the buds dangle, and in this configuration they'd just fall.

Overall, probably the best sounding set of headphones I've tried, but just doesn't hold up to my usage.  Sure, I could have fiddled with various attachments (it comes with various size hook thingies or various size rubber cushions), but I think what it came with was just perfect size, and yet still was easily jostled.

If you're looking for a great set of headphones and you're doing light movement, I'd recommend these in a heartbeat.