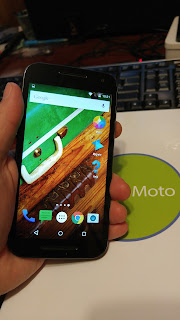 That mid-range phone option is really heating up - the latest greatest option in that realm is the brand new Moto G 2015 edition.

Recently announced at $200 it won't be the flagship device that has the top end specs or the greatest screen... but it has been hailed by many as the best bang for the buck in smartphones.  It's not going to break any records for processing speeds, yet  it is IPX7 rated, meaning you could put it in water for up to 30 minutes.


Nothing too fantastic there, with the exception of the camera.  I think it's a toss up between what I think the best feature of this phone is, the camera or the water proofing.

What happens when you turn it on.  It has a neat little animation to start up, some threads poking through for a Motorola logo.  Nice, and it doesn't take too long before the device has started up and you're in what appears, for all intents and purposes a Nexus device.

We've reviewed several of these devices over the past while, and it's always a nice refresh from OEM UI rebuilds (skins).  There's very little bloat (just 3 apps from Moto) and nothing from a carrier that I can tell (I did get my device straight from Motorola and not via a carrier).

Everything is very intuitive, which is why I like stock Android, the average user won't have to go searching for anything or figuring how to do X or Y feature.

What I do like is how they make it very easy for you to look at what kind of 'automated' features you can have.  Like setting it up to automatically behave differently for work, or night, etc... even allowing for some interesting 'actions' if you give it a flick of the wrist, it'll open up the camera, etc... (it's the same we've seen since the original Moto X). 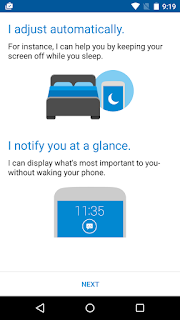 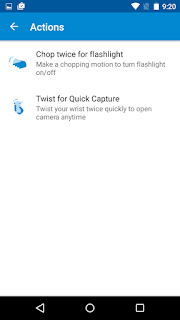 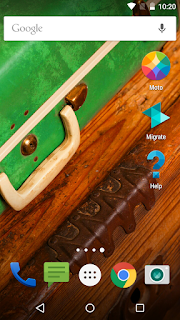 There's hardly any 'bloat' on the Motorola phone (you can see in the screenshot there's only 3 apps).

Especially when it comes to the camera.  Simply tap the screen to take the picture.  There are some manual options you can set, and the interface is very simple.  Nobody should have a hard time using it. 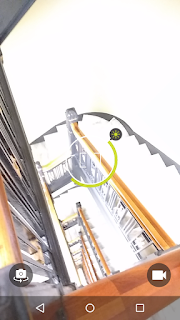 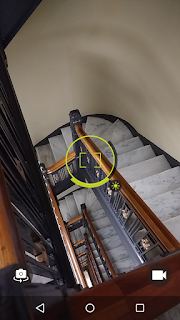 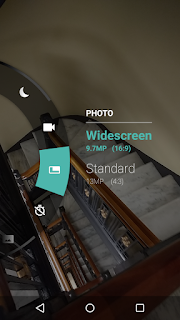 And, the camera takes some really nice photos. I'm kind of impressed actually. 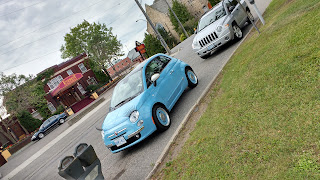 You can view my samples here:  https://goo.gl/photos/jG6uf5Qw96pCmcZ97

Then there's the water proofing.  I had to test it out.  Forgive the vertical video - it's hard to one hand

It lived... and still lives.  Even though after I checked it, it turns out I didn't quite do up all the snaps.  That's really important.

One thing to keep in mind is that if you do this... don't do it with the leather flip case (as it got wet and took nearly the full day to dry out).

Better than losing the phone I guess.

Speaking of the flip case - it doesn't come with it, but it's a nice handy little thing.  The magnet that it uses to sense when it's open/closed is strong enough to keep it closed when it's upside down, so it doesn't just loosely flap around. 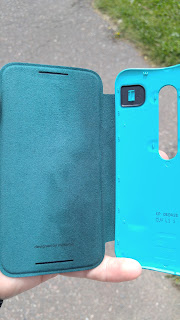 Downside of the case is there's no window for the camera, so you kinda have to feel like a grandma taking a photo with the iPad by using both hands, one, to hold the phone, one to hold the flap.

I let my son play with it for a while, and he immediately installed a bunch of games and played with it for maybe an hour or so.  After, I asked him if it felt any different from using his regular phone (a Note 2) and he said it was just as fast.  I find that a little hard to believe (well, maybe a Note 2...) as personally I found using the phone fast enough, but definitely you have the feeling it's not going to handle the heavier options.  Some of the games did take a little longer to load (like in switching some screens).  Which is fine.  I'm used to using flagship (top end) devices... and a $200 phone should be pitted against them as a benchmark.

I also found the screen a little cramped to some typing; even at 5" it's the 720p I found to be a little 'tight' as I usually made errors whenever I would type on something.  The G2 is 5" as well, but at 1080p it's got some space to play with for its pixels.  Specifically whenever I'd play a game and the onscreen controllers you'd slide to move left or right, I'd find I'd slide it to the left and then next thing you know my fingers are off the screen.  But maybe that's just my fat fingers.

As for battery, it was hard for me to judge as I never put in a SIM card, but it definitely lasted and lasted.  Even with my son's hour long gaming session there was a drop, but not a 'holy crap that chewed up the battery' like with some phones.

For me, it's not something I'd want to purchase and use; but that's okay, I'm not their main demographic... the heavy user.  It's like asking a general contractor to use a Smart Car for his work.  It's a great car on its own, just doesn't have all the bells and whistles.

This phone really is made for that person who's not quite ready for a full on power house phone, but just needs something as a 'texting box' as my friends call it, that has some smartphone options.