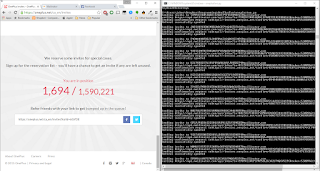 It's no secret about what I think of the OnePlus invite system.  Yet, there's now over 2,000,000 folks clamouring for theirs.

One genius, Jake Cooper, had enough.  Especially after finding that others were 'cutting in the line' and moved him from 9,000 to 70,000th position.

With a little internet magic he found a way to hack the invite system to move himself up the line.  Twice.

It's quite the hilarious read.

Essentially, what he did is make use of the invite others system, whereby if you invite others, you can move yourself up the line.


He built some scripts to automatically generate a bunch of invites to fake names, and then moved up to under 200th position.  He then told OnePlus about the vulnerability, and they patched it.  Then he did it again... this time inviting a fake gmail account using the '.' options (similar to how I got a ton of those KitKat codes).