OnePlus says how I feel about rumours (on the Snapdragon 810) 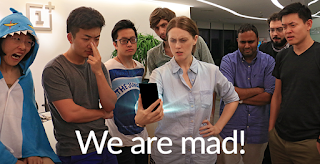 If you've been tuning into our site for a while, you know there's a few things I'm into... LG, databases, etc..

But you also there's a few things I despise:   questions in the headlines of articles and rumours.

Lately there's been lots of rumours flying around, and I'm not about to get into them.  I'll let the rest of the team take care of those.

But today it looks like one company in particular, OnePlus (who's never been afraid to speak out about how they feel before), is speaking out about their thoughts on rumours.  I thought it quite funny (they meant it to be), but also apt.

So the OnePlus group are taking to their blog to explain they're feelings about what people are saying about a speculated chip in their next device.

Okay, it's not speculated they're going to use the Snap810 in the OnePlus 2, they say it several times.  Including about how it's costing them so much.

But in the past, there was fears that the 810 overheated.  The Samsung S6 avoided apparently because of it (or more likely, because Samsung makes their own Exynos processors and wanted to use them).  And when the G4 came out with the 808, people again thought it was because of the dreaded 810.

So, when OnePlus mentioned they were going to use the 810, their forums went nuts with 'OH MY GODZ YOU'LL BURN DOWN THE HOUSE'... or something like that.  I don't really wade through the site too often.

They've taken to their blog to hopefully quell the malcontents ensuring them that it's going through testing and 'just wait' (oh, god, the horror of waiting) and that it'll only clock at 1.8GHz x8 for cooler temperatures.

My favourite line is:


We should ALWAYS keep that in mind.