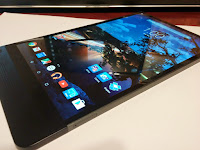 Earlier last month +Ryan Moore featured his review of the Dell Venue 8 7840, which you can view here and this prompted me to put my hands on it and take it out for a spin myself.

From time to time we at  like to play around with the same device and report our perspective on new devices hitting the Canadian consumer market and I decided to bring you my view on this slick tablet.

Firstly, this tablet is really on the slim side of things, but don't let that fool you, it's actually heavy in your hands. The look and feel is very high end. Ryan wasn't kidding when you hold it the way you should, the camera is definitely in the way. My left palm covered it entirely.

The bezels on this baby are super slim, got to be careful not to put my hands in the way of the touch screen, cause this is going to be a nagging factor.

The display is vivid, crisp and very nice to look at, kind of floored a bit by how well it handles. Now, since it's a newer tablet I decided to put it into gear. Loaded a 4K video with high octane action and it did play very well for the most part. I did notice a bit of latency and dropped frame rate, now the common user probably wouldn't even notice, but this is why I was doing it.

I also decided to load a high octane game. I'm sure some of you will be familiar with Implosion, which was released on Android not that long ago. With that in hand, I played a good hour on it and WOW, holy balls this thing flies.

I put it up against 2 other tablets; Sony Xperia Z2 Tablet and the HTC Nexus 9. It handled itself at the top like the other 2 did.

I would easily pair this tablet with a nice folio keyboard and mouse combo, plus having the proper dock elements to connect it to a large monitor this could be a replacement desktop PC.

I won't go into all the details, Ryan did a good job on covering the device and the software it harbors, but I did however take a closer look at the camera on the back with the 3 cameras. It does provide an interesting perspective for taking pictures, but between you and me, I'd rather use my camera phone or my DSLR.

Perfect for gaming, working and reading a magazine. It's well rounded and offers everything anyone may need.