How to Get Official Microsoft Office Apps on your phone/tablet

Posted by Ryan Moore on May 19, 2015
One of the main questions I used to be asked all the time from new Android users was "how do I get Office?" 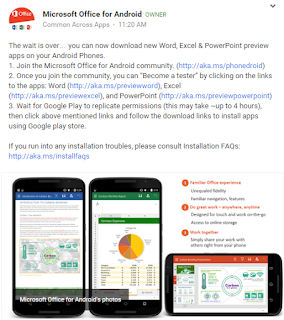 Personally I wanted to smack them and point them towards Google's Drive, but some folks are a creature of habit and want to work with what they already know.

Previously MS Office was only available to just tablets, well, now it's opened up the beta program to include phones as well.

So, if you're a die-hard MS fan, or have folks that you don't want to have to retrain on how to use Drive, you can now start getting the official apps from Microsoft.

Right now it's Word, Excel and Powerpoint (Outlook is a different app); and to get it, as per usual beta rules, you have to join the specific community and then click a link in the community to 'become a tester'.  Once you're a tester you can then go and install from the Play Store.

I have to admit, they do look really nice - props to Microsoft for doing some nice apps for Android devices lately.