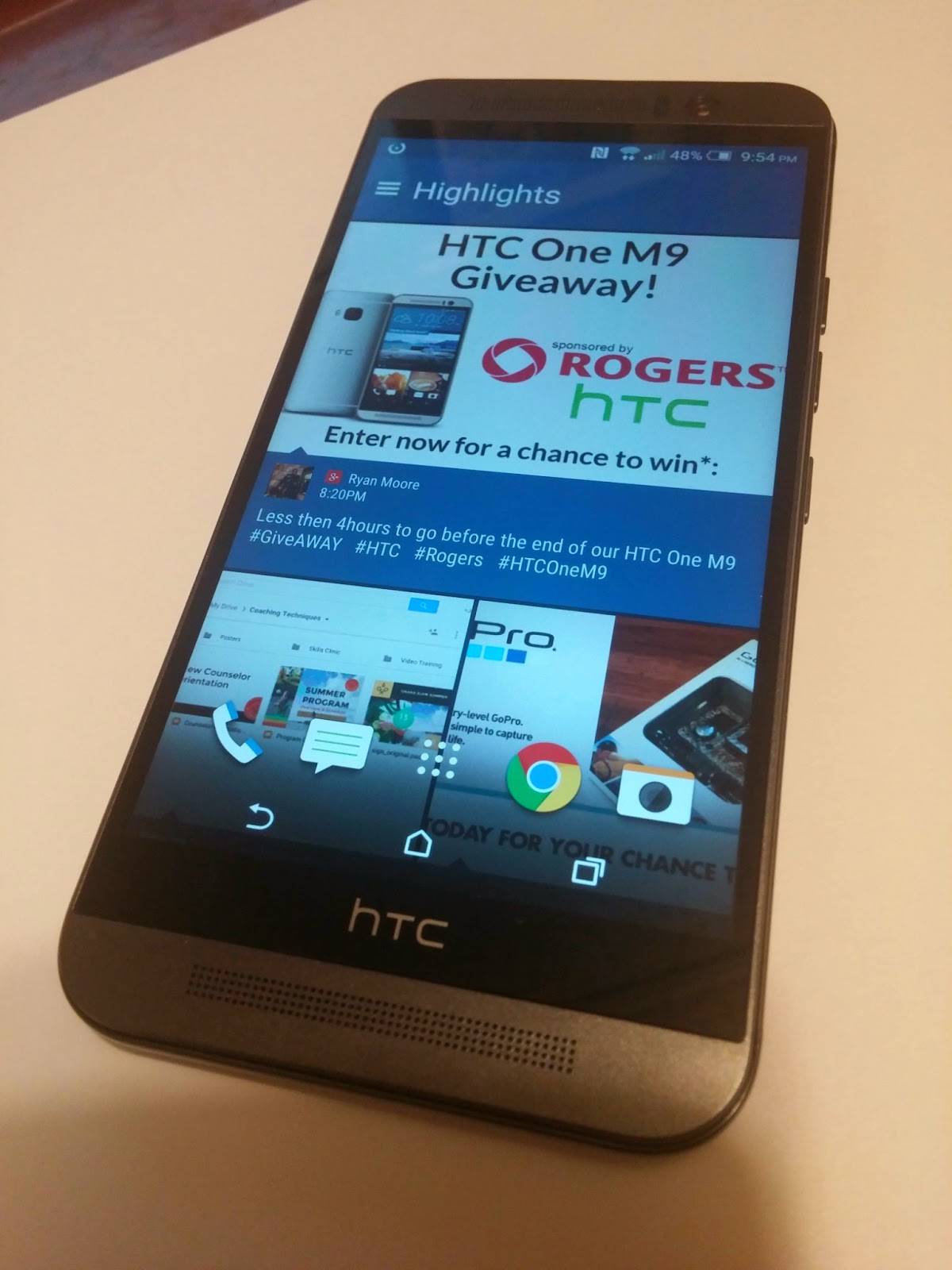 I just have to start out this review by saying thanks to Rogers for allowing us to give this device to a lucky winner. By the time this review is published, you'll have been picked and notified.  So congratulations to you... you're getting a great phone. 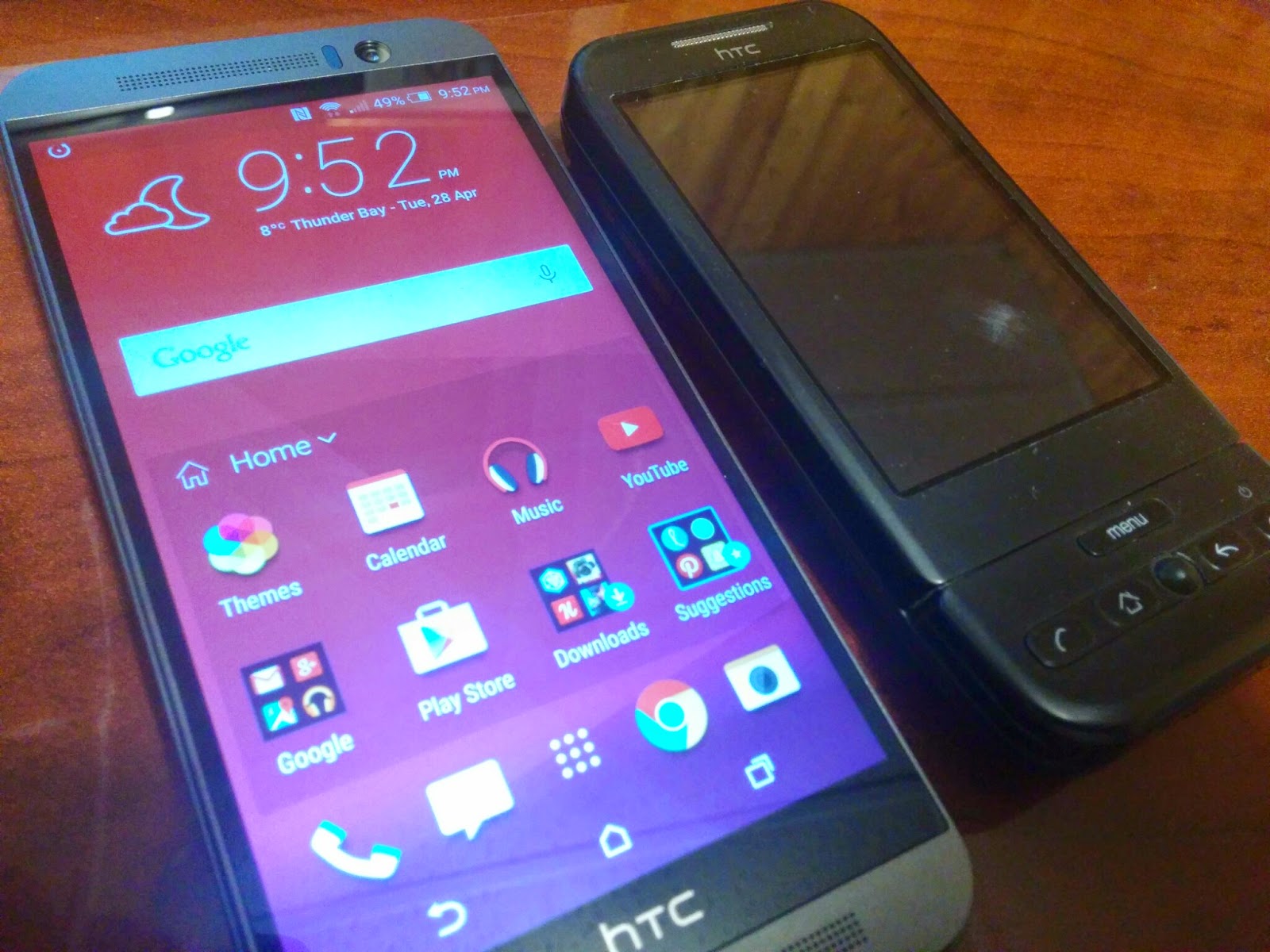 HTC holds a real special place in my heart as the first Android OEM.  I still have an HTC Dream on my shelf (I didn't own it at first, I had the Magic instead, but gave that to a friend, who still uses it daily). 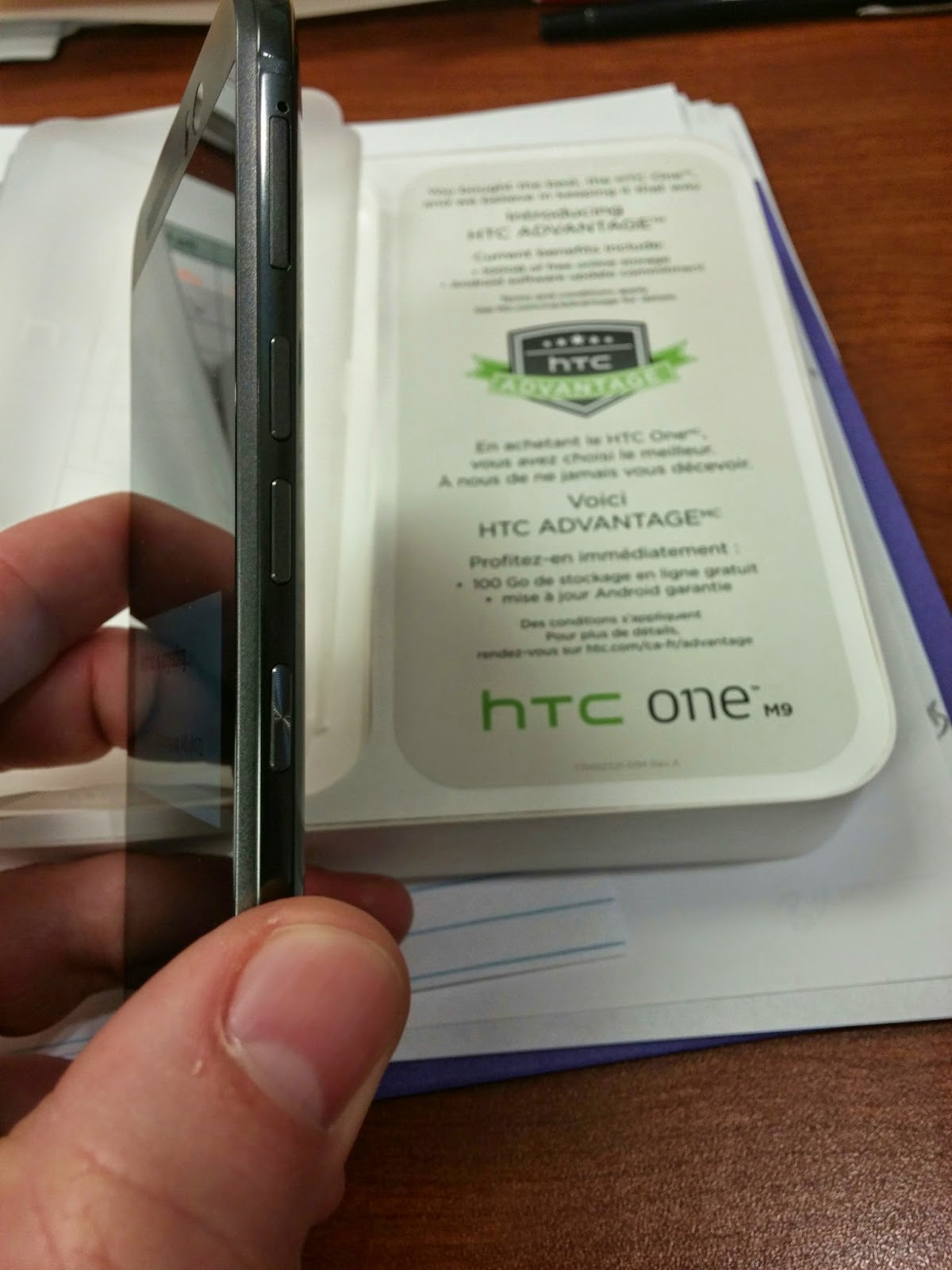 With their latest line up of "One" devices, they've really built something great.  However some folks think that it's not been enough and they have had some less than stellar sales years... but it seems to be on the rebound right now.  This latest iteration, the M9 will definitely see to that.

Let's take a look at the device shall we.

Quickly, here's my quick review with my noted top feature:

Before we even turn it on, let's take a look around the unit.  It's got a really nice sleek finish to it, without it being slippery.  You'll also notice what feels like the back plate is slightly larger than the front frame, making it look like there's a tiny case all around it already. 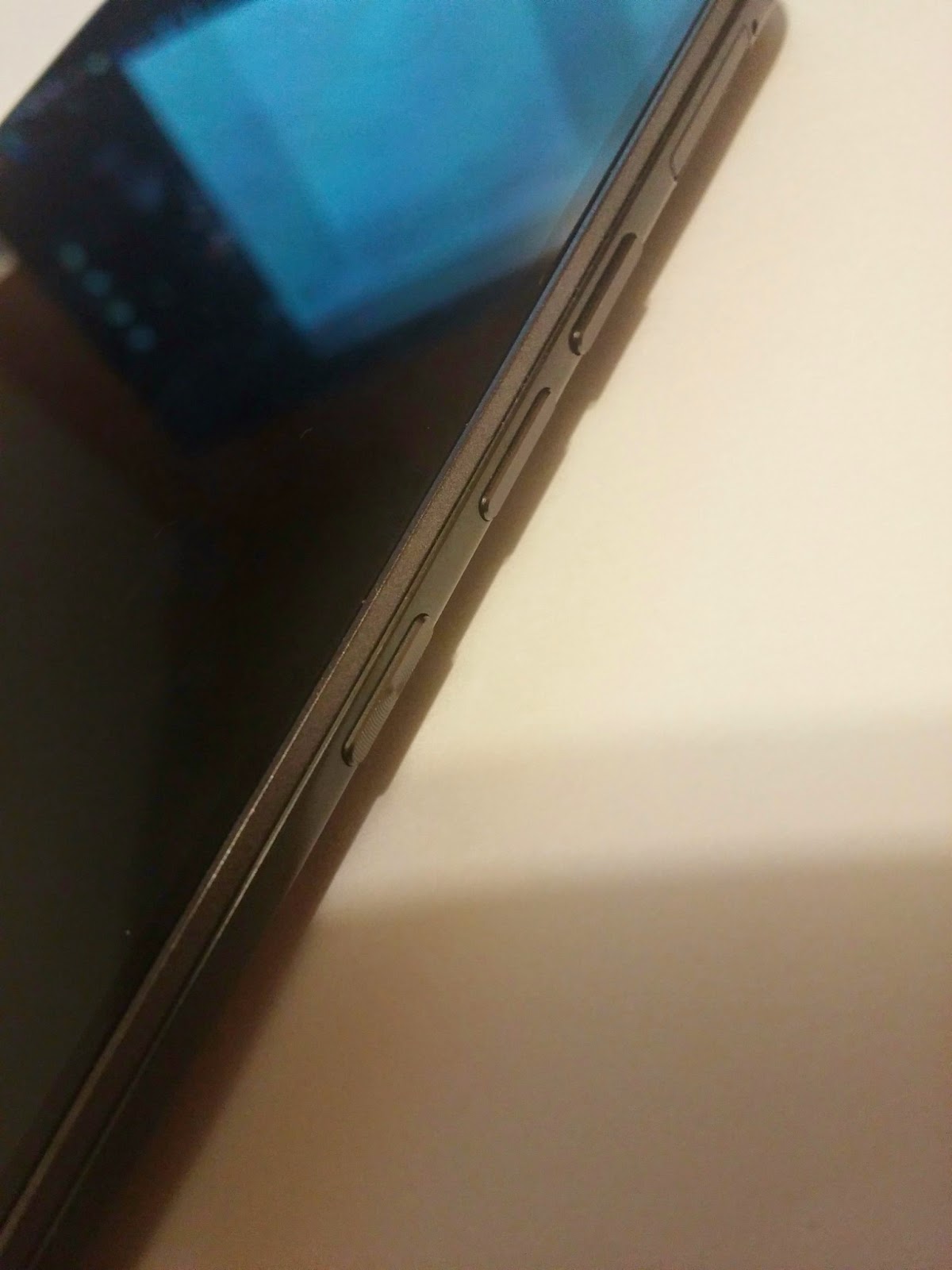 Buttons are all on one side right now, along with the microSD port; which is a little difficult to get into without a pin of some sort.  So don't be expecting to change this on the fly.  The power button is at the bottom of the grouping of buttons and has a different 'texture'... that being said I always went to the top button thinking it was power.

The top of the device, where the power used to be is now one long bar that houses the IR - which I love.  I really would have a hard time using a phone without IR.  Not that I use it a lot, but it's handy for when I do want to.

The camera housing does cause itself to stick out ... which seems to be a trend this year (iPhone 6, Galaxy S6...), and it makes me a little uneasy, but I haven't noticed any scratches or issues with it while I've used it. 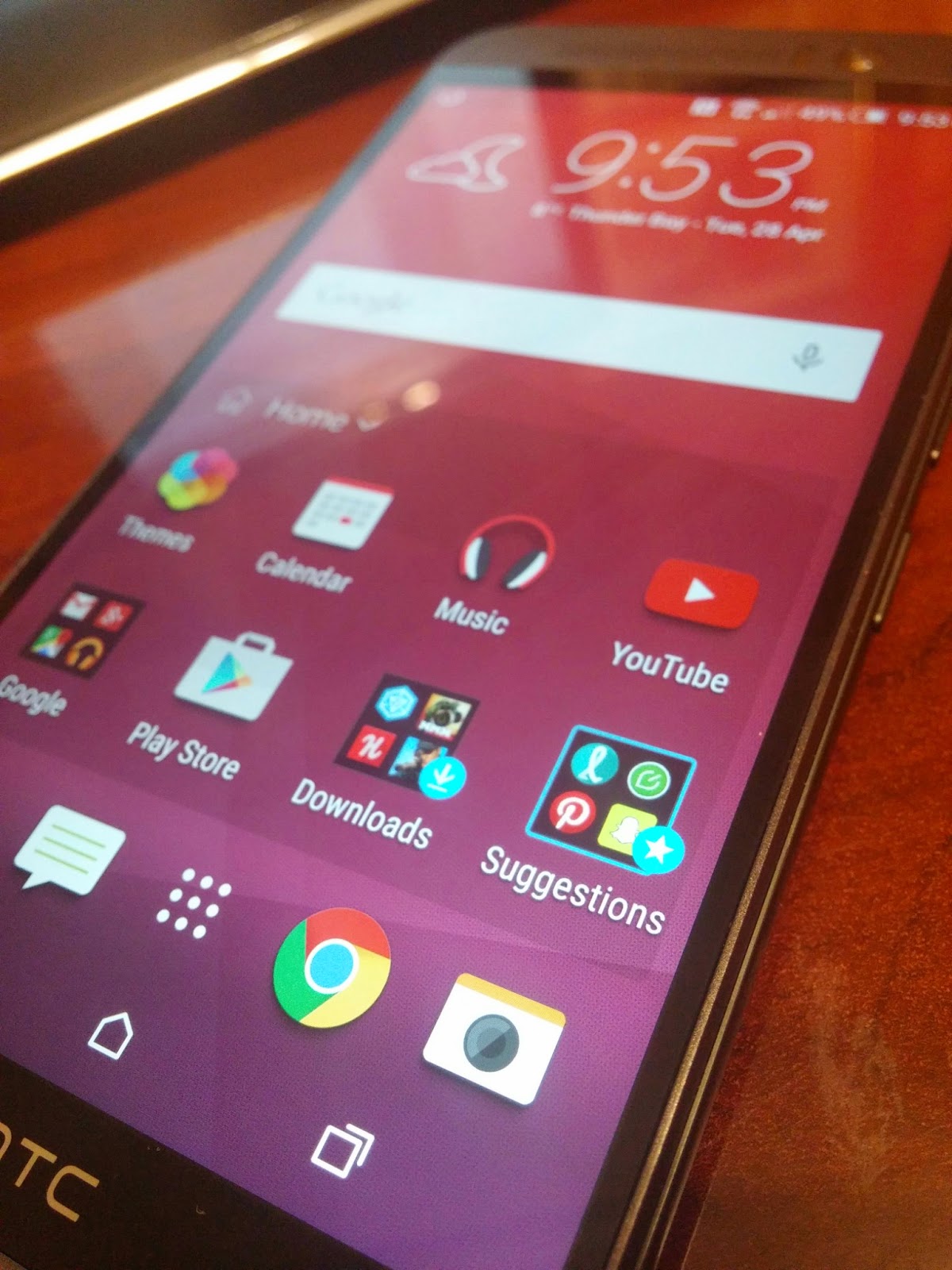 Okay, let's turn it on and see what HTC Sense feels like.

Before it's even finished booting you'll notice the one thing that really sets this phone apart from any other:  the BOOM SOUND.  If you've not had this kind of speaker before it'll really hit you right in the face with the quality.  I'll get more on the speaker later.

It's clean, and not so cluttered.

Initially you'll notice the homescreen has a widget that has a mini app tray that will adapt to whether you're at home / work / out, and place some apps in there that you want as well as stuff it feels you might like.  This is nice, as more and more we're hoping our phones are learning from us to provide us with what we want when we want it.

The app drawer still scrolls up and down like it's Android 2.x - something I still have a hard time adjusting to when I see it.

Blinkfeed is still off to the left and although I didn't use it much, it is very nicely laid out and I know many users who rely on Blinkfeed for their daily intake of news and info.

Now, how about bloat?  I counted 10 apps from HTC (aside from the basic apps like gallery, camera, music...) and 4 3rd party apps. 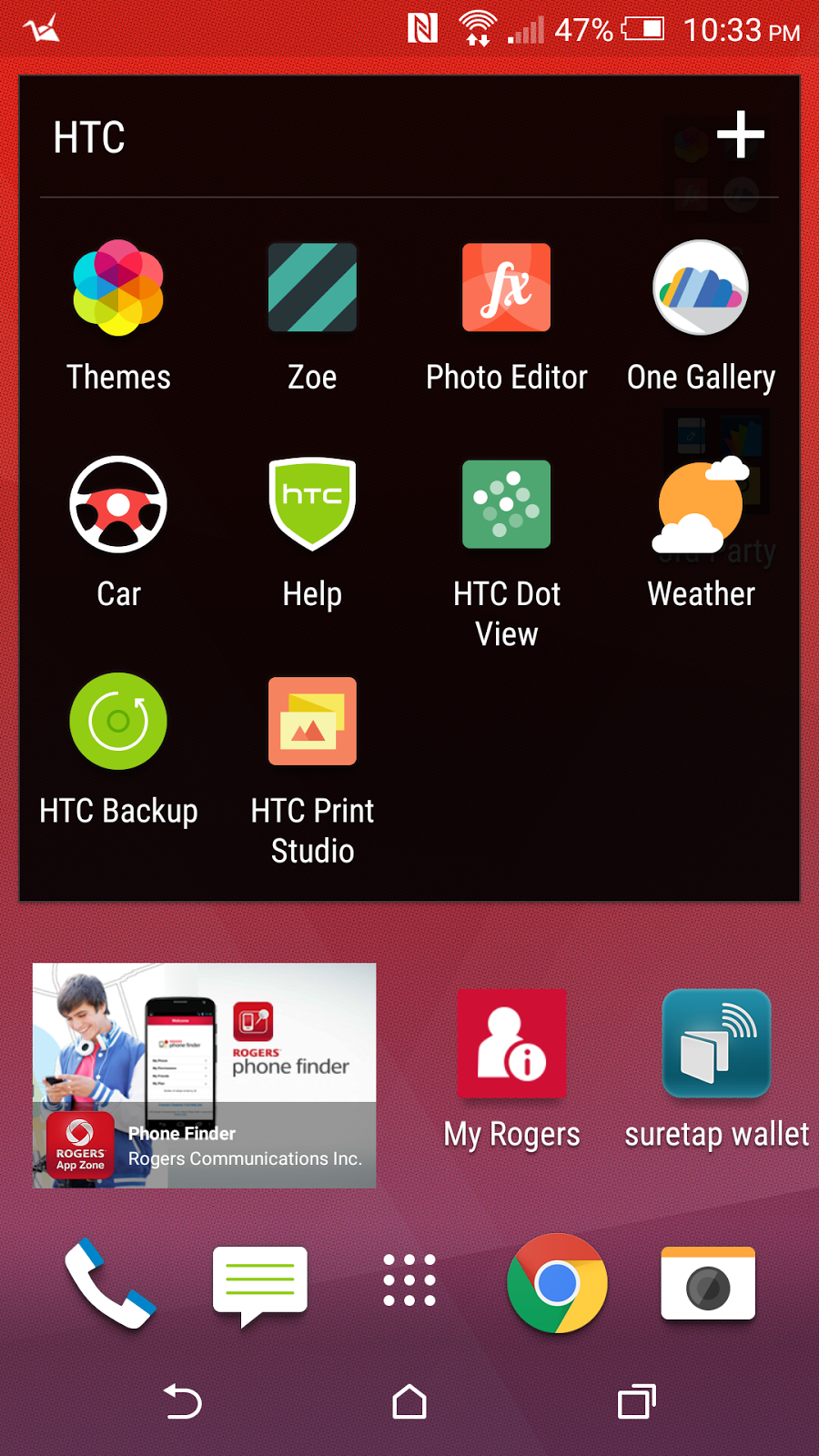 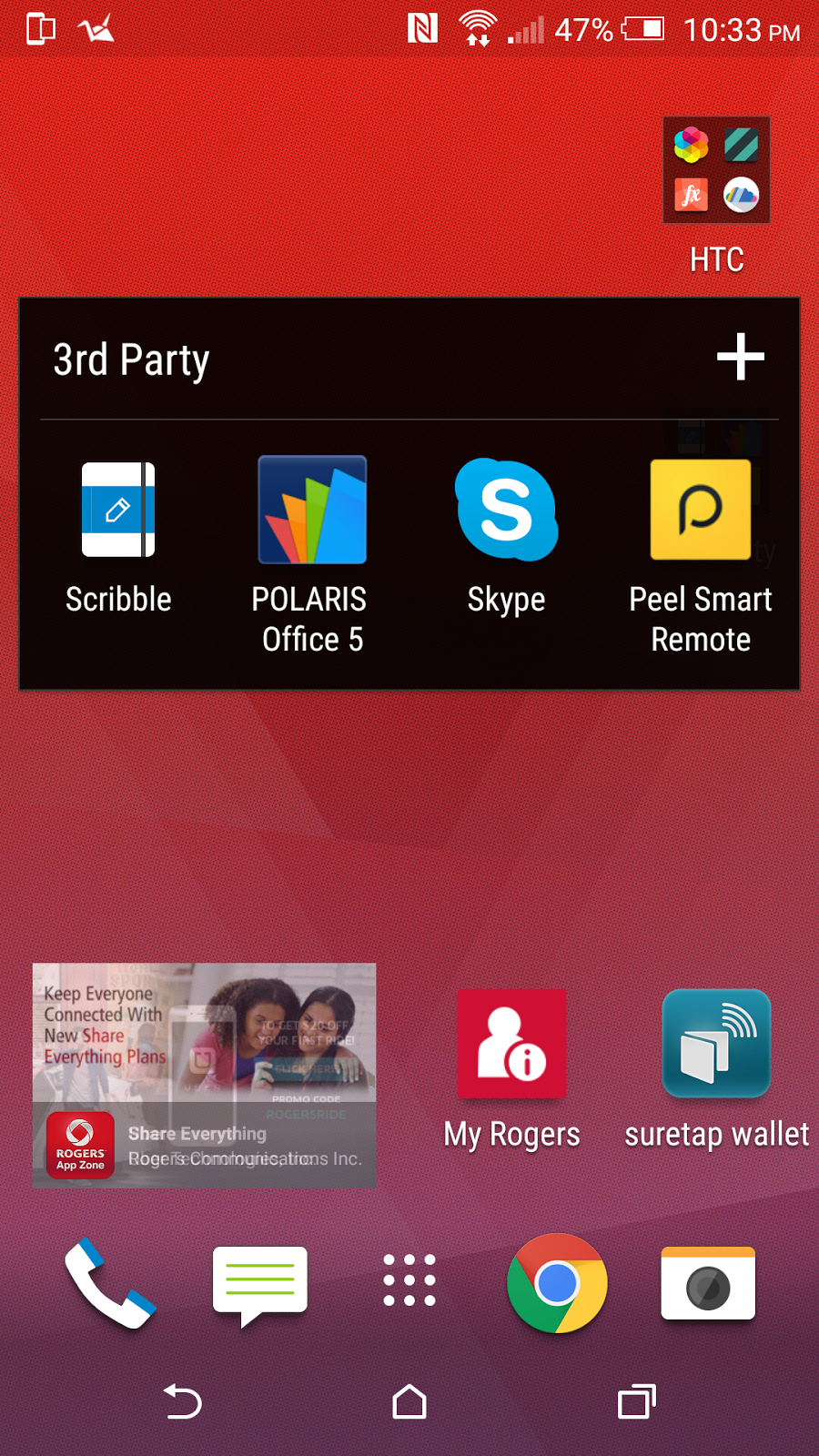 For the HTC included apps you'll get their standards like Zoe, HTC Dot View, Car and Weather, but you also now have Themes and a newer Photo Editor, One Gallery (for including your online photos) and what I think is cool, the Print Studio to order prints of your snaps.

Because of the infrared port, it comes with Peel - I love that app.

Also, if you use Drive (and if you don't, you should) you'll get 100GB bonus to that account for 2 years.  Make sure you check which account (if you have more than one)!

Using the device has been awesome.  It's an octacore with 3GB of RAM.  It flies through just about everything.  To test it out I usually use some heavier 3D apps and really push it.  Not only does it work swimmingly while you play, you'll notice something else.

The sound feels 3D... because I've been using a device with only one speaker it's so unique to get stereo sound.  Not only is the sound crystal clear and loud (really... I have to keep it at bare minimum volumes) having true stereo sound (unlike the Moto X) it really adds to the experience of the game.

Last but not least, let's talk about the camera.  It seems to be the 'make or break' feature on a phone these days.

The camera although it looks pretty basic, it actually has some nice features.  You can have selfies, normal or panorama... and then you can even download more (right now it's a little limited). 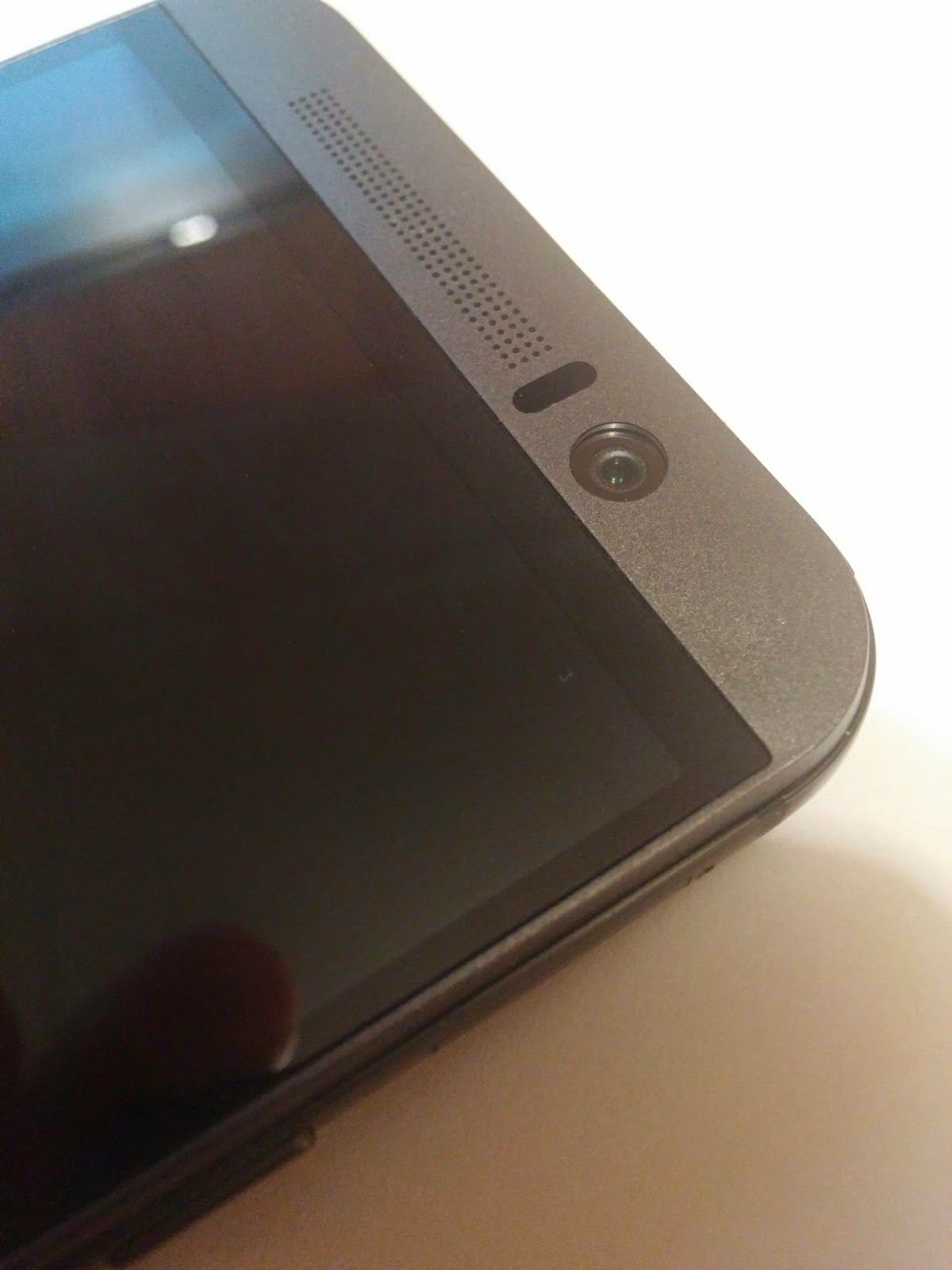 Remember the great thing about this device is that the selfie camera is using their UltraPixel.  So you'll have much better work at getting your shots of you at the bar (i.e. low light).

Controls for the camera are pretty simple if you want, but then you can also play with a lot of manual settings, like shutter speed, ISO, etc... that's very nice for me where I start to miss my SLR. 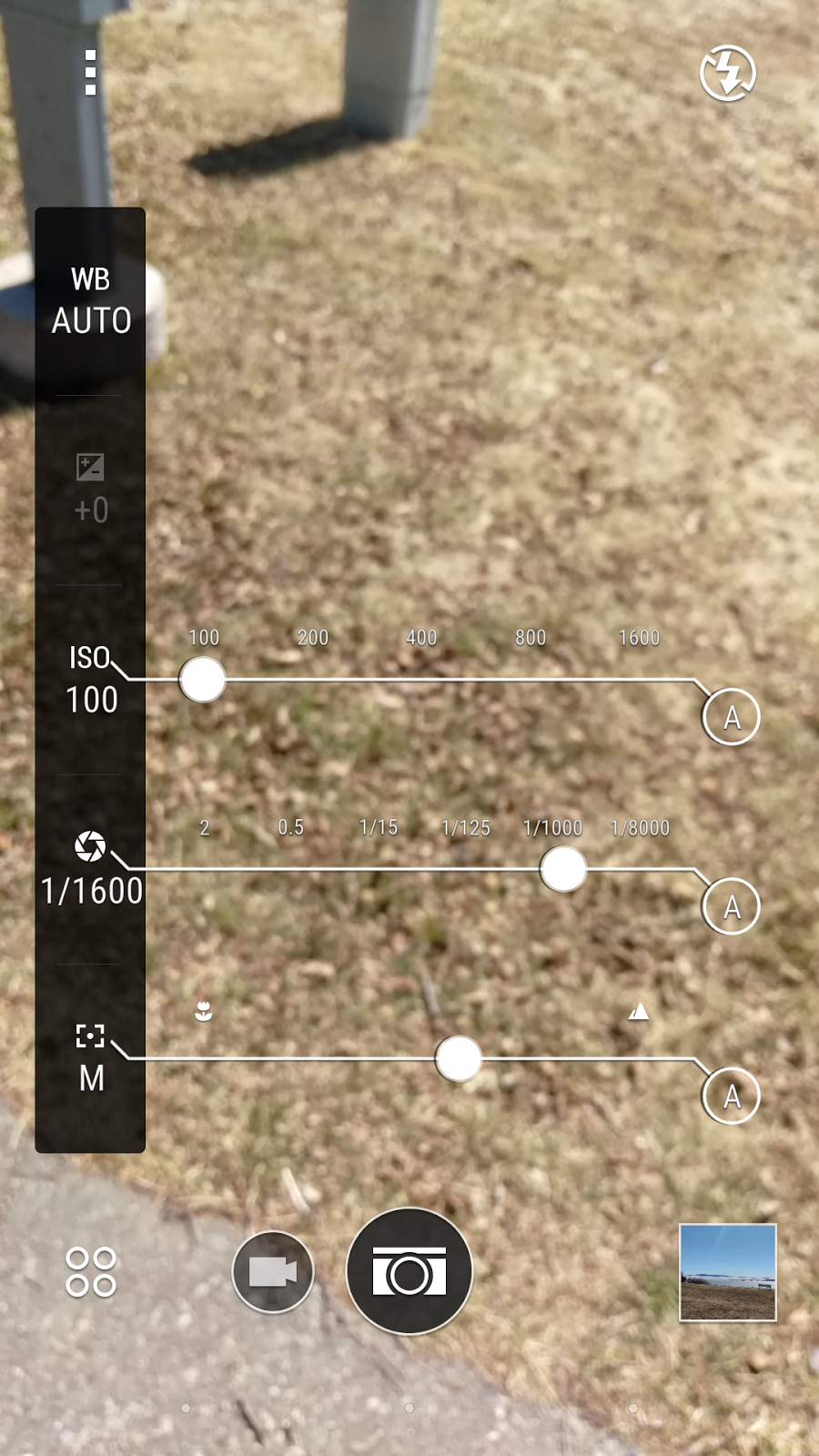 
On the video front it's also pretty straight forward and does a pretty clean job of it.

allowing up to 4K as well


After you've taken the photo you can edit it with either the photo editor app or put it into a Zoe.  A Zoe being a little mini clip of pictures and videos to a simple soundtrack.  What you'll notice is that terminology of the filters used in either are similar (to help you select the right theme).

This is a very well rounded device... really the only con I can come across is that the notification LED is pretty teeny tiny.  Oh, and the battery stats doesn't have a graph or anything.

It performs very well, the battery lasts and the sound... oh the sound.  Really, if there's any one feature you'll get this phone for it's that speaker.  Sure, the ultrapixel selfie cam is pretty good - but it's not the buy feature.

What you'll get this phone and use and continually remember will be how it sounds and how anything else sounds inferior now. 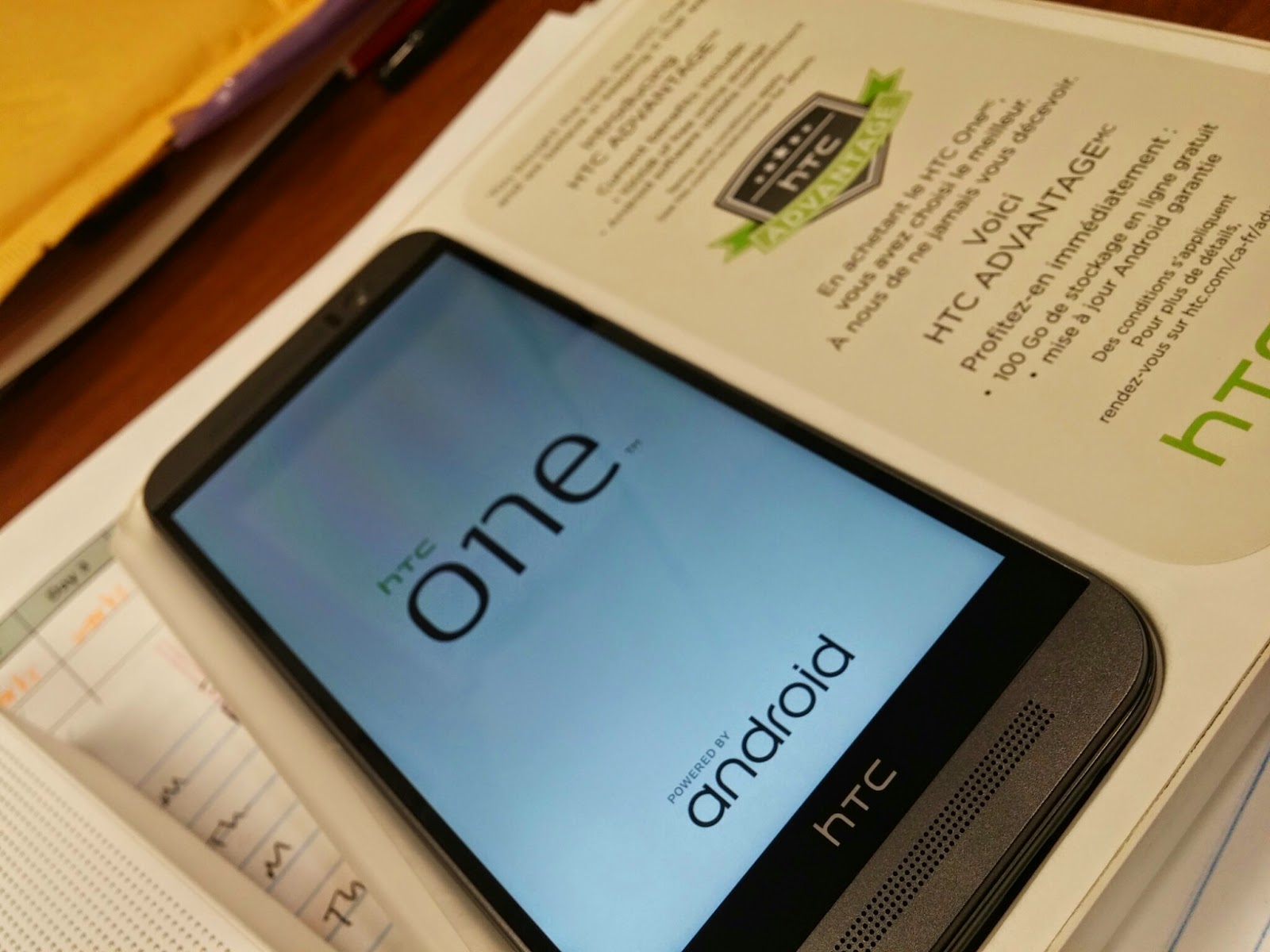