What are the manufacturer breakdowns of what the carriers carry?

But after seeing all the reports recently about how Android is still #1 for sales and shows off the breakdown by manufacturer, it got me wondering.  If Android is #1, but Apple is still the lead manufacturer, what is the breakout of each OEM for Android... we had a bit of a discussion about what we saw anecdotally with the team (we were wondering how big a marketshare OnePlus took - and we now are finding out that it had 1 million phones)... but if had me even more curious.

We know Samsung is the number one sellingest phone for Android, but is that because the carriers are carrying more (and usually from what I've seen, pushing it more... usually because it's just the most 'familiar').

So, in addition to doing what I do just about every month, where I collate all the carrier costs for devices (you know, in the database tab on this site) and then I did some quick tallying (which took me the better part of the weekend actually) to figure which carrier was carrying the most of what (just based on models, not actual stock levels). 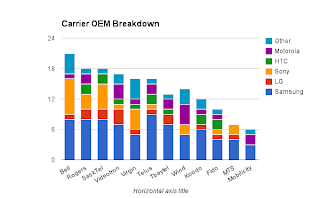 I have it all broken down in this chart (I've embedded it below as well) which compiles to the graph on the right here.
Again, to be clear, this is just a listing of which OEMs the carriers are carrying and how many of each they are carrying.  Often you'll see one line being only having 1 option... like LG, there's really only the G3 and the remaining stocks of the Nexus 5 kicking about (although there is the new F60 offered and the G2 is still available).  So there's no way that they could compare to Samsung's potential 13 phones on the market currently.

I have to say, I'm still impressed that carriers still have the S3 available.  Weird.

Of interesting note, I also clumped together brands like Huawei, Kyocera, ZTE and Alcatel together as "other".  I also looked at the 'average outright cost' of handsets for the carrier as a whole; and typically those that had lower average costs had higher percentages for the 'other' brands.  Really, it makes sense after you think about it for a half second, but it was interesting to see (of course Bell was the outlier there, with a 'high' 19% in 'other' yet is also in the middling range for average cost).

I mentioned that often carriers tend to push what they know.  Having worked at a store I know that first hand... often a certain brand wasn't even mentioned in days; and I had to speak up to some of the associates to mention some of the features of one brand and another and how it compares to the one they commonly talked about.

But maybe there's something to Samsung's strategy of releasing 13 different models.  All that branding around a store is probably leading the customer to a sense of security and trust.  "Why should I trust Motorola... there's only 1 phone of theirs here, but Samsung has 6.  Obviously Samsung knows what they're doing."  Is what I imagine them saying.

Anything else that this data might say to you?  I'm always loving to look at data and seeing what info it can tell me.