Androids version numbers as of September

Posted by Ryan Moore on September 11, 2014
Okay, I've had to do something with numbers and it's like nails on a chalkboard to me.

What used to happen was that Google would collect data over a month period and report on that for the Android Distribution.  So I made a nice chart, each column for a new month.

Except in the past few months they've been blurring which month it was (like ending in the first week of the new month), and more recently it's data pulled only from a week.

So what should have been the 'August numbers' were actually collected Sept 2 - 9.  So I can't call it August.  And I really don't want to go back to the historical data and start trying to pull out what dates... ugh, nightmare to try to keep track of it properly.  The OCD in me is starting to scream.

But here's how it looks 'currently'.

TL;DR - 1 in 4 users are on the most recent OS version (4.4.x) with more than 3 out of 4 being in the Google Now era (which I consider to be the most recent as there's not a lot missed for feature wise between the >4.1 versions) 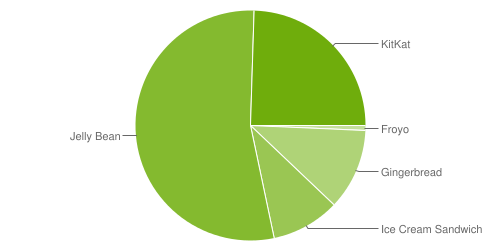 But you know me... I gotta have more data than that.  I like to look at that change.  So here's my graph of keeping track.  And where it really pains me is that I'll just leave August 'blank' (well I'll put in the same data.

But that might be hard to start to look at, so I've also got it as a multiple line graph:

This is just the graph of the 4+ growth, and what I'm looking for is steeper climbs, and again, we see a steep steep climb with 4.4.  Only one spot on Jelly Bean (4.1) did we see as steep a climb.

Check out all the data I've collected at:  http://www.androidcoliseum.com/p/databases.html