Which watch will you wear [poll results]

I'm having a tough time pulling the trigger on a new Android Wear device.  I know what I want, but I have this inane fear that I might get "buyer's remorse".  Is there something in the DSMV about that kind of fear?

And this is where the community comes in and we all chime in about what we like and why we're getting what.  Or in some cases, why we're not buying at all.  All valid points.

So, I've tabulated your answers in our poll, and let's have a look. 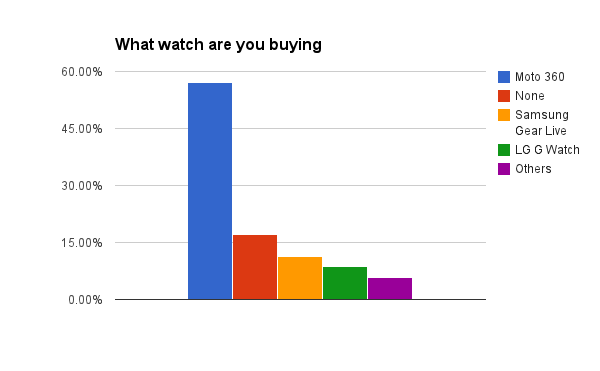 That's a lot of Moto 360 units, and it hasn't even been announced.  See, my choice is the G Watch.  I'm not a fan of the curves of the Samsung, and the 360 looks HUGE.  But that's just my opinions... but with less than 1/10 of you on the same page is me ... it doesn't help my 'cognitive dissonance' whatsoever.

(surprisingly, a lot of those who said the 360, actually bought another device 'until' the 360 is available... interesting)

So let's dive into the 'why'

Moto 360
Why?  Circular is the #1 answer here... the design and look is what's really attracting folks.  it looks like a 'real watch'.   There were a few Qi reasonings thrown in as well.

None
Expense and perceived lack of benefit is the main cause here.  For most, the phone is enough.  Couple that with a lot of us have gone a long long time without wearing a watch at all... so having to strap on a new thing is not something many would like to go back to.

Gear Live
The reasonings weren't many here, but for those who answered the option of having a heart rate monitor was the deciding factor.

G Watch
Funnily enough colour was one of the bigger answers.  More interestingly was that this was the watch folks would purchase and wait for the 360 (if you're only going to use it in the interim, why not go for the cheaper one?!)

Other
The few answers here were for the Gear Fit, and the main reasoning is they wanted something specifically designed for 'fitness tracking' first, and Smartwatch features after.