Which Aspect Ratio are you shooting in? [poll results]

With more and more of us using our phones to capture our memories, and less and less are we printing, but displaying photos on a TV or similar... the old 4:3 standard shot is not as widely used.

But 15MP should be more than enough detail right?  Well, what are you using?  That's what I asked last week, and here's how you answered:

Overwhelmingly most of you are shooting for the end display. 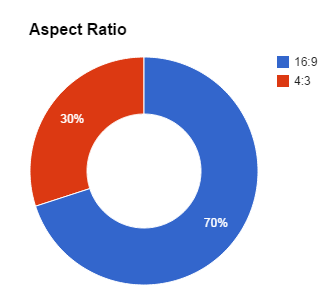 I guess I'm just the 'photo-snob' as Cass liked to phrase it.  I wanted the maximum resolution and I can always crop away later (like most of you who did choose like I did suggested).  One interesting point someone made was that in 4:3 you get to see the full frame in your 'viewfinder' screen.  With some screens and menus, using 16:9 means some parts of the shot could be obscured with a setting or menu icon.

Those points aside, the majority always have the end display as their main reasoning for shooting at 16:9 resolution.  The next reason stated by many was that at lower resolution (yet still very good quality) the JPGs were smaller in size, thus allowing for more photos per card, or not having to 'cleanse' their phone periodically.

So will this mean we'll start seeing photo sensors in 16:9 ratios soon?  What do you think?  It might make sense as if we're only viewing them on 16:9 displays, it would reason that that's how we should shoot.  Using 4:3 in the olden days even meant that we could get prints at 3x5, 4x6, 5x7, 8x10 (notice how the ratio is inconsistent, it was a kind of nightmare).